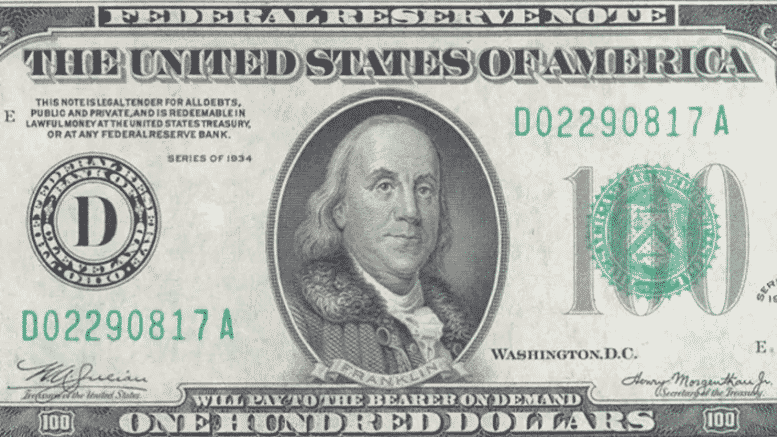 Please Share This Story!
PDF 📄
The author does not have Technocracy in view, but only in name. Technocracy will force the extinction of cash in order to build a replacement monetary system to finance Sustainable Development that will resemble Alice in Wonderland. ⁃ TN Editor

Before I show you what I’ve learned about a plan to seize control of America’s money, let me make one point clear…

If you value sound money and political freedom… if you value limited government and taxation with representation… and if you value enterprise and privacy… then you’re going to hate the future I’m about to describe.

There is no philosophical or monetary middle ground on the issue.

You’re either with it or against it.

In March 1933, Henry Morgenthau Jr., chairman of the Federal Farm Board, was sent a short memo titled, “Memorandum on Banking Reform.”

It was signed by Frank Knight (the acknowledged author of the memo), Garfield Cox, Aaron Director, Paul Douglas, Lloyd Mints, Henry Schultz, and Henry Simons. All of them were professors at the University of Chicago.

The memorandum advocated for full-reserve banking (FRB) in the U.S. monetary system. U.S. currency would be backed only by government debt, not bank debt (loans issued by commercial banks to private citizens and companies).

Under this kind of system, banks could no longer “create” money by lending it into existence. Money creation would be the exclusive territory of the government of the United States.

In this system, the key government agencies could not create money through new lending. They would do so through new spending (on priorities determined by elected politicians).

They called it “The Chicago Plan.”

The most radical elements of the plan – which we’ll discuss shortly – were left on the shelf nearly a century ago.

The End of Fractional Reserve

Before I show you what the implications of a modern Chicago Plan would be, it’s important you understand how money creation works today.

Despite what you may think, the central bank (the Federal Reserve) doesn’t print that much money. The vast majority of the money supply in the U.S. economy is grown by banks lending money into existence.

Commercial banks issue a loan, it appears in your account, and just like that… it’s money. From nothing, something! And then there was cash!

But here’s the other part of that process that most people don’t realize. When the banks issue a loan, they don’t have to have a dollar in cash in their vaults for every dollar in cash they lend. If they DID, then every loan to a new customer would be matched with an equal amount of savings already in the bank from another customer. That’s “full reserve” banking.

What we have today is called “fractional-reserve” banking. Why? The amount of cash savings actually held by the bank is only a fraction of the money lent by the bank. And for each dollar in saving deposits held by the bank (your money), the bank can lend up to $10 in new money (this is the secret magic of money creation).

It’s also what some people call “debt-based” money, because money is created when a new debt is born (in the form of a bank loan).

Proponents of the Chicago Plan contend that allowing banks to create credit in a fractional reserve system leads to credit cycles. And the credit cycle has booms and busts. The busts damage everyone, not just those who have borrowed and spent too much.

That’s a problem, they say. To circumvent it, there are those in power actively trying to end the banking system as we know it. They want to go back to the original idea of the Chicago Plan. And then they want to go one step further and replace America’s money with something else entirely.

The main feature of the Chicago Plan is that it moves credit creation from private hands to public (government) hands, with the average American unaware of who is really moving the government hands. Money isn’t lent into existence. It’s spent into existence.

You can imagine that he who does the spending in this system has great power. That’s exactly the idea!

Under the plan, instead of stimulating growth by changing the price of money for commercial banks (which is how monetary policy currently works with the Federal Reserve and interest rates), the government would “spend” money into circulation – on public works and infrastructure projects, for example.

The quantity of money in the economy would be determined by the government, not the commercial banks. And, at least in theory, the government would enjoy vastly lower levels of debt (both absolutely, and relative to GDP) in this kind of money system. Why?

In the current system, the US Treasury raises money by selling bonds to commercial banks or the Fed, paying interest to both. Money is created by borrowing. But again, it’s debt-based money. That wouldn’t happen in the new system. But what would the new money be backed by?

The term “full-reserve banking” implies every unit of currency is backed by an actual reserve. Some advocates of full-reserve banking (including a handful of Austrian economists) believe you could back the money with gold. Thus gold would be restored as the most important reserve asset in the world.

But if your agenda is to spend money into existence in unlimited quantities, you can also use government debt as a reserve asset. There’s a lot of it already. And you can always make more!

In fact, this is a key feature of the Chicago Plan. It’s full-reserve banking where the government does all the money creation, “backed” by government debt. The commercial banks merely provide payment services or pay interest on deposits. They are forced out of the debt-based money creation business (where all the profit is, of course).

According to the theory, this new American money system would accomplish three things…

Does that sound like an improvement on the current system to you? To some people, it all sounds somewhat appealing, until you look closer…

Let me explain what I mean and why that’s so important for the value of your savings and investments today.

Under the Chicago Plan, money doesn’t have to have its roots in real value-added labor. Money doesn’t come into existence because a tradesman has created something useful and sold it to someone else, requiring money to make the transaction.

And under the new system, money certainly doesn’t have to be anything physical and scarce, like gold.

Under the new system, money can be whatever the government wants it to be.

Think of all the jobs and incomes created when a monetarily sovereign government decides to spend trillions on new infrastructure and “nation building” projects.

This is Richard Duncan’s “creditism” without the need to borrow. It is economic growth without effort, wealth without labor, riches without risk.

If you think it sounds absurd, you’re not alone. But remember what’s at stake here: total control of American money, and through it, of the economy, and of you. And it’ll be accomplished by controlling the quantity of money through a central authority.

For an idea of what that might look like – and why it’s so dangerous to your cash and savings today – consider this quote from the innocuously titled “The Case for Unencumbering Interest Rate Policy at the Zero Bound.”

It was delivered by Marvin Goodfriend of Carnegie Mellon University at the Fed’s annual retreat in Jackson Hole, Wyoming in 2016 (emphasis added is mine):

The most straightforward way to unencumber interest rate policy completely at the zero bound is to abolish paper currency. In principle, abolishing paper currency would be effective, would not need new technology, and would not need institutional modifications. However, the public would be deprived of the widely used bundle of services that paper currency uniquely provides.

[…] Hence, the public is likely to resist the abolition of paper currency at least until mobile access to bank deposits becomes cheaper and more easily available.

First, we have a proposal for a new system in which only the government can create money. Next, the “experts” think the most logical way to “unencumber” ineffective monetary policy is to abolish cash.

Goodfriend, by the way, was nominated by President Trump to serve on the Federal Reserve’s seven-member Board of Governors. His nomination is currently awaiting action by the U.S. Senate.

Taken together, there is a real effort underway to do away with your individual economic liberty and your preference to hold cash in the face of interest rate uncertainty. “If that could be overcome,” Goodfriend seems to be saying, “then we could make you act the way we want you to.”

Am I exaggerating? Would Wall Street allow such a fundamental change to America’s banking system? Would the Fed really abolish cash? Is there a possibility of all of this becoming a reality?

It’s happening faster than you think.

For example, the Swiss recently voted on implementing a version of the Chicago Plan earlier this month. They ultimately voted it down, but the fact that such a plan was considered in the first place shows that this idea is coming back into the mainstream.

Also, keep in mind that the Swiss, due to their constitution, get to vote on these kinds of things. It’s a direct democracy, controlled at the local level. Top-down change – the kind of change which tends to benefit the elites and those in the shadows of power – is very hard to achieve in Switzerland. But in the United States…?

What would it take for elected officials, and the American voters, to decide that the banks can no longer be trusted? What would it take for politicians and voters to agree that it’s time to end “too big to fail” banks and change the financial system so “the people” (through their elected officials, of course) can be in charge of the money system?

The catalyst could come from anywhere, or nowhere. And if you think it’s out of the realm of possibility, then you lack imagination, or an understanding of history.

In Defense of Economic Liberty

In a world where government has unrestricted control of the money, and hiding in physical cash is no longer an option (because cash has been abolished), there’s no end to what a monetary sovereign could force you to do.

Control of money is a massive political power. What would happen next?

Forcing negative interest rates (effectively a tax on your savings)?

Banning the purchase of items that the government deems undesirable, like weapons, alcohol, or cigarettes?

These may seem far-fetched scenarios. But they are well within the realm of possibility for a government in complete control of the money in your account.

This was the plan in 1933. It almost happened. I believe it is the plan today. And I believe it WILL happen. Much sooner than you think. Which is why you must plan for it NOW.

This is not a theoretical debate. What, exactly, is at stake for you right now?

This idea of sovereign money appeals to central planners because with it, they have absolute authority and permission to try and solve any “problem” they deem a threat.

When you pair it with banning cash and going all-digital, you have nothing less than the complete loss of economic liberty and freedom of action in America. THAT’s what’s at stake here. Right now.

And to some people, freedom still matters in America.