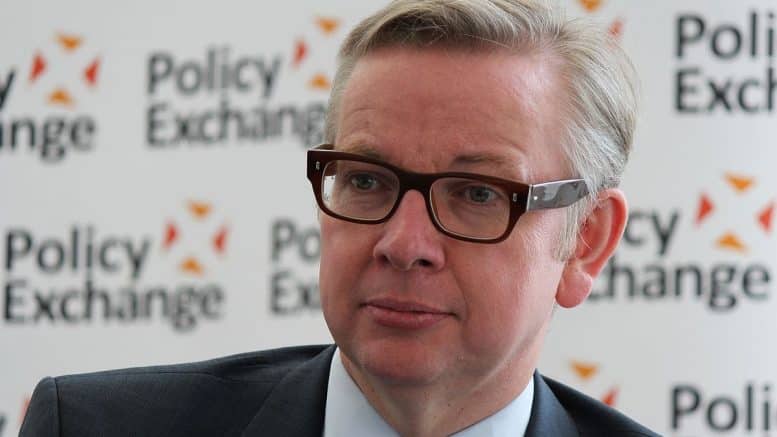 Technocrats are in process of solidifying the lie that CRISPR technology can be used on animals to “accelerate the process of breeding and evolution”, as if there were no risks involved and that the animals with altered genes were functionally equivalent to their naturally-bred counterparts. This is simply not true. Secondly, it should be noted that Brexit is giving way to these Technocrats, including Prime Minister Theresa May, who was identified as a Technocrat even before she took office. (See here.) ⁃ TN Editor

Genetically-modified animals could be sold in the UK after Brexit, Michael Gove has said.

The Environment Secretary said that “bio-tech changes” are coming which will “challenge us to think about the future” as he suggested gene editing could be used to create “more valuable livestock”.

But he admitted that the science was still “in its infancy” and that its use would raise “political and moral questions”.

Meanwhile, he also revealed the Government intends to create a new “gold-standard” for food labelling to signify British quality after Brexit.

Mr Gove made the claims as he announced plans to reward farmers for opening up the countryside to the public and enhancing the natural environment after the UK’s withdrawal from the European Union.

He also set out proposals to replace existing EU subsidies with a system that pays farmers to increase public access to the UK’s countryside.

Outlining his plans for a “green Brexit”, Mr Gove suggested that after Brexit the UK would have the opportunity to take advantage of new technologies which have the potential to dramatically change the way the nation produces food.

In a speech to the Oxford Farming Conference, he said: “These technological breakthroughs raise political and moral questions as we consider how we deal with the transformation of a huge range of existing jobs.

“And alongside these changes in the world of information technology there are bio-tech changes coming which also challenge us to think about the future, and how best to shape it.

“Gene editing technology could help us to remove vulnerabilities to illness, develop higher yielding crops or more valuable livestock, indeed potentially even allow mankind to conquer the diseases to which we are vulnerable.”

Mr Gove said gene editing – a form of genetic engineering which involves changing or removing parts of an organism’s DNA – could allow farmers to “accelerate the process of breeding and evolution” to create a better quality of livestock.

The need to “expedite” evolution is already seeing it’s way into all creatures, plant, animal and fungus as well as virus. These “intellectuals” don’t seem to understand the web of life and it’s interrelationship between all living things. They’ve crushed the chain for decades and they have learned nothing while nature has taken a beating. These people belong on their own planet away from earth if they want to experiment with manufactured life forms as they have no clue of the permutations of what the produce. Bioinformatics was to track this phenomenon but there is no database big enough to… Read more »

The UK Column has been reporting that the UK is systematically dismantling its military transferring significant assets, such as nuclear submarines, to the new EU military regional military force. If this signals Brexit is a globalist head fake, one wonders if GMOs in the UK food supply will become a foot in the door for GMO food in the EU.