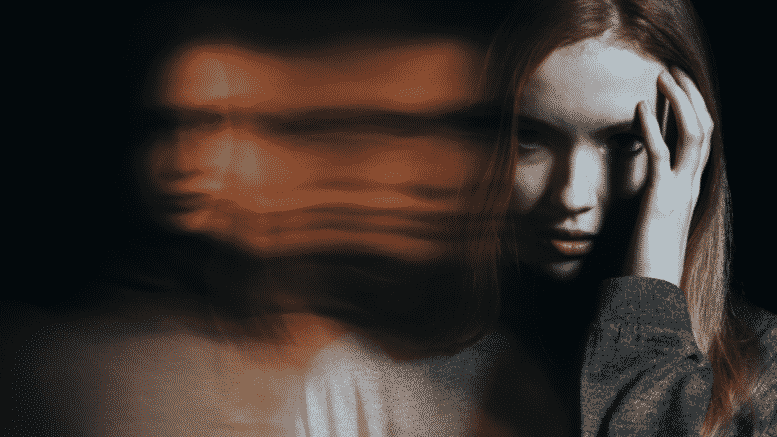 Please Share This Story!
PDF 📄
Hearing voices in your head? Hallucinating? It is likely a byproduct of pandemic policies like constant fear mongering, social exclusion, lockdowns, wearing masks, etc. As a result, suicide rates are skyrocketing and lives and families are being ruined for years or decades. Literally, the “madness” must stop! ⁃ TN Editor

Cases of psychosis have soared over the past two years in England as an increasing number of people experience hallucinations and delusional thinking amid the stresses of the Covid-19 pandemic.

There was a 75% increase in the number of people referred to mental health services for their first suspected episode of psychosis between April 2019 and April 2021, NHS data shows.

Much of the increase has been seen over the last year, after the first national lockdown, according to data analysed by the charity Rethink Mental Illness. More than 13,000 referrals were made in May 2021, a 70% rise on the May before when there were 7,813 referrals.

The charity is urging the government to invest more in early intervention for psychosis to prevent further deterioration in people’s mental health from which it could take them years to recover.

It says the statistics provide some of the first concrete evidence to indicate the significant levels of distress experienced across the population during the pandemic.

A study earlier this month found that anxiety and depression around the world increased dramatically in 2020, with an estimated 76m extra cases of anxiety and 53m extra cases of major depressive disorder than would have been expected had Covid not struck. Women and young people were disproportionately affected, the researchers said.

Psychosis can involve seeing or hearing things that other people do not (hallucinations) and developing beliefs that are not based on reality (delusions), which can be highly distressing. It can be a symptom of mental illness such as schizophrenia, bipolar disorder or severe depression, but psychosis can also be a one-off, potentially triggered by a traumatic experience, extreme stress or drug and alcohol misuse.

Despite the continued pressure on mental health services, Rethink Mental Illness is highlighting the importance of rapid access to treatment to prevent further episodes of psychosis and reduce people’s risk of developing severe mental illness.

Nice guidelines for people experiencing a suspected first episode of psychosis state they should receive an assessment within two weeks. However, the charity fears that if the increase in referrals is sustained, more people will have to wait longer for vital treatment.

Brian Dow, the deputy chief executive of Rethink Mental Illness, said: “Psychosis can have a devastating impact on people’s lives. Swift access to treatment is vital to prevent further deterioration in people’s mental health which could take them years to recover from.

“These soaring numbers of suspected first episodes of psychosis are cause for alarm. We are now well beyond the first profound shocks of this crisis, and it’s deeply concerning that the number of referrals remains so high. As first presentations of psychosis typically occur in young adults, this steep rise raises additional concerns about the pressures the younger generation have faced during the pandemic.

“The pandemic has had a gamechanging effect on our mental health and it requires a revolutionary response. Dedicated additional funding for mental health and social care must go to frontline services to help meet the new demand, otherwise thousands of people could bear a catastrophic cost.”

“The pandemic has had a game changing effect on our mental health and it requires a revolutionary response. Dedicated additional funding for mental health and social care must go to frontline services to help meet the new demand, otherwise thousands of people could bear a catastrophic cost.”

Exactly what the PLANDEMIC predators were after, among other things, when they released the virus–death, destruction, profit and control that provides compliance from the weak links in humanity–children mainly. More weak links mean more dependency. Dependency means control. So adults…

SHAKE IT OFF and BECOME PERSONALLY RESPONSIBLE for helping your children.

Mass hysteria is targeting women because they don’t want young women reproducing like in Africa… DEPOPULATION is the agenda 21! NHS is completely corrupt, evil, strong arm of the devil denying routine medical care, murdering under the cover of the unholy covid (certificate of vaccination identification), drugging the populace into somnolence, distributing the murderous RNA altering concoctions at Gates’ orders. People need to get a grip and STOP LOOKING THEM IN THE EYE when they’re killing granny?

This is what happens worldwide when people reject the God of the Bible. Mental health problems do not come from the brain but the heart. The drugs along with YOGA these people are taking for their so called mental health problems cause suicidal thoughts among other problems. The second problem is psychiatrists whom most are drugged up themselves and are atheists to boot! What good are they? Not good at all. These people need Jesus!

While undoubtedly the covid restrictions have played a major part in creating mental health problems let’s not forget that 5G is being implemented all over the UK (and much of the world). Some years ago I was living in a house only about 50 yards from a powerful telecomm mast. My partner, who had no history of mental illness became psychotic .. the whole bit, with voices etc etc and had to be committed. It took a year of medication to bring him back. He returned home .. it happened again .. another year to recover. We moved. I later… Read more »

I am concern that this could be used against the unvaccinated, diagnosing them as having “delusional thinking” particular if they talk about The Great Reset or Technocracy. Reminds me of the old Soviet Union.

Yes. Psychosis. You people are crazy sort of thing.

The entire scamdemic is the result of engineered mass psychosis… thus the uptick in persons reckognizing it and seeking help ? Original article has a retraction : The uptick is 29% not 75% .