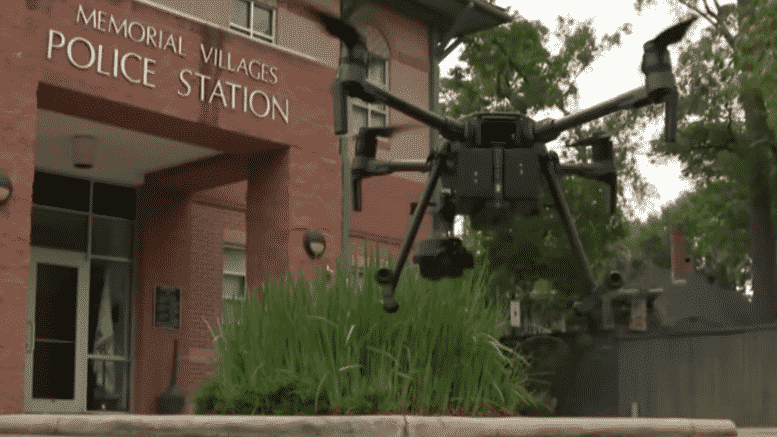 Please Share This Story!
PDF 📄
This spy scheme was implemented as a Public-Private Partnership between the city police department and Paladin Drones, which claims to “deploy drones to 911 calls for instant situational awareness.” This technology will fit into GEOINT and Smart City collaborations for total awareness. ⁃ TN Editor

For years, law enforcement has been claiming that drones will only be used for natural disasters, crime scene investigations, car accidents and rescue operations.

That is the bill of goods, being sold to the public but it is all a lie.

A perfect example of how law enforcement promises the public one thing and after time passes, uses it for something else is taking place in Texas at the Memorial Villages Police Department (MVPD).

Two years ago, Click2Houston reported how the MVPD claimed that they would only use drones for “better emergency response during disasters.” They also used police officer and UAV pilot, Larry Boggus to solidify their claim that drones would only be used for natural disasters saying, “drones are a huge asset for us because very quickly we were able to see the amount of houses that were damaged” during a 2018 storm.

I love it when police department’s provide comic relief to prove my point.

It only took one year for the MVPD to prove that their “Boggus” claim that drones would only be used during emergencies was a lie. (Pun intended.)

Last week, Click2Houston revealed that the MVPD is using drones to respond to home alarms and to identify suspicious people.

“Mark Kobelan, the mayor of Piney Point Village, recently had to call police for a possible suspicious person. Within seconds, a drone was overhead.”

When police use drones to respond to home alarms, don’t think for one second that they will only use them to fly over that particular home. When police respond to a possible break-in using a patrol car, they will typically drive around the neighborhood looking for suspicious people and possible signs of forced entry.

So what do you think police will use drones for?

All across the country there are numerous examples of police using drones to spy on crowds but a Harvard Law School article titled “Drones as Crime-Fighting Tools in 2020: Legal and Normative Considerations” warned that the Boston Police Department’s plan to use “observation warrants” to justify spying on the public is a harbinger of what is to come.

As the video above explains, sending police drones to investigate “potential crimes” means that everyone is a potential suspect. Police will use drones to spy on people’s homes, backyards and streets, looking for suspicious people, essentially turning our Bill of Rights into a paper tiger.

A perfect example of our bill of Rights being turned into a paper tiger is police, Stingrays. Law enforcement has been using Stingrays to intercept millions of innocent phone conversations and texts without a warrant.

Which is exactly how law enforcement plans to use drones.

Police Stingray’s and drones are designed for mass surveillance and do not care if they spy on innocent people.

As Andrew Ferguson, a David A. Clarke School of Law professor warned, “once you have flying cameras available, they will likely be used beyond the pilot project,” Ferguson said. “They will fly more and capture more data. This is a perfect example of how big data surveillance will change the power balance between citizens and police and erode community trust.”