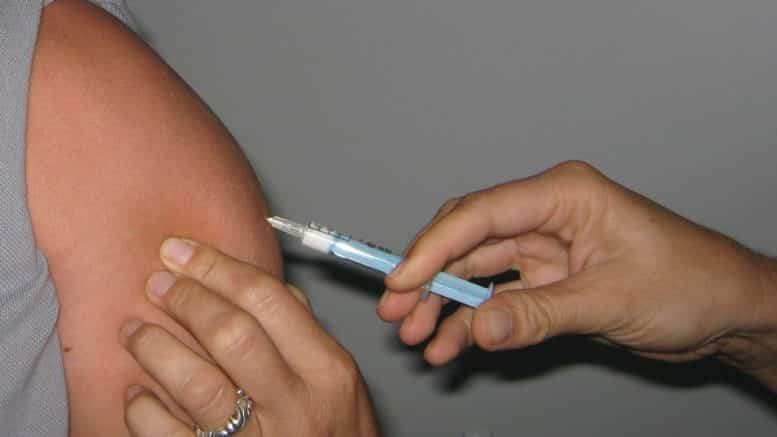 Please Share This Story!
PDF 📄
Citizens are waking up to the dangers of vaccines, even in the face of the biggest propaganda push by Big Pharma in modern times.  Technocrats invent stuff and expect everyone to use their inventions just because they say so. No more. ⁃ TN Editor

Have you gotten your flu shot this year?

If the answer is no – and I’m not getting one! – you’re not alone. A new study finds more than 40 percent of Americans have not been vaccinated and, in fact, don’t plan on it either.

This is despite the warnings, potential dangers, and last year’s record-number of flu deaths. The survey was done by the National Opinion Research Center at the University of Chicago

The top three reasons why they didn’t want the shot were: bad side effects; thinking they’ll get the flu from the shot; or thinking it doesn’t work.

Some think the side effects are worse than the flu itself, but that’s just a myth. Usually the only side effect is a sore arm.

And while it is true that the vaccine doesn’t work 100 percent of the time, the benefit is that it lessens the severity. If you do still get the flu you’re 60 percent less likely to need treatment.

Last year’s flu season, keep in mind, was particularly severe. More than 900,000 people were hospitalized and more than 80,000 people died. Many were adults older than 65, but also 180 children died from the flu.

I’m surprised to see Technocracy News & Trends defend the flu shot. Pretty amazed actually. Tell the people that have gotten deathly ill and damaged that the side effects are not as bad as the flu. And don’t spout that the flu shots are effective, they are not. Come on now. Let’s get real.

Stan – you are missing the point. TN is not supporting the flu shot. The point is that 40% of Americans are refusing to take the shot!

Only 50% of americans are willing to take the new developed vaccine to protect themselves against the coronavirus pandemic. When you look into the many scandals of vaccine campaigns since the 1950´s it is no surprise people have become more sceptic about the safety of vaccines. The Polio vaccine caused cancer and the huge amount of vaccines young children receive today is staggering and may cause injuries of the brains like autism and ADHD. What happened with the Influenza vaccine campaign in the Ukraine, manufactured by the Baxter company in 2009 was probably the biggest scandal of all times. Several… Read more »

I have been a supporter for a long time but any more poorly researched pro-vaccine stories and I’m out of here.

The point of this story is: 40% of Americans are rejecting the flu vaccines. Isn’t that what you want to hear? My comments were very clear about this – “Citizens are waking up to the dangers of vaccines, even in the face of the biggest propaganda push by Big Pharma in modern times.  Technocrats invent stuff and expect everyone to use their inventions just because they say so. No more.”

I think getting a flu shot is a personal decision. We shouldn’t berate those who want to get the shot or put down those who choose to pass on it. I got a flu shot for 3 years and each time I received the shot, I broke out in a red, bumpy, itchy rash mostly on my legs, and a little on my chest. The rash lasted for about 6-7 months. By the time it was about gone, it was time to get another flu shot. I spent the last year reading a lot about vaccines and especially flu shots.… Read more »