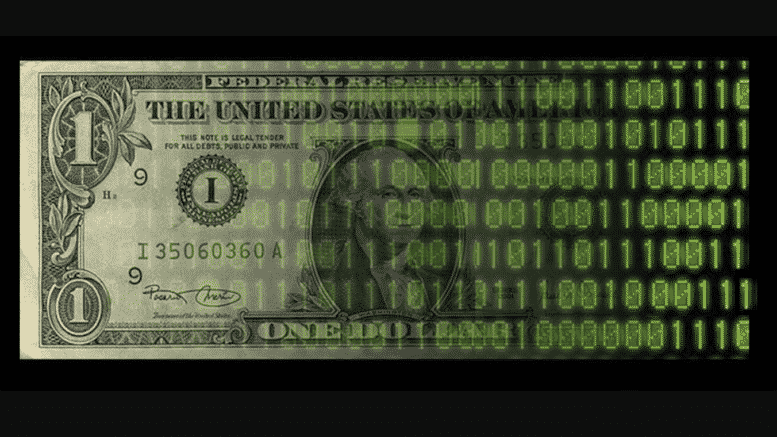 Please Share This Story!
PDF 📄
TN has covered the war on cash as a prime initiative of Technocracy. Technocrats cannot tolerate anonymity or lack of control over any segment of society. Thus, driving cash out of circulation and ultimately replacing it with a digital currency will force every human on earth to hook up to the “system”.

The only insulation against digital currency takeover if physically-held gold and silver, which is in shorter supply every year. The problem with this is that if you wind up spending your hard assets, you will eventually run out with no possibility to replenish them. ⁃ TN Editor

With so much news about an economic reopening, a border crisis, massive government spending and exploding deficits, it’s easy to overlook the ongoing war on cash.

That’s a mistake because it has serious implications not only for your money, but for your privacy and personal freedom, as you’ll see today.

Cash prevents central banks from imposing negative interest rates because if they did, people would withdraw their cash from the banking system.

If they stuff their cash in a mattress, they don’t earn anything on it; that’s true. But at least they’re not losing anything on it.

Once all money is digital, you won’t have the option of withdrawing your cash and avoiding negative rates. You will be trapped in a digital pen with no way out.

What about moving your money into cryptocurrencies like Bitcoin?

Let’s first understand that governments enjoy a monopoly on money creation, and they’re not about to surrender that monopoly to digital currencies like Bitcoin.

Blockchain does not exist in the ether (despite the name of one cryptocurrency), and it does not reside on Mars.

Blockchain depends on critical infrastructure, including servers, telecommunications networks, the banking system, and the power grid, all of which are subject to government control.

But governments know they cannot stop the technology platforms on which cryptocurrencies are based. The technology has come too far to turn back now.

So central governments don’t want to kill the distributed ledger technology behind cryptos. They’ve been patiently watching the technology develop and grow — so they could ultimately control it.

Anyone who controls the money controls political power, the economy, and people’s lives.

CBCDs use the same underlying distributed ledger technology that cryptocurrencies use. But they’re different from cryptocurrencies like Bitcoin, although the differences are often overlooked by the crypto crowd.

Unlike cryptos, CBCDs aren’t new currencies. They’ll still be dollars, euros, yen or yuan, just as they are today. But these currencies will only be digital; there won’t be any paper money or cash allowed. Only the format and payment channels will change.

Balances can be held in digital wallets or digital vaults without the use of traditional banks. A blockchain is not needed; the CBDC ledger can be maintained in encrypted form by the central bank itself without the need for bank accounts or money market funds.

Their greatest appeal is their convenience and lack of credit card transaction fees. Payments can be done with an iPhone or other device with no need for credit cards or costly wire transfers.

Who needs bank accounts, checks, account statements, deposit slips and the other clunky features of a banking relationship when you can go completely digital with the Fed?

An individual Fed account on your mobile phone could also eliminate the 2.5% fees that merchant acquirers charge retailers to process credit card transactions. Payments, in general, would be faster, cheaper, easier and more secure than they are today.

The Federal Reserve has been working with scientists at the Massachusetts Institute of Technology to develop a dollar form of CBDC.

The roll-out of this new digital dollar may still be a few years away, but the implications are enormous. There’s more at stake than just customer convenience.

Railroads were one of the largest sectors of the economy from 1870 to 1930 but were mostly bankrupt by the 1970s. General Motors has been rescued from bankruptcy more than once by the U.S. government.

General Electric was once an industrial giant and now is a shell of what it once was. Oil company stock prices have taken a beating from the threats of the Green New Deal. Things change.

Today banks and other financial institutions dominate stock market valuations alongside the tech sector. CBDCs may be coming for the banks.

A reaction to the proposed change has already begun. Major banks fear they will be completely cut out of the payments system. MasterCard and VISA are also concerned that their payment channels will be made redundant.

Trillions of dollars of wealth in the form of financial institutions’ stock prices for JPMorgan, Citi, MasterCard and VISA could be wiped out as the new digital payments technology takes hold.

You might not have much sympathy for JPMorgan, Citi, MasterCard and VISA, but what do you think would happen to the stock market if they crash?

That’s not the only potential fallout from CBCDs. There’s a dark side. If there is no cash, there is no anonymity.

Governments will know your whereabouts and habits at all times simply by tracking your use of funds through the CBDC payment system.

This can already be done, to some extent, by tracking credit card transactions, but the CBDC system will make state surveillance more pervasive.

China is leading the way with CBDCs. And this kind of surveillance is the real driving force behind the Chinese CBDC.

China already uses facial recognition software, mobile phone GPS tracking and the purchase of plane or train tickets to track their citizens. This surveillance can be used to detect anti-state activities and to arrest dissidents or anyone who doesn’t strictly follow government orders.

Now, China wants to take its CBDC rules and make them the global standard.

Even if the U.S. and Europe don’t agree, it’s likely that many Asian and African countries might agree in exchange for aid from China. That aid can take the form of access to scarce COVID vaccines, for example.

Once China’s totalitarian surveillance software is perfected, they can make it the standard for much of the world and facilitate intrusive 24/7 surveillance by every dictator and autocratic leader in the world.

No doubt China would arrange to have access to the same surveillance information it was providing to client states. The end game would closely resemble George Orwell’s dystopian novel, 1984.

If cash is gone, there is only one way to escape digital surveillance of wealth — physical gold.

Nearly all money is created by banks when they loan it. Money is debt – USURY bearing debt.

They already installed a similar system in Brazil. It’s called PIX. They have data over all pix transactions. The argument is always the same: they will be able to identify frauds…
But we know this will eventually become a surveillance weapon.