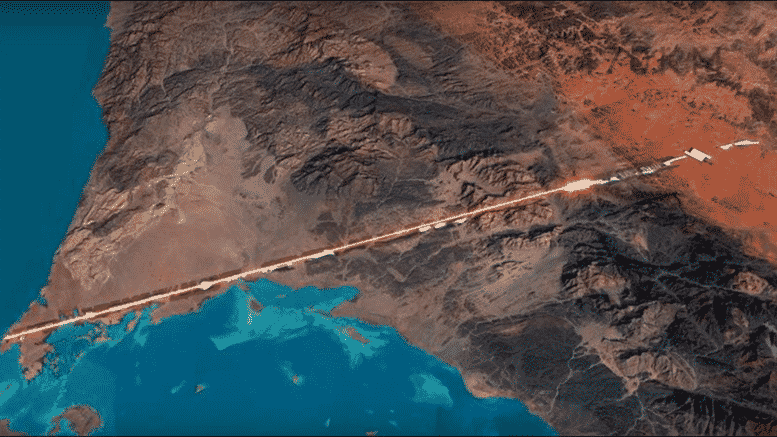 Please Share This Story!
PDF 📄
Saudi Arabia envisions building futuristic cities in the desert that are reminiscent of Technocracy’s Technates in the 1930s, that is, fully engineered cities designed to control the people who live in them. “The Line” is the latest announcement and has to be seen to be believed. ⁃ TN Editor

To the rest of the world, Saudi Arabia may look like a quasi-medieval kingdom where women still struggle for basic rights, where bearded clerics run the courts and where convicts are routinely beheaded by sword in public. But the Saudi monarchy — like its neighbors in Dubai and Abu Dhabi — has long cherished dreams of leapfrogging into a high-tech future. The last Saudi king created plans for six new cities in the desert, all billed as transformative steps toward a world beyond oil.

Now the Saudis have announced a fantasy that makes all their previous efforts look tame. Crown Prince Mohammed bin Salman, the de facto ruler, released a short film in January outlining his plans for the Line, a postmodern ecotopia to be built on the kingdom’s northwest coast. It will be a narrow urban strip 106 miles long with no roads, no cars and no pollution. M.B.S., as the crown prince is known, plans to pour $500 billion into the Line and related projects, which is a lot of money even by Saudi standards. He calls the Line a “civilizational revolution” to be inhabited by one million people “from all over the world.” Why anyone would want to move there, and why a city should be shaped like a strand of capellini, is anyone’s guess.

To watch the crown prince’s promotional video is to be immersed in a distinctively Saudi form of arrogance, blending religious triumphalism and royal grandiosity. The film begins with a fast-moving montage of the 20th-century’s greatest scientific and technical breakthroughs, including an incongruous image of Saudi Arabia’s founding king — as if he’d been a Steve Jobs-style innovator rather than a camel​-riding desert warrior. Dates flash on the screen in a vintage font as we see images of the first commercial radio broadcast (1920), the first color TVs (1953), the first successful kidney transplant (1954), the first man on the moon (1969), the birth of the internet. After flicking past the glories of YouTube and virtual reality, the screen goes blank and the words appear, white on a black background: “What’s next?”

Cut to M.B.S. on a stage in his floor-length white gown. He delivers a brief TED-style talk, while behind him we see a topographic model of what looks like blackened lunar crust. A thin stream of glowing green fire cuts through it, and for a moment I almost expected Godzilla to appear and do battle with the prince. The Japanese film monster, born of post-World War II fear and excitement about the power of technology, would be oddly appropriate here. But no: That green beam is meant to represent the Line.

As M.B.S. conjures this brave new world — no journey will take more than 20 minutes! zero carbon emissions! — you get the sense that his chutzpah is nothing short of metaphysical. He appears to believe that nature itself is at his command. This shouldn’t be entirely surprising, because M.B.S. has been promoting equally outlandish ideas since 2017, when he first introduced Neom, the broader futurist development of which the Line forms a part. (The name is a portmanteau of Greek and Arabic words for “new” and “future.”) The Neom prospectus described “a new way of life from birth to death reaching genetic mutations to increase human strength and I.Q.,” according to a 2019 article in The Wall Street Journal. Cloud-seeding would bring rain to the desert. The project includes serious, realistic planning on desalination, alternative energy and desert agriculture, I was told by Ali Shihabi, a member of the Neom advisory board. But those ideas were overshadowed by wild-eyed talk of super-high-speed trains, robotic maids and beaches with glowing sand.

The hubris underlying these proposals, nourished by generations of yes men (including well-paid Western consultants), will be familiar to anyone who has spent time in Saudi Arabia. Still, you might have expected a bit more circumspection from M.B.S., at least right now. This is the man who stands accused of ordering the gruesome murder of Jamal Khashoggi, the Saudi journalist who was lured to the Saudi Consulate in Istanbul in 2018, then strangled and dismembered with a bone saw by a team sent from Riyadh. Khashoggi dared to write mildly critical columns in The Washington Post. The details of his brutal killing shocked the world and made M.B.S. a pariah. He has condemned the murder and denies any role in it. (The C.I.A. begs to differ.)

Humility is not in M.B.S.’s genes, for better and worse. He continues to harass and jail his critics as if the Khashoggi murder never came to light. But his brashness has allowed him to hem in Saudi Arabia’s religious establishment, putting an end to the kingdom’s longtime promotion of poisonous Islamist doctrine. He is relaxing the rigid constraints on cultural life, and that has made him immensely popular, especially among the young.

Muhammad Bin Salman, the crown prince of Saudi Arabia, has announced plans to build a car-less, zero-carbon city with 1 million inhabitants and no roads, laid out as a 170km-long belt with services and transport infrastructure built underground.

Called “The Line”, the idea is part of Neom, the futuristic economic zone earmarked for the country’s northwest, on the coasts of the Red Sea and Gulf of Aqaba. According to the Saudi Press Agency, the city will be “built around nature” as “a response to some of the most pressing challenges facing humanity today, such as legacy infrastructure, pollution, traffic and human congestion”. 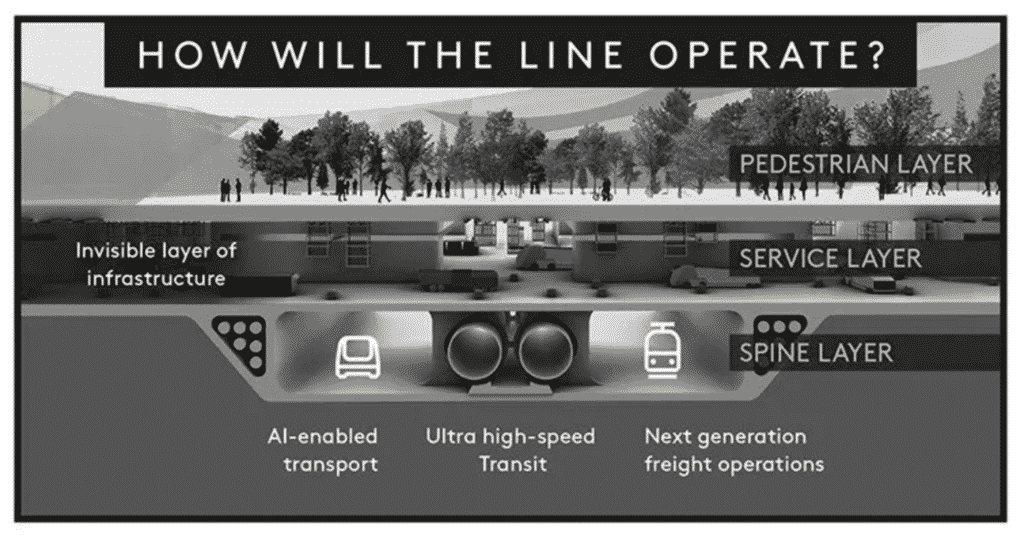 The absence of roads, and vehicles, will not inconvenience the city’s inhabitants since “all essential daily services, such as schools, medical clinics, leisure facilities and well as green spaces will be located within a five-minute walk”. A graphic produced by Neom, the company that Salman chairs, shows trains and autonomous freight vehicles running in “an invisible layer of infrastructure” beneath the city.

For longer distance travel, inhabitants will have access to “ultra-high-speed transit and autonomous mobility solutions” with “no journey longer than 20 minutes”.

The city, which is being badged as part of the kingdom Vision 2030 strategic plan, will be run by artificial intelligence, enhanced by machine learning and 5G systems, that “predicts ways to make life easier” – for example, but subcontracting service and maintenance work to robot maids and gardeners.

Energy will come entirely from renewable sources and its physical infrastructure will be built “around nature, instead of over it”, which means in practice that 95% of what was there before the city is built will still be there after work is completed.

Are they building it in Yeman?