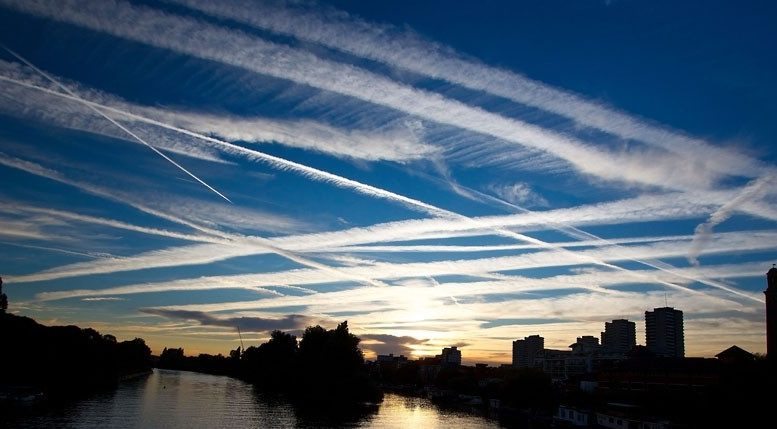 Please Share This Story!
PDF 📄
For all those who suffered abuse, ridicule and shaming for blowing the whistle on “chemtrails” in years past, or the spraying of sun-reflecting materials into the atmosphere, you are now officially vindicated as the entire program is out in the open for all to see and it is rapidly gaining global support.

The New York Times titled this article, As Climate Disasters Pile Up, a Radical Proposal Gains Traction. It states that “One way to cool the earth is by injecting aerosols into the upper layer of the atmosphere, where those particles reflect sunlight away from the earth.”⁃ TN Editor

The idea of modifying Earth’s atmosphere to cool the planet, once seen as too risky to seriously consider, is attracting new money and attention.

As the effects of climate change become more devastating, prominent research institutions and government agencies are focusing new money and attention on an idea once dismissed as science fiction: Artificially cooling the planet, in the hopes of buying humanity more time to cut greenhouse gas emissions.

That strategy, called solar climate intervention or solar geoengineering, entails reflecting more of the sun’s energy back into space — abruptly reducing global temperatures in a way that mimics the effects of ash clouds spewed by volcanic eruptions. The idea has been derided as a dangerous and illusory fix, one that would encourage people to keep burning fossil fuels while exposing the planet to unexpected and potentially menacing side effects.

But as global warming continues, producing more destructive hurricanes, wildfires, floods and other disasters, some researchers and policy experts say that concerns about geoengineering should be outweighed by the imperative to better understand it, in case the consequences of climate change become so dire that the world can’t wait for better solutions.

“We’re facing an existential threat, and we need to look at all the options,” said Michael Gerrard, director of the Sabin Center for Climate Change Law at the Columbia Law School and editor of a book on the technology and its legal implications. “I liken geoengineering to chemotherapy for the planet: If all else is failing, you try it.”

On Wednesday, a nonprofit organization called SilverLining announced $3 million in research grants to Cornell University, the University of Washington, Rutgers University, the National Center for Atmospheric Research and others. The work will focus on practical questions, such as how high in the atmosphere to inject sunlight-reflecting aerosols, how to shoot the right size particles into clouds to make them brighter, and the effect on the world’s food supply.

Kelly Wanser, SilverLining’s executive director, said the world is running out of time, and protecting people requires trying to understand the consequences of climate intervention. She said the goal of the work, called the Safe Climate Research Initiative, was “to try to bring the highest-caliber people to look at these questions.”

The research announced Wednesday adds to a growing body of work already underway. In December, Congress gave the National Oceanic and Atmospheric Administration $4 million to research the technology. NOAA will also start gathering data that will let it detect whether other countries start using geoengineering secretly. And Australia is funding experiments to determine whether and how the technology can save the Great Barrier Reef.

“Decarbonizing is necessary but going to take 20 years or more,” Chris Sacca, co-founder of Lowercarbon Capital, an investment group that is one of SilverLining’s funders, said in a statement. “If we don’t explore climate interventions like sunlight reflection now, we are surrendering countless lives, species, and ecosystems to heat.”

One way to cool the earth is by injecting aerosols into the upper layer of the atmosphere, where those particles reflect sunlight away from the earth. That process works, according to Douglas MacMartin, a researcher in mechanical and aerospace engineering at Cornell University whose team received funding. “We know with 100 percent certainty that we can cool the planet,” Dr. MacMartin said in an interview.

Wow! Thank you for that article, Mr. Wood! I’ve read that they’ve been spraying chemtrails for many years, and I know there was a time, when I was younger, and wasn’t “awake” enough, to know when they actually started spraying, but since the day I DID understand what was happening, I can say it has been happening for quite a number of years now. And since then, there’s been more than enough evidence of it, online, with the documents, and the videos, and the many people, who are and have been warning us about it. When you look and read… Read more »

by Victor
Reply to  joanofark06

You are so right Joan, And if they want the weather to calm down why don’t they blow the HAARP system to hell! Its all a plan as was/is the COVID!! OOPS i mean CERTIFICATE OF VACCINE ID, Before they blow up the HAARP take Bill Gates and FUC-CI AND CHAIN THEM TO A POST IN THE MIDDLE,,

Hello, Geoengineering has been going on for well over 50 years. Weather is constantly being manipulated by the HAARP complex just outside of Gakona, Alaska and has been done for many decades and the geoengineering is apart of that. Other countries have been doing the same. Russia has this technology and I heard that China is jumping in to build their infrastructure to control weather also. Search “HAARP Gakona Alaska” Stop the Crime website has almost any topic and more that you can think of. http://stopthecrime.net/wp/2018/11/02/original-home-page/ Document “Silent Weapons for Quit Wars” This document is the doctrine adopted by the… Read more »

I thought that climate change was a hoax thought up by the NWO crowd?

It is a hoax thought up by the NWO crowd? Why would this article make you think differently? Now the same crowd wants to alter the atmosphere by spraying chemicals into it.

They’re actually creating climate change with chemtrails and other technologies and now saying the problem will be the cure, no need to hide it as they ramp it up. Interesting planes deliver the particulates, thought planes are a big co2 contributor. Anyone who has studied chemtrails know they severely reduce relative humidity, the west coast forests are tinder boxes from it, and actually bring temperatures higher so they’re whole premise is off. We are also heading into a major grand solar minimum which will be cooling our planet plenty, dire really but will make it look like their ding dong… Read more »

“Vindicated” the “program” is “out in the open”??? What a bizarre conclusion to reach! They’re talking about laying the groundwork for starting the program in the future. That’s what the NYT story is quite specifically about. Geo-engineering is not a secret, is not new, and its use is not news, unless you have lived in isolation for the last 100 or more years. There is no real, definitive, undeniable proof of “chemtrails” It simply does not exist. NOW it WILL exist, but as the story specifically states, they will NOT being spraying “chems” but rather harmless particles. In the past,… Read more »

Look up, ya silly noot. 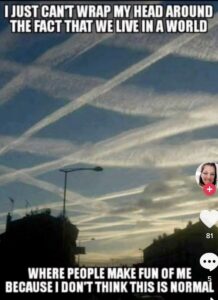 Who has given these people permission and the right to do this to our earth and her surroundings??

These so called Chemtrails are properly termed Air Pharmacology. The Earth is being treated much like a human cell and the methods there to take CO-2 wastes emissions from cells and change them into a special calcium bicarbonate. That Bicarbonate is then hygroscopic and then pulls low deuterium water in the jet plume exhaust into seeded water aerosols large enough for Mie Scattering to cool the planet around 3% via reflecting the Sun’s IR heating at 30-40 k feet in altitude. The in situ process in the jet emission only happen in the very thin air at 30-40 feet and… Read more »

what are your thoughts on weather modification in the current era? The airplane clouds I witness do seem to have a great effect on weather, whenever these clouds are present relative humidity plummets and precipitation is usually diminished. Happened just this past weekend in Southern California, a low pressure system neutered and turned hot coming off the pacific in late October. Can’t tell you how many of these I’ve seen over the years. Also the owning the weather by 2025 paper mentions artificial clouds for weather modification. Was the additions to jp8 made in the mid 90’s? Thanks.

so let me get this straight they’re trying the nonsensical approach to renewable energies including solar, and now they’re trying to deflect that away from the Earth. what a bunch of morons first the crap don’t make sense with all the energy BS, now the idiots are trying to basically knock down the energy sector by talking about trying to reflect the energy away from this Earth. all over a natural occurring phenomenon known as climate change that’s going to happen no matter what we do. don’t know why they’re trying to fight it because nothing we’re doing on this… Read more »