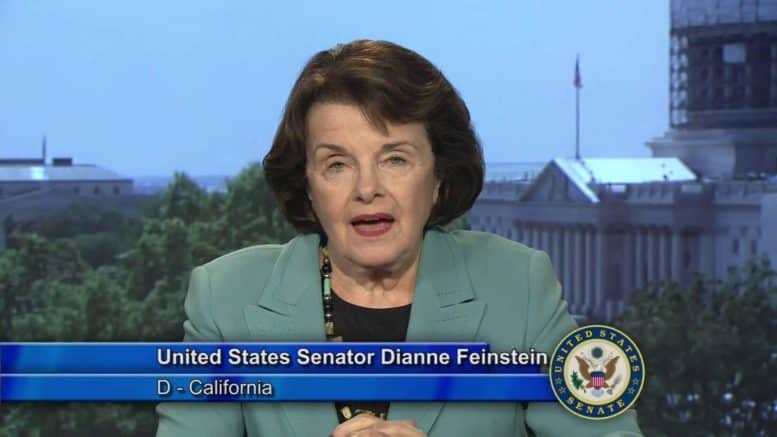 Please Share This Story!
PDF 📄
Sen. Diane Feinstein (D-CA) was a long-time member of the Trilateral Commission and a consummate insider and globalist. Zbigniew Brzezinski, co-founder of the Commission with David Rockefeller, was responsible for bringing China back to the world stage in 1976, and then rebuilding it into the Technocracy that it is today. Her husband has become fabulously wealthy because of these connections. Could Feinstein be ignorant of this? Not a chance. Because this backstory is not widely known, radio commentators like Mark Levin totally miss the seriousness of the situation.  ⁃ TN Editor

New details emerged Wednesday about how a molefor the government of communist China managed to stay by Senator Dianne Feinstein’s side for nearly 20 years.

It happened five years ago, but additional information is just surfacing about how the Bay Area senator’s office was infiltrated by a Chinese spy.

The Bay Area is a hotbed for Russian and Chinese espionage. Late last year, the feds shut down the Russian consulate in San Francisco.

You may remember the thick black smoke that billowing from building before Russian diplomats turned it over to authorities, presumably produced by burning documents.

Now, all eyes are on Chinese intelligence in the Bay Area after the website Politico reported last week that a staffer for Senator Feinstein turned out to be a Chinese spy who reported back to the government officials about local politics.

On Wednesday, the San Francisco Chronicle uncovered additional details in a column written by reporters Phil Matier and Andy Ross.

The column revealed that the Chinese spy was Feinstein’s driver who also served as a gofer in her Bay Area office and was a liaison to the Asian-American community.

He even attended Chinese consulate functions for the senator.

Feinstein — who was Chair of the Senate Intelligence Committee at the time — was reportedly mortified when the FBI told her she’d be infiltrated.

Investigators reportedly concluded the driver hadn’t leaked anything of substance and Feinstein forced him to retire.

“Think about Diane Feinstein and what she had access to,” said Harp. “One, she had access to the Chinese community here in San Francisco; great amount of political influence. Two, correct me if I’m wrong, Dianne Feinstein still has very close ties to the intelligence committees there in Washington, D.C.”

Harp ran counter espionage for the FBI in the Bay Area. He said in addition to traditional political intel and diplomatic secrets, Bay Area spies are often focused on things like R&D, technology and trade secrets.

“They also have an interest in the economy here. How to get political influence here,” said Harp. “What’s being developed in Silicon Valley that has dual-use technology. All of that is tied to the Bay Area.”