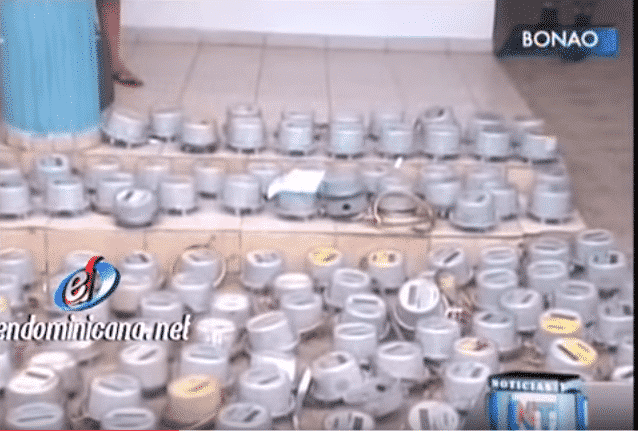 Last week, hundreds of Edenorte customers in the Dominican Republic removed so-called ‘smart’ meters from their homes and businesses.

Watch the action here on Facebook(with over 1.3 million views!), or on Youtube below:

The title of the video loosely translates to: “Take off your meters and bring it to EDENORTE in Piedra Blanca.”

While ‘smart’ meters facilitate unlawful surveillance, cause fires and emit strong pulsed microwave radiation, it appears that these organized customers were most irate about the unjustifiable increases in their utility bills.

We commend Dominicans for such unified, inspiring action, and we commend their military and police for doing the right thing and supporting the people.

“Hundreds of meters were removed and put in front of the electricity company offices of the north (in the city of Peidro Blanca, Provinice of Monseñor Nouel).”

“The reason was high rates combined with frequent electrical outages in the region. The outages became prolonged and the electricity bills arrived at nearly double that of the month before.”

One guy (in pink t-shirt) holds up a meter and asks how it is possible in X days for it to register 1041 Kilowatts. And he says, “this is why we say that they have rigged these meters to benefit them.”

“The residents say that the lower their consumption, the higher the bills.”

“Since yesterday, residents from numerous barrios had gone out in the streets to protest this.”

The electric company (Edenorte) has changed all of the meters to “smart” digital meters. They began that process a year ago, and so throughout the city we all have these meters which the electricity company says are a “more accurate” reading of the usage of every home.

A commenter below notes: The electricity was being cut off out of nowhere and they would have no power for a couple of hours every day, sometimes more.

They are also saying that the electric bills are coming in double for the same usage as last year, and that is true.

The bills came this month, and the video is an example of public outrage.

They’re turning over the trucks of the electric company, slashing the tires, and braking the windows – but other than that it’s just a normal calm beautiful day here.

I had our Smart Meter removed from our rental house a couple of years ago. I told them that their meter’s transmitting interfered with my “licensed equipment”. Since smart meters are using unlicensed bands, they are required by law to cease transmitting if it interferes with licensed bands (same as any other Part 15 transmitters, the smart meters use Part 15 and Part 19 both unlicensed) our service was through “Salt River Project” aka SRP in Arizona. A man came out the next day? or day after, to remove it. There was no trouble and they apologized for the trouble.… Read more »