With vaccination deadlines fast approaching, hundreds of thousands of US service members remain either unvaccinated or partially vaccinated against Covid-19, according to the Washington Post.

The Navy has been most compliant with President Biden’s July edict that the nation’s 2.1 million troops take the jab. According to the report, 98% of active duty seamen have gotten at least one shot, while 90% are fully vaccinated. That’s in stark contrast to the Marines, where just 72% are fully vaccinated. Meanwhile, over 60,000 Air Force personnel have just three weeks to meet the DoD’s Nov. 2 deadline.

Among the Army Guard and Reserve – which have until June 2022 to come into compliance, under 40% are fully vaccinated. 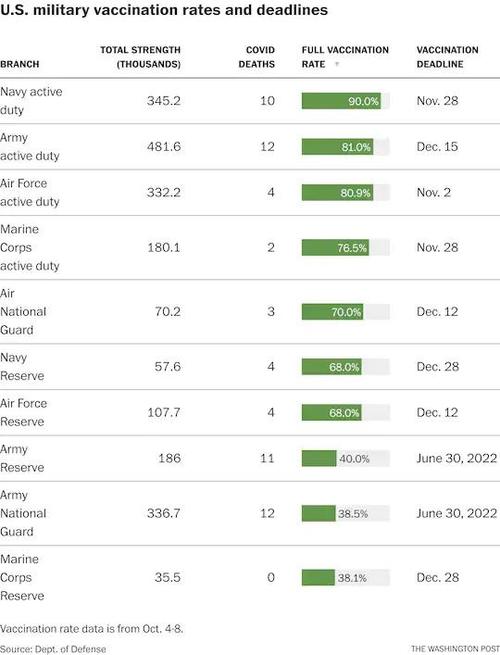 Scattered throughout the WaPo report are various mentions of Covid deaths throughout all branches of the armed services – which they claim are ‘soaring’ right now. Throughout the pandemic there have been 62 Covid-linked deaths out of 2.1 million troops, or 4.7 botched Afghanistan pullouts. 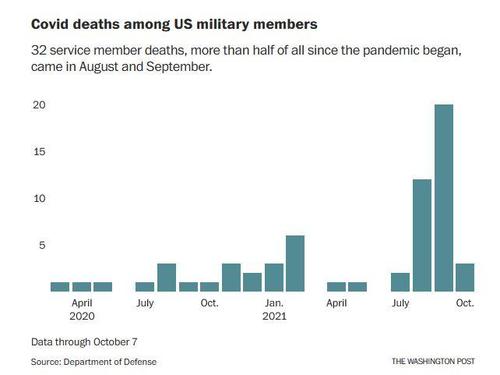 The military is balancing Biden’s edict with historical pushback to mandatory vaccines – stemming in part from a backfired Anthrax vaccine regimen in the late 1990s.

The mandate “adversely” affected the “retention of trained and experienced guard and reserve pilots,” according to a Government Accountability Office sample survey cited in a 2002 report. About 16 percent of pilots and crew members in reserve units either sought a transfer to another unit to delay or avoid the process, switched to an inactive status or left duty altogether, the report found.

“The Army probably does not want to risk those retention problems,” Brahmbhatt said. -WaPo

The sheeple are doing all the Piper’s work. Bobby Marley was always wrong.
“If you can fool some people some times, you can fool all people all times”…………LOL.

I pray everyone stands their ground! There is power in numbers!! I know many people here where I live who are standing their ground even amongst powerful opposition from the many vaccine takers prophesying “you will die if you don’t” as little prophets and obedient sheep. It reminds me of drug pushers who push drugs on the street, the peer pressure to take the drugs even in schools is immense, just look at the streets of the many drug addicted` homeless, helpless souls. THAT IS EXACTLY WHAT IT IS LIKE!

Well, at least you know that if you take the shot you are more likely to die/be injured. So, nuf said. The people taking it will be likely be dead or seriously injured by next year. It appears from the data that at 4 to 6 months the weak are winnowed. People seeking a booster will die sooner. Apparently, the 2nd shot is the kill shot for most.

Good for them, I hope they continue to fight back against this hyped “disease”. People are finally starting to catch on. This was a political maneuver. It helps the gubmint gauge how many morons there are who will believe absolutely anything they say.

Can’t be much of a Pandemic if they can push “deadlines” out into 2022? Oh, wait…that’s because it’s not! Nothing but a bunch of ongoing lawless gobbledygook!

Say No. Pray for courage & guidance & stand firm! Unless you want to risk potential parasites and God knows what else coursing through your blood.

In a word……AWESOME!!! There’s going to be SO MANY HUMANS, once the Brain-dead-Zombies die off, to fight these Criminal Globalists…….WE WIN! We’re ALREADY WINNING!!

Any reactions or maybe even crippling/deaths need to be known.
That’s OUR Military. And those are OUR best.

The Navy is vaxed to the max because they can’t get away. Most all are stuck on ships.

I’m not clear how it’s staggering unvaxxed numbers? Navy is claiming 90% and Army 80% FULLY vaxxed? Maybe it’s staggering that TRUE patriots don’t want to serve traitors and globalists trying to destroy everything this country stands for?

Is is true unvaxxed are ineligible for the draft? Now the swamp is legislating women to register for the SS system just like their master Israel. Advice is STAY THE COURSE and don’t take the Mark of the Beast – your immortal soul isn’t worth it!