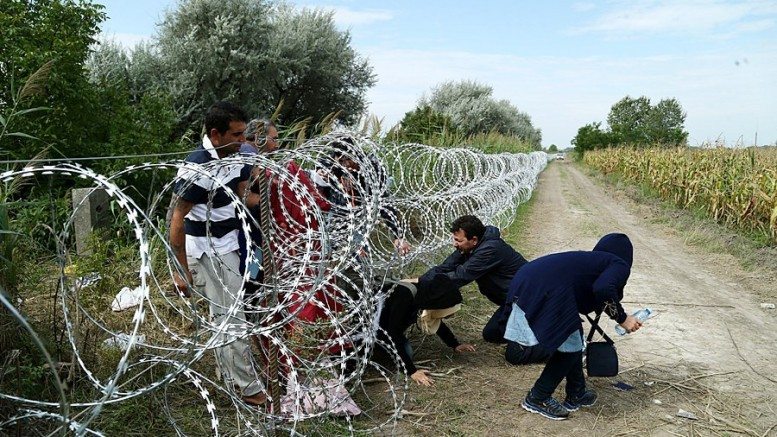 Depending on where you live and how sensitive you are to the global mass-immigration crisis, your reaction to it will be somewhere between head-scratching and shell-shocked incredulity. The purpose of this report is to give you some concrete evidence about where these policies originated and to what ends they were created.

A major player is Peter Sutherland, who in past years has served as the Director-General of the World Trade Organization, as Chairman of Goldman Sachs International, as EU Commissioner, as Chairman of BP and Chair of London School of Economics Council, among other things. Most importantly, however, he is the European Honorary Chairman of the elitist Trilateral Commission.

His relevance to this article is that in 2006 he was appointed by the United Nations’ to be the Special Representative of the Secretary-General for International Migration.

Needless to say, whatever comes out of Sutherland’s mouth is certifiably representative of official policy of the Trilateral Commission and the global elite at large. In fact, he is one of the most respected policy-makers in the world, and many consider him to be the “father of globalization”.

The migration crisis in Europe came to global attention in the fall of 2015. Headlines like these were seen in the European press:

Sweden first opened its doors to Muslim immigrants in the 1970s. The trickle of migration was slow at first, but increased over the decades as turmoil in the Mideast produced more refugees. Today, Sweden’s culture is as much Islamic as it is Swedish. Muslims have steadfastly refused to assimilate into Swedish culture, and now the nation is paying a high social price for their naitivivity: It has become the rape and gang-rape capital of the West.

In spite of the European crisis, Sutherland wrote in late 2015,

Since his 2006 appointment to the UN, Sutherland has stumped this message across Europe with great fanfare. With the combined weight of the UN behind him, governments were persuaded to further open their borders to immigration. A growing multi-cultural society, he claimed, was the only pathway to Sustainable Development.

Sutherland is the leading apologist for Federalism in Europe; that is, dissolving national borders completely and simply merging all cultures into one big happy family. The obvious shortcomings of these policies have not deterred Sutherland – or the UN – from stating that more migration, not less, is the answer to the current crisis.

At the peak of the migration crisis in November 2015, and just after the horrific Paris terrorist attacks, the headline appeared, UN warns Europe against ‘backtracking’ on migrant commitments. Really? The article scolded European leaders:

“The United Nations on Tuesday urged states not to “backtrack” on pledges made to host migrants and refugees, including from Syria, in the wake of the attacks in Paris. Multiple UN agencies issued a warning to European leaders who might use the tragedy to advance anti-migrant policies..

A spokesman for the UN rights agency, Rupert Colville, described calls for a crackdown on migrants as “very, very stupid.”

“It’s really pretty disgusting how extreme anti-immigrant politicians and media commentators have jumped on this attack to push their existing agendas. That is really pretty obscene actually, given what happened in Paris,” Colville told reporters.

It is not surprising that migration is now included as an official part of the UN’s 2030 Agenda that created the 17 Sustainable Development Goals (SDGs) in November 2015. Sutherland addressed this in his report, Migration Is Development: How Migration Matters to the Post-2015 Debate:

“The post-2015 debate so far has underlined the need to strengthen global partnerships, and, in light of the evidence highlighted above, human mobility has been mentioned in the same context as trade, transfer of technology, and other developmental forces.” [emphasis added]

Goal 10.7 of the SDGs reflects this to “Facilitate orderly, safe, regular and responsible migration and mobility of people, including through the implementation of planned and well-managed migration policies.”

In Migration is Development, Sutherland wrote,

“…there is no greater symbol of the world’s growing interdependence than the movement of people. If we can make meaningful economic progress in the coming generations, one of the pivotal reasons will be that people are allowed to move more freely. Advanced countries, with their adverse demographic trends, need migrants, as do developing countries ― not only for migrants’ economic contributions, but also for the social and cultural diversity that they bring.” [emphasis added]

Sutherland’s use of the word “interdependence” will be remembered by early students of Trilateral Commission literature from 1973 onward. While the Commission may not have invented this word, they certainly popularized it in the context of globalization. However, there was never any demand or need for interdependence among nations, but Commission doctrine insisted that it was a given fact of life and that nations were going to necessarily meld together.

In summary, this is where modern migration policies have come from. Open borders and unlimited mobility of foreigners are in. Immigration restrictions of any sort are out.

By now, you should not be surprised to realize that the policies seen in Europe are identical to those seen in the United States, especially with respect to the border with Mexico.  Even when Congress has legislated wall-building and approved funding, the Executive Branch of government has flatly refused to comply, and we are left with an open-sieve border that has allowed millions of undocumented persons to enter. Such has not been a partisan issue, because Republicans have been just as complicit as Democrats in shunning border controls.

Sutherland and his fellow Trilateral Commission cronies in Europe were primarily responsible for the creation and advancement of the European Union system of governance. The Commission has exerted a similar hegemony in the United States since the election of Jimmy Carter and Walter Mondale in 1975, both of whom were Trilaterals.

For further information, please read Technocracy Rising: The Trojan Horse of Global Transformation, where I have thoroughly documented the unmistakable connections between the Trilateral Commission and the UN’s Agenda 21/Sustainable Development, as well as its connections to Technocracy.

The New World Order was on track before the Trilateral Commission was formed. The Council on Foreign Relations got this rolling decades before TL. Sadly only one person in fifty thousand might be interested in how the NWO really works. Now we now why the fraud GOP has given BO everything he wants. No one dare mention any of this on the lying main stream state run media and sadly even Fox News

True sustainability would mean that a population does not erode it’s land base. In a globalized world, all rural areas simply become the extraction base for city people, who are disconnected from stewardship. Thus, in a globalized world, there are no stewards, there are just supply chains and markets and consumers. With a population of non-producers, extraction can only be run by computers because local stewardship has morphed to urban “freedom.” “Freedom” means not being responsible. Since local diverse cultures are outside the computer model, they are obstacles to efficiency. In fact, this exactly is why Facebook is sending wireless… Read more »

Sutherland’s desire to control migration patterns of people reminds me of the Fish and Game controlling elk herds. I think that’s the way they see us.

Thanks for this article Patrick. Of note, United Nations is creating a New Urban Agenda called Habitat lll in October 2016. The related Jakarta Declaration for the Asia-Pacific National Government states that (inter alia) “we emphasize the importance of the intergovernmental cooperation on incoming migration and displacement TO URBAN AREAS”. See page 4 – https://www.habitat3.org/bitcache/71fe7c2733dbd173cdcc6d8089f410c0330d2b49?vid=561841&disposition=inline&op=view At the citiscope website (http://citiscope.org/habitatIII/explainer/2015/06/who-are-habitat-iii-major-players) supported by the Rockefeller Foundation, Habitat lll is all about globally developing our cities and human settlements. Step back to 30 Sept. 2015 at United Nations Headquarters New York, when Victoria, an Australian State (now coined ‘a state of cities’)… Read more »

I am appalled at the thinking shown in this article. I didn’t realize that we were this close to 1984, and am very concerned.