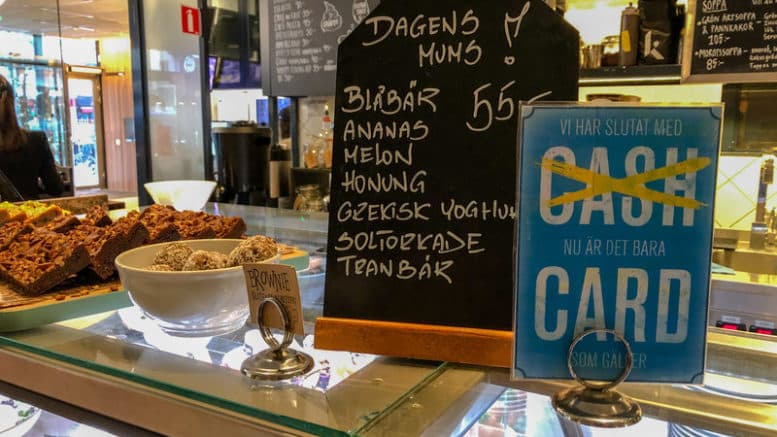 Please Share This Story!
PDF 📄
Technocrats pushing for a cashless society are seriously conflicted as its flagship experiment in Sweden is coming unravelled. The people in Sweden have spoken, and cash stays. ⁃ TN Editor

Sweden will likely push through a proposal to force banks to keep offering cash to customers who require it as the Nordic nation grapples with how to balance the rapid transformation into a cashless society.

Key lawmakers said in interviews over the weekend that the government will probably seek to enact proposed legislation that had been roundly criticized by the banking industry and called potentially illegal.

“There may be some changes, but mainly, what we proposed will be carried out,” said Fredrik Olovsson, a key lawmaker for the ruling Social Democrats. “There’s a broad majority for this, so I expect it will happen.”

Olovsson is part of a committee that’s reviewing the central bank law, which proposed last year to make it mandatory for banks that provide checking accounts and have more than 70 billion kronor ($7.6 billion) in deposits from the Swedish public to offer cash withdrawals and handle daily receipts.

The legislation is a response to Sweden becoming one of the most cashless societies in the world, with bank branches not offering money withdrawals and stores not accepting cash. Some people are finding it difficult to cope without access to mobile phones or bank cards. There are also fears around what would happen if the digital payments systems suddenly crashed.

But the Swedish Bankers’ Association has said that the plan to make just a few banks responsible for providing cash could be in breach of European Union rules. The competition authority and financial watchdog have also come out against the proposal, arguing, respectively, that it would distort competition since it only affects some banks and that securing access to cash should be a responsibility of the state.