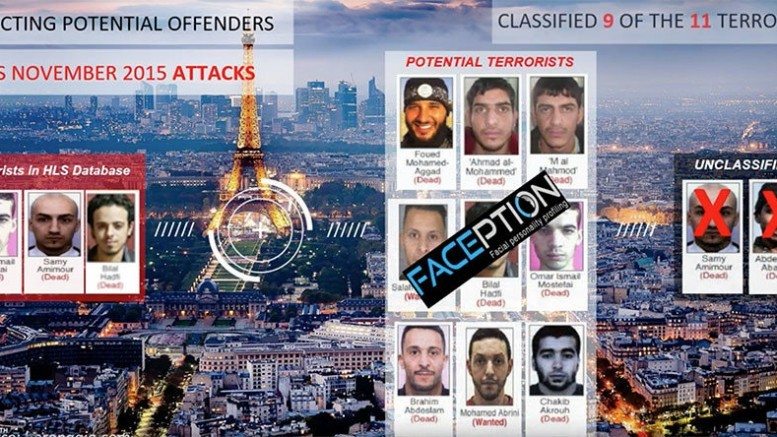 TN Note: Critics are already wondering if this is a rebirth of the long-debunked practice of phrenology, which believed that personality traits could be determined by measurements of the skull. It was used to justify racism and naturally found its way into Nazi Germany. This is very dangerous precedent that could lead to massive abuse of power. Homeland Security has already signed a contract with the maker.
Israeli start-up Faception is claiming it can spot terrorists by simply analyzing their faces and says it is working with “a leading Homeland Security Agency” to identify potential threats.

The company, founded in 2014, uses “computer vision and machine learning technology” to profile people from just a facial image and says it can reveal a range of personality traits and types.

So far it has built 15 different classifiers, including extrovert, genius, academic researcher, professional poker players, bingo player, brand promoter, white collar offender, paedophile and terrorist. However Faception notes on its website that this is customizable and a relevant classifier could be built if the desired behaviour originates from a person’s DNA.

DNA is the key, according to company CEO Shai Gilboa. “Our personality is determined by our DNA and reflected in our face. It’s a kind of signal,” he told The Washington Post.

The company also relies on ‘social and life science research’ to back up its considerable claim, citing research from Edinburgh University exploring the impact genetics has on personality traits by studying identical and non-identical twins

Homeland security and public safety are the primary focus of Faception, although the technology is also applicable to financial services, marketing and artificial intelligence.

A marketing pitch video explains that the technology goes beyond facial recognition and can predict terrorists. It references last year’s Paris attacks as an example of how the technology can work.

“Only three of the 11 terrorists had a previous record, our technology classified nine of those as potential terrorists with no prior knowledge, that’s why we’re working with the leading Homeland Security Agency,” the video claims.

It also noted its success at a poker tournament where two of the four players it predicted as the best out of 50 made it into the final. It compared the photos of the amateur players against a Faception database of professional poker players to get those results.

And the whole system is powered by the wired-up brains of three autistic kids reclining in a “milk bath.”