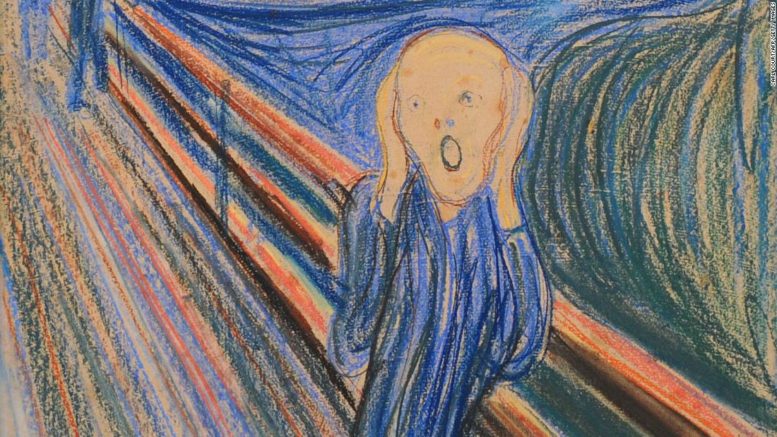 Please Share This Story!
PDF 📄
Early Technocrats who developed the “science of social engineering” studied the likes of Saint-Simon, Pavlov, B.F. Skinner, Edward Bernays, etc., and knew full well the effects of fear on people and societies. Today, it is their most useful tool.  ⁃ TN Editor

I’ve gone on for a long time about fear making humans stupid, and even about it being a weapon and a brain poison. But I’ve also wondered at times whether people would hit fear-fatigue… that point where people have simply had enough fear and walk out from under it.

As it turns out, however, I was a bit optimistic on fear fatigue. I’ve been reading Robert Sapolsky’s newest book, Behave: The Biology of Humans at Our Best And Worst, and was disappointed to learn what the best new research shows on the long-term application of fear. (Or, in the academic terminology, sustained stress.)

My disappointment, however, was soon tempered by two things:

This is more destructive than people realize.

What Perpetual Fear Does To Us

I’m going to quote from Sapolsky, who is one of the best neuroscientists of our time. I’ll edit a bit to simplify and to remove the brain-area references, and will follow the passages with a few elaborations.

“During sustained stress, we’re more fearful, our thinking is muddled, we assess risks poorly, and act impulsively out of habit, rather than incorporating new data.”

Under a long stream of fear (like scary headlines), our thinking breaks down. Let me put that very simply: You may be very bright in essence, but when you consume hours of fear every day, you become stupid. And please understand: This is biological. Your brain operations become those of a stupid person. (And yes, I’m using “stupid” very unscientifically.)

Also bear in mind that fear works. The people selling fear on TV, web pages and social media are being rewarded for it. They have become, using my terms loosely but not unfairly, drug dealers, selling damaging material that people become dependent upon. Moreover, these are professionals. Social media companies are fully aware that their business models depend upon people being addicted to them. They are careful to keep them addicted.

The fears people consume, then, are coming to them from people who are cashing in from it.

“Stress weakens connections that are essential for incorporating new information that should prompt shifting to a new strategy—while strengthening connections with habitual brain circuits.”

In other words, fear locks you into your habits and your previous choices. It literally diminishes the brain pathways that allow you to change your mind.

This is serious, and I suspect that you’ve seen examples of this already.

Again, prolonged fear locks people into whatever path they’re already on. And again, this is biological. The brain circuits are directly affected.

From everything I’ve written above (and there are other nasty effects like domestic violence), it would appear that we are doomed; that our neighbors who’ve drunk deep from the river of fear are brain-locked, and so long as the fear stream continues (there doesn’t seem to be an end in sight), they will get more and more rigid in their biases, and that violence will continue and increase.

And for some people all of the above will be true. Fear destroys in the most direct way: biologically.

Still… biology is never simple, and especially on the human level. While the things above are generally true, there are always exceptions; sometimes a lot of them. And it is those exceptions that have saved us, time after time.

The wages of perpetual fear are polarized and locked minds. And that leads to knee-jerk opposition, violence and murder. We’re seeing that now and we stand to see it for some time. The world, it seems, has become addicted to fear.

And yet, many of us refuse, and this is a long way from over.

There was a party in my neighborhood two days ago: Music, talking, playing, laughing and so on. It was the first joyful noise I’ve heard in public for a long time.

I suggest looking up :Russel-Jay: Gould.