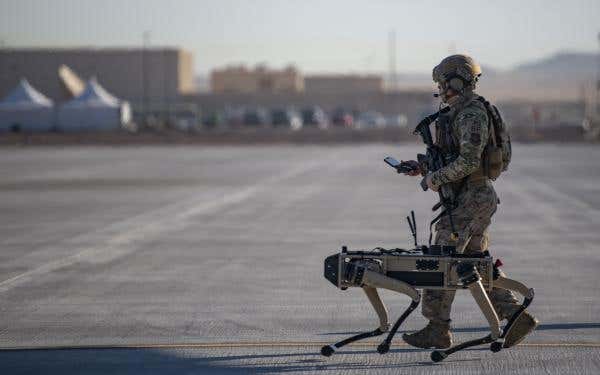 Posted By: Brent Tingley and Tyler Rogoway via The Drive September 9, 2020

Please Share This Story!
PDF 📄
Technocrats always have a better solution than human labor. In this case, future military operations will be conducted with robots, not humans. The Air Force will be a test ground for base security. ⁃ TN Editor

They look like they were cast straight from an episode of Black Mirror, and eventually, their mission could be similar in some ways, but for now, robot dogs are stretching their legs in the big test exercise environment for the United States Air Force.

Last week, the U.S. Air Force hosted the second demonstration of its new Advanced Battle Management System (ABMS), a digital battle network system designed to collect, process, and share data among U.S. and allied forces in real-time. The ABMS has already undergone several tests, including a live-fire exercise earlier this year conducted with data and communications provided, in part, by SpaceX Starlink satellites.

The highlight of last week’s demonstration was the use of multiple distributed sensors to detect and shoot down mock Russian cruise missiles. The system involves 5G and 4G networks, cloud computing systems, and AI systems to provide an unprecedented level of situational awareness and course of action decision making. ABMS is a top modernization priority for the Department of the Air Force, which is dedicated $3.3 billion over five years to develop and deploy the architecture and related systems. Senior Air Force leaders cite the system as one of the most pressing capabilities for success in several key theaters of operations.

This latest ABMS demonstration was described as being one of the largest joint experiments in recent history, involving 65 government teams from every service including the Coast Guard, 35 separate military platforms, and 70 different industry partners. The exercise spanned 30 different geographic locations and four national test ranges.

Dr. Will Roper, Assistant Secretary of the Air Force for acquisition, technology and logistics, said the demonstration was intended to test the ability of ABMS to collect and fuse data instantly across geographically-separated forces. “Future battlefields will be characterized by information saturation. One of the key objectives of this onramp was to present a dizzying array of information for participants to synthesize, just like they would see in a real operation,” Roper said in a USAF press release. “This compelled commanders and operators to trust data analytics and artificial intelligence to understand the battle. Valuing data as an essential warfighting resource, one no less vital than jet fuel or satellites, is the key to next-gen warfare.”

In addition to testing the data-gathering and sharing systems, the event also saw the Air Force using quadrupedal “dog” robots for perimeter defense at Nellis Air Force Base. The robots were built by Ghost Robotics and were intended to be a part of the ABMS test which took place earlier this year, but bandwidth issues prevented their use during that event.