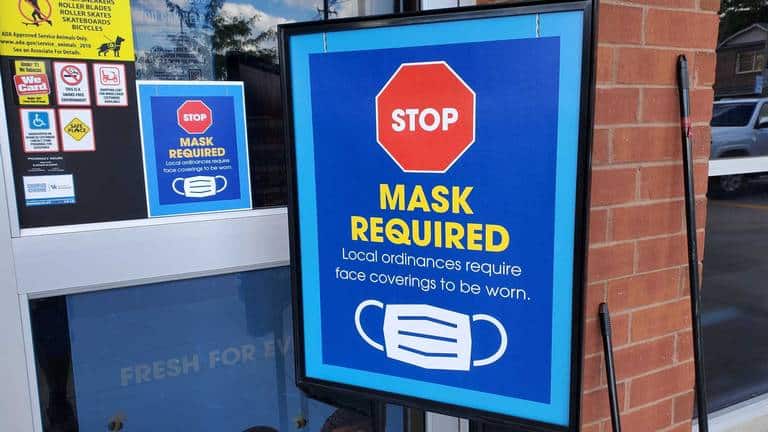 Please Share This Story!
PDF 📄
President Biden’s “100 Day Mask Challenge” Executive Order was signed on January 20, but it is not backed by any credible science. Rather, it is about continuing the psychological intimidation and control of  American citizens. ⁃ TN Editor

Last fall, the University of Washington’s Institute for Health Metrics Evaluation (IHME) published a headline-grabbing study with a politically appealing claim: if Americans would simply mask up when they ventured out into public, over 120,000 lives could be saved by the beginning of next year. As Joe Biden takes office later this week, he is widely expected to use executive orders to enact a 100-day long national mask mandate.

Biden’s action is directly premised on the claims of the IHME study, which he has repeatedly alluded to in his public commentary. But is the science behind this claim sound?

As I documented last fall, the IHME’s projections rested upon a simple data error. The IHME model begins from the assumption that only 49% of Americans were currently wearing masks in public. Increase the mask adoption rate to between 85% and 95%, it stands to reason, and you’ll save over a hundred thousand lives by reducing the spread of Covid-19. A national mask mandate, the authors implied, would do the trick.

The IHME’s projections had a crucial problem however. The IHME took its 49% adoption figure from a months-old outdated survey at the beginning of the pandemic. As of late September when they made their projections, US mask adoption hovered at 80% nationwide. Instead of nearly doubling mask use rates, a national mask mandate would only increase compliance by about 5 to 15 percentage points. The number of lives that the mandate would save, it turned out, had been vastly exaggerated in the published report.

The IHME’s director took exception to my criticism, though notably he did not dispute any of my math. “[Magness] is correct that our estimate of mask-wearing rates has increased” since the study’s publication, explained Christopher J.L. Murray in a letter to the Wall Street Journal. New data from the summer and early fall confirmed an increase in public mask adoption rates. Yet Murray continued: “[h]e is incorrect to suggest that this weakens the case for public policies that require masks.”

In the roughly two months since this public exchange, the IHME’s mask model has undergone a curious transformation. Murray and his team quietly updated their figures to reflect the higher and more realistic mask-adoption rates. Furthermore, they extended these corrections retroactively to their model’s projections from the summer months.

The chart below shows how the IHME mask model has shifted over time. The blue line depicts the actual US mask adoption rate, as tracked by the YouGov survey. It shows that US mask adoption rapidly increased in the spring until hitting about 80% in mid-July. From July until the present, it has held stable at the 80% level (parallel surveys by the CDC, Pew Charitable Trust, Carnegie Mellon University, and the Kaiser Family Foundation confirm these findings).

The orange line shows the IHME’s mask model and forecast on September 21, which is the version it published in the journal Nature-Medicine. The yellow line shows the IHME’s subsequent upward revisions as of January 2021, which are now finally starting to converge with reality. Their estimates still fall slightly short of what the aforementioned surveys show, but as of January 18th the IHME model assumes that 76% of Americans wear masks in public – just shy of the 80% level. 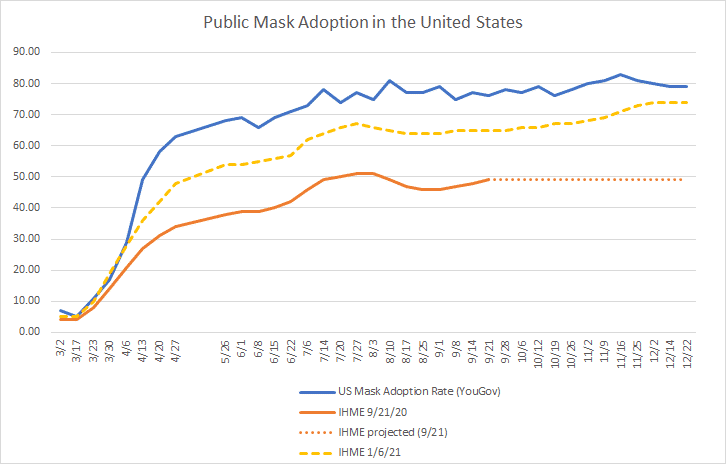 While the IHME team is to be commended for correcting their model to better reflect reality, these adjustments also mean that comparatively few additional gains remain to be had from bumping the mask-adoption rate upward to 85 or 95%. The most recent of the independent surveys – a study conducted by the Kaiser Family Foundation in December – even reports that 89% of Americans always or almost always wear masks in public, suggesting we are already at or near the targeted “universal adoption” threshold of the IHME model.

The ongoing corrections to the IHME model have severely dampened the promised benefits of a national mask mandate. The figure below shows the IHME’s “lives saved” forecast under universal mask adoption with 95% compliance, as projected for 4 months out from its release date. 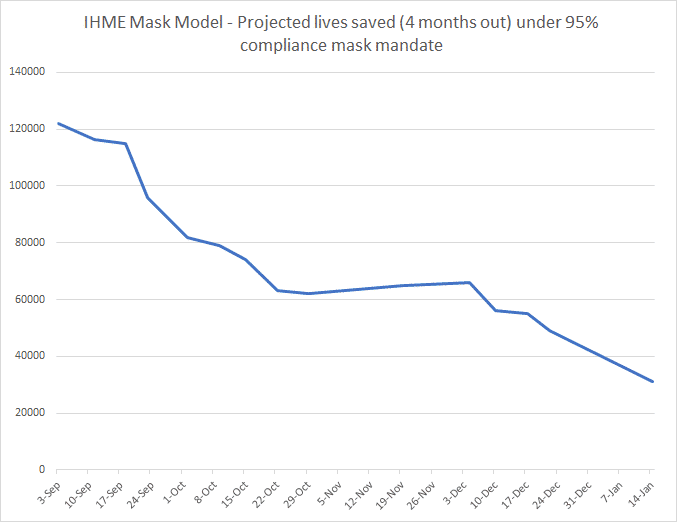 Back in September, the IHME model projected over 120,000 lives would be saved by January under a mask mandate. Now it projects a much smaller 31,000 lives saved by the end of April.

When reading these ever-shrinking projections, keep in mind that US mask adoption patterns have not meaningfully changed since the mid-summer of 2020, before the IHME even released its first “lives saved” estimate. It has stayed constant at roughly 80% throughout this entire time. The only apparent changes are the input data for the IHME model, which they updated in the wake of my critique to better approximate reality. The effect is to reduce the IHME’s “lives saved” projection at the 4-month mark to only one quarter of its headline-grabbing claim from back in the fall.

These changes do not mean that masks lack effectiveness at the margins. They remain a precautionary hygienic response – particularly in certain indoor venues and around vulnerable people. Rather, the IHME’s model adjustments confirm what several of us have been pointing out since the mask mandate movement began in earnest last year. The main gains from masking have already been reaped. Americans rapidly adopted them last summer and have continued to use them at consistently high rates ever since. Adding a new national mask mandate on top of this practice will bring little if any additional benefit to what voluntary adoption already achieved, though it may foster a false hope in the exaggerated claims of an obsolete and erroneous model.

Why do people still think that masks work, considering that Coronaviruses are so small they can go through any mask? Is it some psychological crutch or something? I don’t get it. I’ve tried to explain this to people, and it’s like they just draw a “blank” when I tell them.

I can relate to that! It’s like asking someone why they would vote for Biden! Lol….talk about a “blank” look! I would suggest though, to keep on trying to inform people, with showing them, physically, any evidence, as you can. If one person won’t listen, and you tried, move on….sooner or later, you’ll find someone who WILL have an “open mind”, and WILL listen. But like I said, show proof of what you say! Articles and the links, pictures, print outs, etc etc…anything you can think of, to push what you say…with facts, and evidence… Talking about a subject, is… Read more »