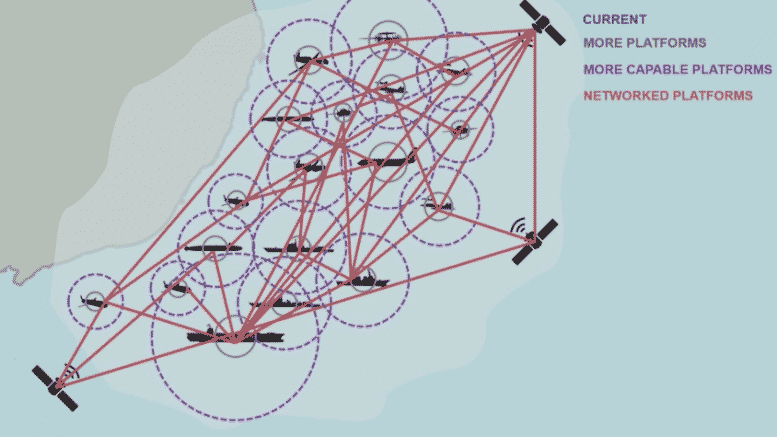 The global battlefield will radically change as the military connects every conceivable asset and enemy in the world. In other words, it will be a ‘giant, armed nervous system.’ This is the same Technocrat dream for society as a whole where everything is interconnected to mimic a human nervous system. ⁃ TN Editor

Leaders of the Air Force, Navy, Army and Marines are converging on a vision of the future military: connecting every asset on the global battlefield.

That means everything from F-35 jets overhead to the destroyers on the sea to the armor of the tanks crawling over the land to the multiplying devices in every troops’ pockets. Every weapon, vehicle, and device connected, sharing data, constantly aware of the presence and state of every other node in a truly global network. The effect: an unimaginably large cephapoloidal nervous system armed with the world’s most sophisticated weaponry.

In recent months, the Joint Chiefs of Staff put together the newest version of their National Military Strategy. Unlike previous ones, it is classified. But executing a strategy requiring buy-in and collaboration across the services. In recent months, at least two of the service chiefs talked openly about the strikingly similar direction that they are taking their forces. Standing before a sea of dark- blue uniforms at a September Air Force Association event in Maryland, Air Force Chief of Staff Gen. David Goldfein said he had “refined” his plans for the Air Force after discussions with the Joint Chiefs “as part of the creation of the classified military strategy.”

The future for the Air Force? The service needed to be more like a certain electric-car manufacturer.

“Every Tesla car is connected to every other Tesla car,” said Goldfein, referring to a presentation by Elon Musk about the ways his firm’s vehicles learn from their collective experience. “If a Tesla is headed down the road and hits a pothole, every Tesla that’s behind it that’s self-driving, it will avoid the pothole, immediately. If you’re driving the car, it automatically adjusts your shocks in case you hit it, too.”

Goldfein waxed enthusiastically about how Tesla was able to remotely increase the battery capacity of cars in the U.S.Southeast to facilitate evacuation before the recent hurricanes.

“What would the world look like if we connected what we have in that way? If we looked at the world through a lens of a network as opposed to individual platforms, electronic jamming shared immediately, avoided automatically? Every three minutes, a mobility aircraft takes off somewhere on the planet. Platforms are nodes in a network,” the Air Force chief said.

The idea borrows from the  “network centric warfare” concept that seized the military imagination more than a decade ago. But what leaders are today describing is larger by orders of magnitude. It’s less a strategy for integrating multiple networks into operations more efficiently than a plan to stitch everything, networks within networks, into a single web. The purpose: better coordinated, faster, and more lethal operations in air, land, sea, space, and cyberspace.

So the Air Force is making broad investments in data sharing. Maj. Gen. Kimberly A. Crider, the service’s first data officer, is setting up a series of experimental tests in the Nevada desert at Nellis Air Force Base near Las Vegas, seeking to better understand “what happens when we actually connect into this resilient and agile network” said Goldfein. The Air Force’s current experimentation with next-generation light tactical attack aircraft are as much about hardware as networks, he said. “Not only what can I buy and what can they do, but more importantly, can they connect? Can they actually share? And can we tie it to a new network that’s based on sharable information that gets me beyond the challenges I have right now in terms of security?”