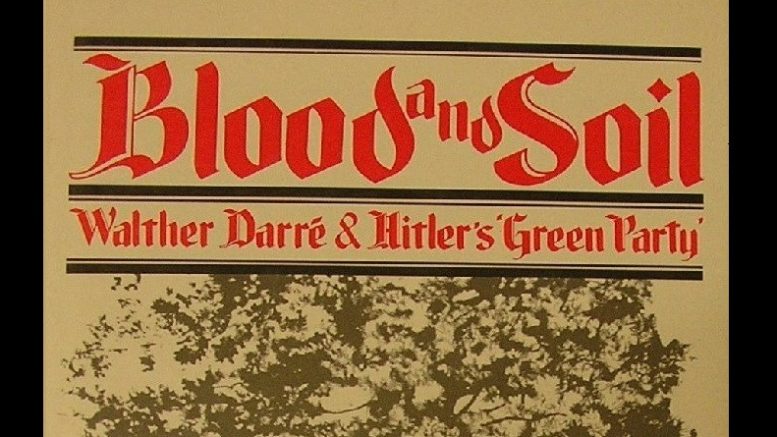 This article provides a critical historical between the doctrines of Nazi Germany and modern Sustainable Development, Green Economy and Technocracy. I have documented that the U.S. Technocracy movement, once based at Columbia University in 1932, established a sister organization in Nazi Germany by 1933.  Technocracy was very appealing to German scientists and engineers and while the ideology lived on, the organization itself was terminated by Hitler because of perceived competition to his budding dictatorship. Nevertheless, today’s doctrine of Sustainable Development, aka Technocracy, finds deep roots in Hitler’s environmental ideology and practice. Needless to say, modern agents of Technocracy will go to great lengths to distance themselves from these historical facts. ⁃ TN Editor

Why study history, and such an ugly subject as the Nazi rise in the Weimar Republic?  Because, quoting George Santayana, those who cannot remember the past are condemned to repeat it.  It seems we have forgotten a lot, because, as a civilization, we are repeating the mad Nazi schemes of renewable energy on a massive scale.

A good source document is this book: 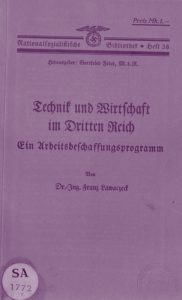 Cover of Technology and Economy in Third Reich: A Program for Work by Franz Lawaszeck, published in 1933

Dr. Franz Lawaszeck was an inventor and manufacturer of hydropower turbines in Bavaria.  As an early member of Nationalsozialistische Deutsche Arbeiterpartei (the National Socialist German Workers’ Party or Nazi Party), he soon became a prominent spokesman about the economic policy of the party, especially energy policy.  He was clearly in the left-wing anti-capitalist part of the party and had a close relation to other leftist National Socialists such as Feder, Streicher, Himmler, Backe, Goebbels, etc.  His book starts by decrying the capitalist state and calling for the life-essential equilibrium that can exist only in a corporatist state.

Dr Lawaszeck begins discussing energy on page 10.  Big industries in a capitalist society have an advantage in that they can produce their own power on site for 1.5-2.0 pfennig/kWh, whereas small businesses pay 10-25 pfennig/kWh.

Then, on to page 12 and the hydrogen economy:

It seems that the transformation of society to a hydrogen society is an important step to a new industrial revolution.  We shall use this “vorsprung durch technik” [advantage by technology].  Hydrogen engines are more powerful than engines driven by diesel or benzene.  With the inexpensive oxygen, it will be cheaper to manufacture and weld steel.  So we could successfully compete on the world market and export more.  We can then pay back our national debt, even when we have reduced the interest to zero.

On page 47, he gets into the intended Nazi transformation of the power industry:

In short, industry’s needs can be filled by hydro-wind power and coal.  Coal is wasted because it is so cheap, so long-term economic effects are not taken into consideration.  Coal would be much better utilized for making valuable chemicals and other products.  Hydro and wind power can provide up to 80% of energy.  The renewable energy is flowing and free.  Why aren’t they used more?  Interest on money is the greatest obstacle for making hydro and wind profitable. As long we have interest on money, it will restrict the use of hydropower.

Then on to the hydrogen economy on page 60:

Our mission is to build the new hydro and wind power plants independent of the electrical grid, so they produce valuable storable energy in the form of hydrogen gas.  Hydrogen can easily be stored and transported in pipelines.  Hydrogen will be produced by pressure electrolysis, so the gas will be compressed without extra energy consumption. 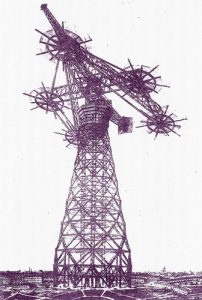 And then more on wind power:

Wind power, using the cost-free wind, can be built on a large scale.  Improved technology will in the future make it no more expensive than thermal power.  This is technically and economically possible and opens up a quite new life-important type of power generation.  The future of wind is no longer small windmills, but very large real power plants.  The wind towers must be at least 100 m [330 ft] high, the higher the better, ideally with rotors 100 m [330 ft] in diameter.  This kind of high cage mast is already built in the shape of high radio masts.

Also from the Nazi national newspaper Volkischer Beobachter (the People’s Observer) of February 24, 1932:

In a sensational speech by the constructor of the biggest steel towers in Germany, the well known engineer Hermann Honnef from the Rhineland, at the Institute of Physics of the Technical University [Hochschule] in Berlin, mentioned that in the height between 70 to 90 meters [230 to 300 ft], a high wind zone is starting that can deliver wind energy.  Honnef had in yearlong research constructed a high-zone wind power project, which he declared in details.  The

influence of variable wind is eliminated totally.  The most interesting result of his experiments is that it is possible to use the different strengths of wind in different areas to a degree, that only 3 to 5% in the yearly peak demand is left.  This is a huge improvement compared with the much bigger variability of hydro power.  He will combine hydro power with his wind power constructions, which are delivering the base electricity, and in this way improve the utility of hydro power considerably.

The surplus electricity from the windmills, situated along the sea coast, will be used for the production of very inexpensive hydrogen.  This will make many products less expensive.  Fertilizers will fall in price.  The hydration of coal to liquids will be cost-effective.  The cost can be reduced from 17 pfennig per litre [64 pfennig per gallon] to 7-8 pfennig per litre [26-30 pfennig per gallon].  In this way about one billion Reichsmark can be saved, which today goes abroad (for importing oil).  The 300,000 workers in the coal mining industry can keep their jobs, 200,000 in the mines and 100,000 for the liquefaction of coal.  The cost savings will make it possible that an additional 400,000 workers can be paid in the transforming process of the industry

Big and small farms shall get the possibility to purchase electricity in surplus times at very reasonable prices, from 6 p.m. to 8 a.m. and 12 noon to 1 p.m.  At least 1 million new small farms shall be established. The cheap electricity makes it possible to heat the land, and then get a third harvest.  Again, billions can be saved, which we normally pay to foreign countries for vegetables, salad, fruits, etc.  During the night, electricity of about 1 kWh for 1 square meter [11 square feet] of land will be sufficient.

One of the 1,300-foot-high wind towers would have taken 27,500 tons of steel to make, approaching the amount used in the Scharnhorst.  So wiser heads prevailed, and the Nazi renewables push petered out by 1936.  But another pernicious Nazi influence was rising. Hermann Flohn, born in 1912, received his doctorate in 1934 and began work for the German Meteorological Service.  In 1941, he published the first German-language article on global warming, the title of which translates as The Activity of Man as a Climate Factor.  Also in that year, he became the chief meteorologist for the Luftwaffe High Command, providing advice for Operation Barbarossa.  Herr Flohn survived the war and was still pubishing alarmist papers on global warming 40 years later – for example, the title of this paper in the journal Umschau in 1980:

Translates as C02-Induced Warmth More Dangerous than Nuclear Energy.  These sentences tell you all you need to know from it:

Up to a value of 450 ppm, there are apparently only risks that can be countered by an adaptation strategy[.]

A really catastrophic climate can only be expected at about 750 ppm: the freezing of the Arctic ice ocean shifts the climate and precipitation belts around 600 to 800 km [375 to 500 mi] to the North Pole (less to the South Pole).

So if you have ever wondered about the intellectual origins of renewable energy and global warming, they had their beginnings during an ugly period of history – through misanthropic schemes created by people with a repulsive Weltanschauung.

Financial institutions and investment houses that funded the NAZIs were from around the world, Wall Street included. Working on a sustainable future was being pursued in Britain and the US who were corporatists long before any other nation. The fascist concept of Mussolini was based on his experience of corporate power of WWI which he found the superiority of the Wilson War Industries Board and methodology superior to all others. Hence, Union Bank Corp, Brown Bros. Harriman and other’s investments as well as the two largest banking interests in Germany, both were zionist. The British through the BIS established in… Read more »