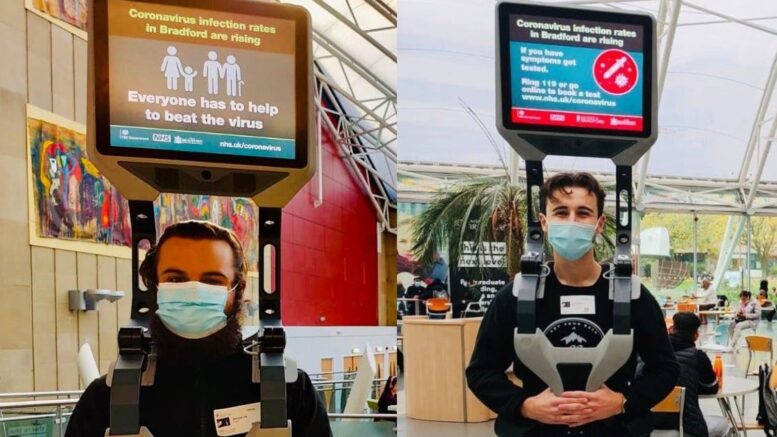 Please Share This Story!
PDF 📄
If 1984 hasn’t arrived in America just yet, it certainly has taken over in the UK. The picture says it all: roaming teletubbies with TV’s on their shoulders proclaiming the latest COVID propaganda from the Ministry of Truth. Bizarre. ⁃ TN Editor

In one of the most desperate and bizarre moves yet, a local government in the UK has begun recruiting men to walking the streets with TVs strapped over their heads, supposedly to help police during a highly unpopular lockdown.

Bradford Council in Yorkshire announced their new ‘iWalkers’ scheme, were local council saw staff and volunteers are deployed onto the streets with a 19 inch screen weighing 18 lbs, mounted on their shoulders.

According to reports, the program ran for two days before it began to go horribly wrong. The government scheme was so ridiculous, residents thought it might have been satire at first, or a prank, not believing that the local government had lost the plot to such a degree. When they realized the plan was actually a real government initiative, the public backlash was severe, and so embarrassed council officials panicked and removed their Facebook post detailing their ‘exciting new program.’

A number of outrageous comments, both in person and online, were hurled at the walking Robocop-like human propaganda digital billboards

These real-life Teletubies were supposed to walking the city and town streets, wearing masks, while their TV’s would be pushing out government propaganda on COVID, designed by government behavioural insights team and applied behavioural psychologists – to nudge residents into tighter lockdown compliance, and to keep the public abreast of minute-to-minute ever-changing “coronavirus rules and restrictions.”

According to reports, the cost of Bradford’s COVID Teletubies is being paid for through Government funding of “Covid-19 communications.”

Local government officials denied they had deleted their new initiative because of public embarrassment, and instead claimed tit was suddenly taken down because of public comments that supposedly “crossed the line into abuse of people who are working hard to help residents and workers in Bradford District stay safe and stop the spread of the virus.”

I have a dream: UK Gov’t Hires Men To Stand In Public With TV On Head For Organic Food For Free… Muhahaha….

When OH WHEN are people going to actually LAUGH at this GAKE VIRUS that has ruined so many peoples lives and ALL FOR A GLOBALIST AGENDA, these Council Members need to see what happens when you punish your local people, the view from a lamp post will be high enough.. ENOUGH is ENOUGH, and as for GATES never been tried on humans before EXPERIMENTAL untested EVER, Eugenic MODE rNA Bio Jabs,if this is Genocide on a world basis I dont know what is, these creatures need to be tried for crimes against humanity and executed.. We are back in WW2… Read more »

Depopulation, at it’s finest….their killing so many people, mostly older folks….I sure wish there was something ANYBODY could do, to stop this madness!! And Biden, the idiot, is just going to keep the ball rolling…..so sad.

Welcome to the UK folks. This is just hilarious. Hope other towns/cities don’t try this crap!!

COVID Teletubbies😅. Why not?