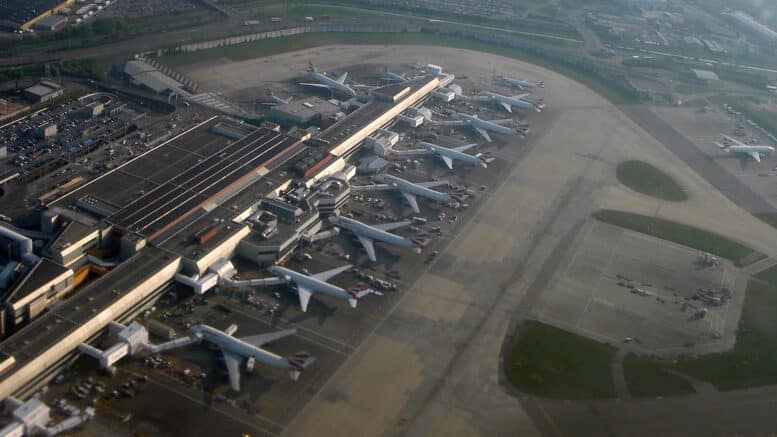 Please Share This Story!
PDF 📄
If you obey the government and submit to taking the vaccine, you will be allowed to travel freely. If not, you will be on permanent lockdown until you decide to comply. This is 100% reminiscent of Nazi Germany’s infamous line, “Your papers, please”. ⁃ TN Editor

The British government is reportedly set to introduce vaccine stamps in passports by next year for those who have been inoculated against the Chinese coronavirus, ostensibly to boost the travel industry.

The vaccine stamps are being worked on by the Department for Transport (DfT), as airline bosses throughout the world look to make such restrictions mandatory for traveling.

A supporter of the passport stamps, Conservative MP James Sunderland, told The Telegraph: “Pets need a vaccination passport when travelling between the UK and Europe and this would be a fantastic way of ensuring freedom of movement for people too.”

“We must do everything possible to boost the economy by re-opening our travel, hospitality, leisure and business sectors and how fantastic would it be to have our planes, trains and boats full again.

“A vaccination stamp is simple, would save all the hassle at either end and really boost confidence.”

Government sources told the newspaper that Aviation Minister Robert Courts is “upbeat and supportive” of the idea. Prime Minister Boris Johnson also said earlier this month that his transport secretary Grant Shapps was “looking at all such schemes”.

Some Airlines have already said they would require such stamps after the international rollout of vaccines, with the CEO of Australian airliner Qantas, Alan Joyce, saying last week that proof of inoculation would be a “necessity” to travel on the company’s aeroplanes.

Korean Air, the largest airline in South Korea, alongside New Zealand Air, has said that they may be forced to require vaccine stamps because governments may implement mandatory vaccines in exchange for reopening their borders to international travel.

The chief executive for the Irish budget airline Ryanair, Eddie Wilson, said that they are unlikely to require the stamps, however, saying that it is unfeasible to mandate such restrictions in Europe.

“With short-haul and freedom of movement of people in Europe… I think we’ll see an entirely different landscape come spring and early summer, not really relevant for short-haul and European travel,” Wilson said.

“In Paris, if you were to choose no vaccination… you’d just get a train instead,” he added.

I’m trying to use up all of my airmails as quickly as possible and do away with air mile credit cards. This whole “choke point” thing will eventually come to the US if Biden-Harris get into office. Pretty soon, a vaccine stamp will be required to go grocery shopping. This is when the idea of a civil war will probably come into fruition. Most people do not understand the science behind the RNA viruses, you can check out Dr. Judy Mikovits’ interview on my website (cloudedtitles.com) for free. At least we’re trying to get the word out about the technocrats.… Read more »

Hummm, I recall something in the prophetic book of the Apocalypse about a “mark of the beast” accepted on the hand or forehead of all people, without which a person could not buy or sell. . . .” . If you don’t accept this pernicious vaccine (which will permanently alter your DNA or RNA) This policy will permanently maroon you in whatever country you’re in when the law goes into effect. I have also read that these vaccines may contain the “luceriferase” technology, –which will make your skin cells glow faintly greenish under UV light– which means that a gatekeeper… Read more »

And we ask how 6 million Jews could have been led to slaughter so easily??

This news breaks my heart. This has become insanity. And it is not only happening in UK, but I can see it happening all over the world.. We are all citizens of the free world and no country or law should be forcing someone to inject them selves with something in order to travel. And god knows what the side or long term effects can be. We have to stop this madness and stand up against these people who are mandating this. It’s a free world! My body, my choice! We are all children of this earth – let’s fight… Read more »

How? Our politicians around the world have sold our countries and us out to the globalist elite behind the UN / one world government. I am grateful that Hungary, Poland, Slovenia, and Czech Republic buck the EUSSR supra-state.
I’m glad the people of the UK (to their woke leaders’ dismay) voted for Brexit– I hope the Brits genuinely escape, and are not gulled into a “BRINO” –Brexit in name only. . . The US is luckier than Britain, who has no “2nd Amendment rights”. Biden & co will try to subvert it by back-door legislation any way he can.