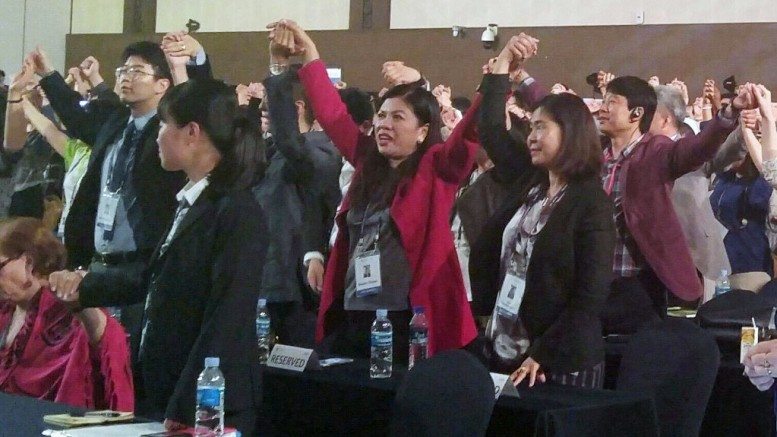 TN Note: When the United Nations says that it is “committed to continue to support and partner with NGOs and academia in our joint efforts to advocate for and successfully implement the 2030 Agenda”, it is talking about NGOs like the Bill & Melinda Gates Foundation that sponsored and funded Common Core State Standards in the U.S. The UN is coming for our kids, and they are not deterred by anything. American parents should rise up in total rebellion against this blatant attempt to brainwash their children. Look at the picture to see their joyful celebration at the closing ceremony.

A global education action agenda affirming the importance of Sustainable Development Goal 4 – ensuring inclusive and equitable quality education and promoting lifelong opportunities for all – was adopted today in Gyeongju, Republic of Korea.

Speaking from the podium at the 66th United Nations Department of Public Information (DPI)/Non-Governmental Organization (NGO) Conference, Ms. Cristina Gallach, UN Under-Secretary-General for Communications and Public Information, said “This Conference has demonstrated another example of the value for the United Nations in investing in partnership with academia and NGOs.”

The Gyeongju Action Plan provides concrete guidance for NGOs around the world to enhance their ability to lobby governments to commitment to implementing the SustainableSustainable Development Goals and mobilize NGOs in communities on the ground.

“The United Nations is committed to continue to support and partner with NGOs and academia in our joint efforts to advocate for and successfully implement the 2030 Agenda,” Ms. Gallach continued.

The newly adopted Action Plan includes a series of concrete measures for NGOs around the world to jump-start implementation of the 2030 Agenda at the grass roots level.

Dr. Scott Carlin, Conference Co-chair and Associate Professor of Geography at Long Island University, said “NGOs from around the world brought passion and expertise to lively final consultations on the outcome document. We are grateful for all of the inputs received and very proud of the Gyeongju Action Plan.”

“We hope that Gyeongju was an inspirational setting for finalizing a truly unifyingaction plan that will be useful for NGOs, wherever they are working,” added Co-Chair Dr.Yukang Choi.

For the first time in the history of the DPI/NGO Conference, youth also developed and issued a Youth Declaration.

Ms. Gallach pointed out that youth had “come in great numbers, demonstrating the value that they see in partnering with the United Nations.”

Ahmad Alhendawi, the Secretary-General’s Envoy on Youth, noted “the Conference not only reinforced the critical role of NGOs to achieve a vision for the 2030 Agenda, but also stressed the urgency for greater investments in education for Global Citizenship to unlock the potential of this massive generation of children and youth.”

“The Youth Declaration is a necessary reminder that young people are needed as leaders and decision-makers not only in youth forums and special-purpose councils, but in those spaces where the course and direction of society as a whole are determined,” added Ms. Rameshfar.

The Action Plan was drafted through a global multi-stakeholder consultation process, leading up to, and during the conference. It was adopted at the Conference’s final plenary session and will be shared widely with civil society as well as the UN Secretary-General, the UN System, Member States and learning communities.