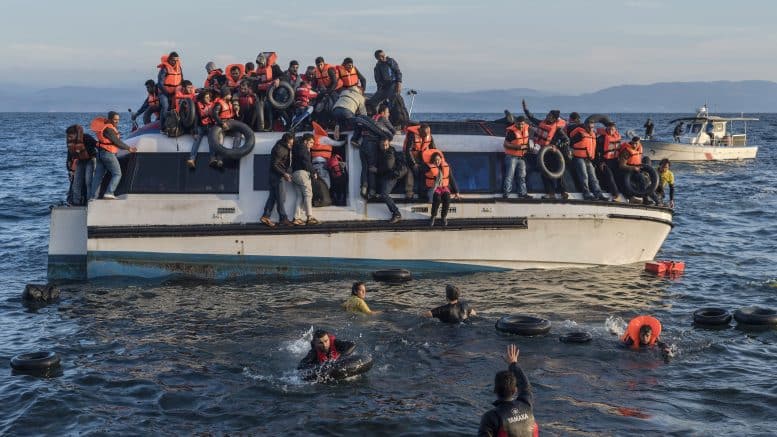 UN migration champion Peter Sutherland is dead, but the UN continues to lever open borders to let the migration invasion continue. This is not surprising considering the overwhelming influence held at the UN by Islamic nations who are supplying the ‘migrants’ to Europe and elsewhere. Ultimately, the UN wants to achieve a borderless world with no migration restrictions. ⁃ TN Editor

Governments that crack down on migrants are only harming themselves, UN Secretary-General Antonio Guterres warned Thursday ahead of UN talks on a global response to migration boycotted by the United States.

Guterres presented a report to the General Assembly on ways to address the plight of the 258 million international migrants, some of whom are trapped in legal limbo.

“They impose barriers to having their labor needs met in an orderly, legal fashion.”

President Donald Trump’s administration is threatening to deport thousands of immigrants who came to the United States illegally as children and were allowed to stay under the Deferred Action for Childhood Arrivals (DACA) program, which Trump has since scrapped.

UN member-states will next month open negotiations on a global compact for migration that would encourage governments to offer more legal venues for migrants, but the United States will not be at the table.

US Ambassador Nikki Haley cited concerns over sovereignty, saying “our decisions on immigration policies must always be made by Americans and Americans alone”, even though the document is non-binding.

Calls for stronger cooperation to address migration followed the 2015 refugee and migrant crisis in Europe, when countries were overwhelmed by the flow from Syria and Libya.

The total number of international migrants has grown by 49 percent since 2000 and now represents 3.4 percent of the world’s population, according to the United Nations.

Why does communist China or N Korea not allow immigration into their countries?

Europe is already a third world dump, invaders coming in unabated turning these countries with help of the EU leaders into a Muslim caliphate with soon to be mass executions and slavery as history shows they have done elsewhere. Will it be like this here soon? Since most Americans are so dumbed down I can see it happening if we get liberal POTUS elected. US politicians and church leaders don’t care about stopping it or their kids and g’kids future. UN agendas rule. (jihadwatch.org, pamelageller.com, gatesofvienna.net)