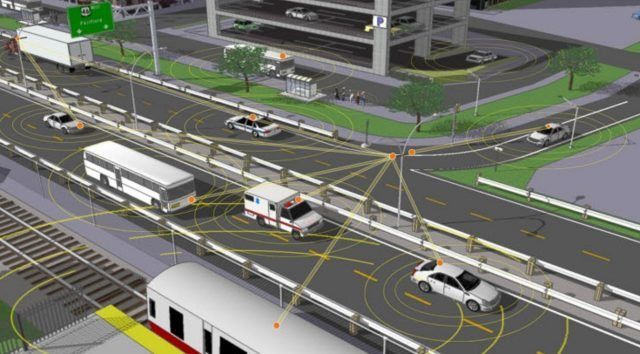 Driving in the future will be networked multiple times over with GPS, land beacons, networking with other cars and features, and more. Privacy will be demolished and scientific dictatorship will be enabled. ⁃ TN Editor

Vehicle-to-infrastructure (V2I) communication works. A demonstration at the Washington Auto Show provided road information and warnings in three scenarios: a curve approached too quickly, a car approaching a traffic light turning red, and roadway construction with a closed lane.

The demo was part of the Washington Auto Show’s media days. Where other shows are big on new car intros, Washington bills itself as the Public Policy Show with a two-day forum (Mobility Talks) featuring members of Congress, automaker experts and representatives of the consumer (this year, Gary Shapiro, head of CES and the Consumer Technology Association). The V2I demo was also part of the show, as hybrid, EV and hydrogen-car media ride-and-drives have been in the recent past.

The National Highway Traffic Safety Administration (NHTSA) wants to see vehicle-to-vehicle connectivity implemented in new cars starting in the next five years. Like much in Washington, that timetable is very much dependent on the new administration and its priorities. V2V may well save lives, it will certainly add to the cost of cars, it will probably reduce crashes, and it will mean additional regulations. In the meantime, the DC roadshow went on with a demo of V2X (vehicle-to-everything) communications. V2Xcomprises the more commonly heard terms V2V (vehicle-to-vehicle) and V2I (vehicle-to-infrastructure).

The demos were held in the vast parking lots of RFK Stadium, two miles from the Capitol, in areas that weren’t taken up by dozens of tractor trailers retrieving and hauling away staging, platforms, and other materials from the presidential inauguration the week before. It was staged by Crash Avoidance Metrics Partners LLC (CAMP), working on behalf Fiat-Chrysler, Ford, Honda, Hyundai, General Motors, Kia, Mazda, Nissan, Subaru, and Volkswagen.