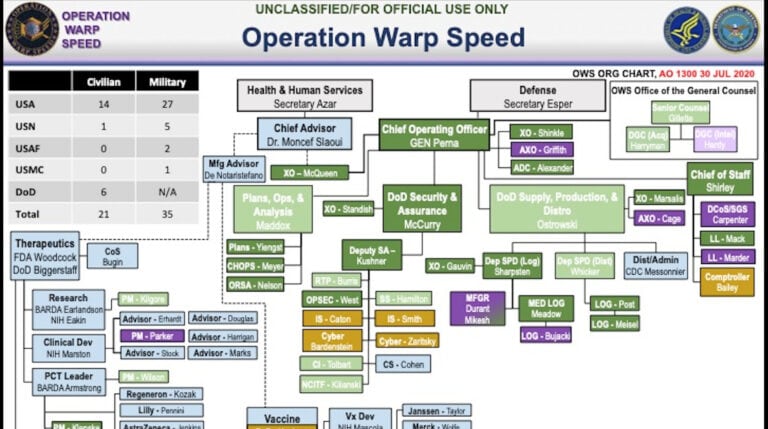 Please Share This Story!
PDF 📄
Likened to the Manhattan Project by President Trump, Operation Warp Speed is the first ever project to blanket U.S. soil with military operations that specifically targets civilians. However, COVID-19’s fizzle is hardly comparable to building nuclear bombs to conquer Japan.

There is ample civilian capacity already in place to deliver vaccines, if that is the goal. Amazon alone could deliver anything to anywhere in 24 hours, and it already knows every single address in America. The military doesn’t have a clue by comparison. So, why is the military involved at all? There is no acceptable answer. None.

But, it is not just military “involvement” at stake here. It is military dominance and its generals are clearly in charge, under the direction of Defense Secretary Mark Esper and his commander-in-chief, President Trump. Furthermore, the stated delivery goal is 300,000,000 doses of vaccine, representing 91.4% of our entire population. With at least 40% of the population already shying away from any COVID-19 vaccination, the only way this many vaccines will ever be used is to mandate them under the threat of force. ⁃ TN Editor

When President Trump unveiled Operation Warp Speed in May, he declared that it was “unlike anything our country has seen since the Manhattan Project.”

The initiative — to accelerate the development of Covid-19 vaccines and therapeutics — lacks the scale, and the degree of secrecy, of the effort to build the atomic bomb. But Operation Warp Speed is largely an abstraction in Washington, with little known about who works there other than its top leaders, or how it operates. Even pharmaceutical companies hoping to offer help or partnerships have labored to figure out who to contact.

Now, an organizational chart of the $10 billion initiative, obtained by STAT, reveals the fullest picture yet of Operation Warp Speed: a highly structured organization in which military personnel vastly outnumber civilian scientists.

The labyrinthine chart, dated July 30, shows that roughly 60 military officials — including at least four generals — are involved in the leadership of Operation Warp Speed, many of whom have never worked in health care or vaccine development. Just 29 of the roughly 90 leaders on the chart aren’t employed by the Department of Defense; most of them work for the Department of Health and Human Services and its subagencies.

Operation Warp Speed’s central goal is to develop, produce, and distribute 300 million doses of a coronavirus vaccine by January — and the military is intimately involved, according to Paul Mango, HHS’ deputy chief of staff for policy. It has already helped prop up more than two dozen vaccine manufacturing facilities — flying in equipment and raw materials from all over the world. It has also set up significant cybersecurity and physical security operations to ensure an eventual vaccine is guarded very closely from “state actors who don’t want us to be successful in this,” he said, adding that many of the Warp Speed discussions take place in protected rooms used to discuss classified information.

“This is a massive scientific and logistical undertaking,” said Mango. “We are weeks away, at most, a month or two away from having at least one safe and effective vaccine.”

Despite the military’s dominance, the chart also includes Nancy Messonnier, the director of the CDC’s National Center for Immunization and Respiratory Diseases who was almost fired by Trump in February for warning the public about the growing Covid-19 pandemic. Public health and drug industry officials told STAT that Messonnier and Gen. Paul Ostrowski, her direct superior, serve as the initiative’s main contacts on all questions related to the distribution of an eventual vaccine. One public health official said that Ostrowksi, an expert on military acquisition, defers to Messonnier on matters of public health.

The military’s extensive involvement in the development and distribution of a vaccine is a departure from pandemics of the past, but it is fitting for Trump, who has gushed about his love for “my military” and “my generals.” While the military was tangentially involved in public health crises like the H1N1 pandemic of 2009, some public health leaders have raised concerns about what they see as their marginalization during the pandemic.

One senior federal health official told STAT he was struck by the presence of soldiers in military uniforms walking around the health department’s headquarters in downtown Washington, and said that recently he has seen more than 100 officials in the corridors wearing “Desert Storm fatigues.”

“Military personnel won’t be familiar with the health resources available in a community,” said John Auerbach, CEO of Trust for America’s Health, a group closely aligned with public health departments. “They don’t know who the doctors are or where the community health centers are located or what resources they have. They don’t know where the pharmacies are. Public health people do know, that’s part of what they do.”

Military officials, however, contend that the U.S. Army excels at complex challenges — like distributing vaccines that might need to be transported at subzero temperatures.

“You know the old joke about, ‘You and what army,’ right?” said Andrew Hunter, a Defense Department expert at a Washington think tank, the Center for Strategic and International Studies. “They routinely do things that are more complex, even than this vaccine job, all the time.”

Mango told STAT the operation has kept some key personnel information under wraps out of concerns for the security of the entire vaccine supply chain, from the warehouses storing vaccines to the computer systems being used to coordinate the effort.

“The secretary has given us the order of being as transparent as we possibly can with one caveat: That we are not compromising anything that has to do with national security,” he said.

An HHS spokesperson declined to comment directly on the chart, citing precedent that the agency does not comment on leaked documents. But the spokesperson noted that at least 600 HHS officials are involved in Warp Speed. The majority of those employees are not captured by the chart obtained by STAT. Among the decision makers not included in the chart are Mango and HHS’ Assistant Secretary for Preparedness and Response, Bob Kadlec. Mango told STAT that he and Kadlec personally sign off on every business agreement made by HHS for Operation Warp Speed.

Mango also added that the vast majority of scientists working on Operation Warp Speed work for the companies the effort is funding.

“There’s really not a need for anyone to place scores of scientists inside HHS or DOD to get this done,” Mango said. “Quite honestly, we are not conducting any science whatsoever inside the government to support Operation Warp Speed, none.”

He also defended the military’s involvement in the initiative, though he insisted that it is primarily supporting efforts led by public health officials at the CDC.

“There are quite honestly certain logistical elements of this that the CDC has never, ever been asked to do, and why not bring the best logisticians in the world into the equation?” Mango said.

Beyond obtaining the internal document from a federal official, STAT interviewed companies funded by Warp Speed and more than a dozen key officials who have worked closely with the organization’s leaders. The reporting sheds light on the high degree of organization and specialization within the organization, as well as the extreme demands the initiative is placing on the companies it funds.

Operation Warp Speed’s central goal is to develop, produce, and distribute 300 million doses of a coronavirus vaccine by January. The initiative has poured $10 billion into the clinical development and manufacturing of potential vaccine candidates, and it has stockpiled hundreds of thousands of doses of as-yet-unproven immunizations. Warp Speed has deals with six major drug companies hoping to develop Covid-19 vaccines and may seek more, the group’s chief adviser, Moncef Slaoui, told STAT earlier this month.

everyone playing a role in this entire scam belongs to GUNATANAMO, NOW.

FOR SURE THIS IS PURE UNADULTERATED FASCISM!

I’d rather take a shit of covid-19! They will have to kill me !! I will NOT take the vaccine!!

Sorry, but nope. Not in this lifetime.