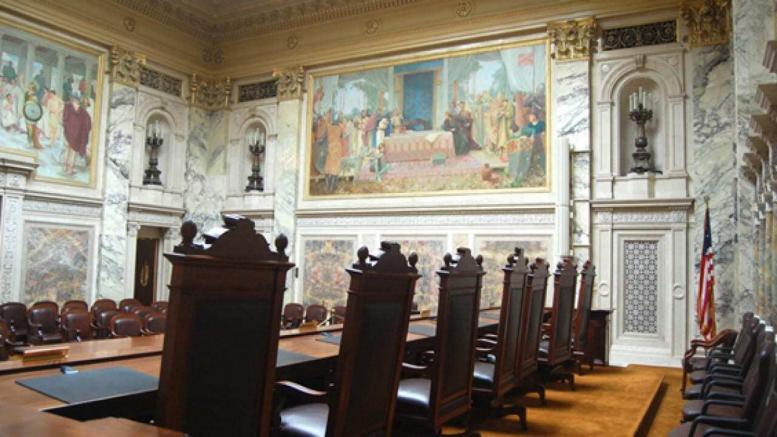 Please Share This Story!
PDF 📄
The Supreme Court of Wisconsin declared that the head of the Department of Health Services broke the law with her stay-at-home order. Legislators and jurists across America should immediately follow suit to test the legality and constitutionality of their own state actions. ⁃ TN Editor

On Wednesday, the Wisconsin Supreme Court struck down a stay-at-home order issued by Department of Health Services Secretary-designate Andrea Palm in order to slow the spread of the coronavirus. While the court did not challenge the Emergency Declaration issued by Gov. Tony Evers (D-Wisc.), it ruled that Palm violated state law by not following proper rulemaking procedures that allow the Republican-dominated legislature some say in the issuing of such orders.

According to the Milwaukee Journal-Sentinel, the ruling strips coronavirus regulations so that “bars, restaurants and concert halls are allowed to reopen — unless local officials put in their own restrictions.”

While the Journal-Sentinel claimed that the court “struck down Gov. Tony Evers’ order,” the very first line of the opinion, written by Chief Justice Patience Roggensack, contradicts this claim.

“This case is about the assertion of power by one unelected official, Andrea Palm, and her order to all people within Wisconsin to remain in their homes, not to travel and to close all businesses that she declares are not ‘essential’ in Emergency Order 28. Palm says that failure to obey Order 28 subjects the transgressor to imprisonment for 30 days, a $250 fine or both. This case is not about Governor Tony Evers’ Emergency Order or the powers of the Governor,” Roggensack argues.

According to the opinion, Palm “broke the law when she issued Emergency Order 28 after failing to follow emergency rule procedures,” and she “exceeded her authority by ordering everyone to stay home, closing all ‘non-essential’ businesses, prohibiting private gatherings of any number of people who are not part of a single household, and forbidding all ‘non-essential’ travel.”

Importantly, Roggensack adds, “We do not conclude that Palm was without any power to act in the face of this pandemic. However, Palm must follow the law that is applicable to state-wide emergencies.” By refusing to do so, she impinged upon the Legislature’s constitutional core power and its functions.” Under Palm’s interpretation, “an elected official could create law applicable to all people during the course of COVID-19 and subject people to imprisonment when they disobeyed her order.”

Republican lawmakers brought the suit in order to have a seat at the table when it comes to coronavirus restrictions.

Hagedorn argued that Wisconsin state law allows the governor’s designate to have this authority. “The legislature may have buyer’s remorse for the breadth of discretion it gave to DHS in (state law). But those are the laws it drafted; we must read them faithfully whether we like them or not.” In 1981, amid the HIV and AIDS epidemic, the legislature gave DHS the power to issue orders.