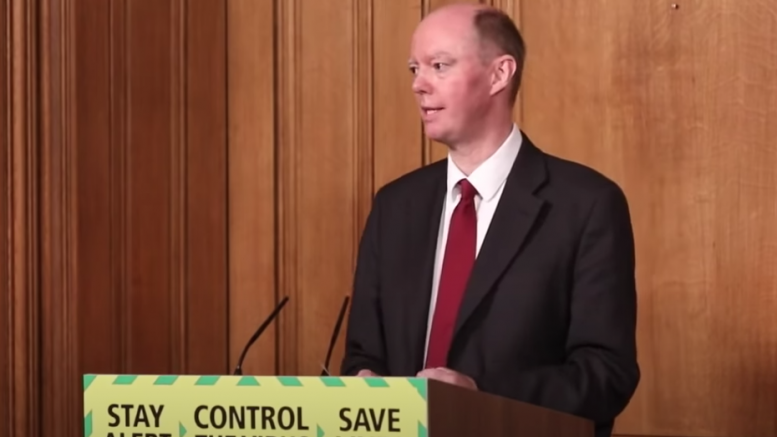 Please Share This Story!
PDF 📄
Despite the overall panic narrative surrounding COVID-19, there are some public officials who are telling it like it is, in this case, the UK’s Chief Medical Officer. Technocrats and Big Pharma fight to suppress such views, even calling them ‘fake news’. ⁃ TN Editor

From the beginning of this crisis we have been pointing out that there are two mutually contradictory messages at the heart of the covid19 rollout, and, just as Orwell describes in 1984, a major point of the exercise seems to be to get people to believe both at the same time.

The first message is that covid19 is terrifying, unique, an existential threat to the human race.

This message is never sourced to much fact, because the facts about the virus don’t really support it. If it cites anything solid it’s the appallingly sloppy and discredited Imperial computer model, or some generic research into the pathology of severe infections or rare viral syndromes, which it tries to spin as being unique to covid19, even though it is not. But mostly it doesn’t cite anything at all. Or really claim anything at all.

It just tells people to be afraid. Very afraid. Of death, of uncertainty, of the ‘virus’, of other people, of ‘fake news’.

The fear being encouraged is not rooted in facts, and is therefore impervious to them.

The second message is that covid19 is actually pretty harmless and no big deal.

This message is rooted in a great deal of fact, because, as we have been pointing out since day one, pretty much all the data coming out about this virus supports exactly this conclusion.

All these sources admit the virus is ‘mild’ or even asymptomatic in the majority of cases, and chiefly a danger only to the already ailing or severely immuno-compromised. Just as most coronaviruses are.

So, Chris Whitty above is only one of many to point this out and this is not even his first go (see here) at explaining clearly that covid19 is only dangerous to a very very small minority of people, and that most who get it will be just fine.

Here’s a slide from his talk on April 30th: 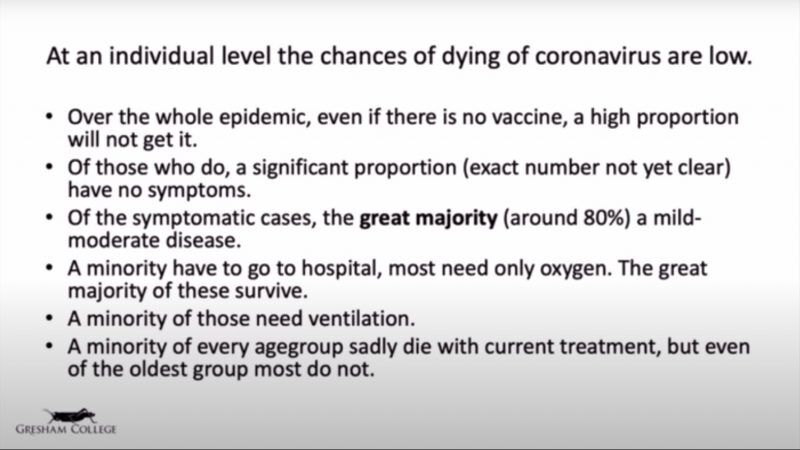 Now, let’s look at what he is saying in the above video, on May 11th [our emphasis]:

[T]he great majority of people will not die from this and I’ll just repeat something I said right at the beginning because I think it’s worth reinforcing:

Most people, a significant proportion of people, will not get this virus at all, at any point of the epidemic which is going to go on for a long period of time.

Of those who do, some of them will get the virus without even knowing it, they will have the virus with no symptoms at all, asymptomatic carriage, and we know that happens.

An unfortunate minority will have to go as far as hospital, but the majority of those will just need oxygen and will then leave hospital.

And then a minority of those will end up having to go to severe end critical care and some of those sadly will die.

But that’s a minority, it’s 1% or possibly even less than 1% overall.

And even in the highest risk group this is significantly less than 20%, ie. the great majority of people, even the very highest groups, if they catch this virus, will not die.

And I really wanted to make that point really clearly…

It seems all the officials want ‘to make that point really clearly’, even while they behave as if it was not true.

There’s plenty of room for speculation there, and we leave it to readers to get into that BTL.

The motives, though, are less important than the basic and undeniable fact – the fear currently gripping the public mind is being simultaneously encouraged and acknowledged as unnecessary by the bodies overseeing the ‘response’.

The truth about this “Deadly Virus” or so we are told is slowly coming out. If or when it does there will be a lot of politicians that will need to be asked some very serious questions.

Nothing will happen and you know it, if you, yes you John, don’t make the politicians lives uncomfortable yourself.

If you have severe heart disease, diabetes, and asthma, then you get COVID 19, you can die. But to what extent is the virus the cause of your death as opposed to the other conditions? Looked at from that standpoint, very few people actually die from COVID 19.

George Orwell was spot on in “1984.” I live in Malibu. At the beach the “Proles” (the low income people from San Fernando Valley) are having a great time. The affluent “Party Members” who are listening to “Big Brother” walk on the beach with masks and fear stricken faces.

URGENT – Global VACCINE Summit on the 4 th June in London. Pls send ASAP this letter to Boris Johnson and to your MP or write your own, version if you wish to ……. Boris Johnson’s email: boris.johnson.mp@parliament.uk . You can find contact details for your MP here: https://members.parliament.uk/constituencies/    Dear Boris Johnson Well, here we are, months later, small businesses destroyed, thousands more on the unemployment register, the economy destroyed and for what? A pandemic which bypasses the vast majority of people, with no significant increase in deaths over a normal flu season. I could write much about what I consider to be… Read more »