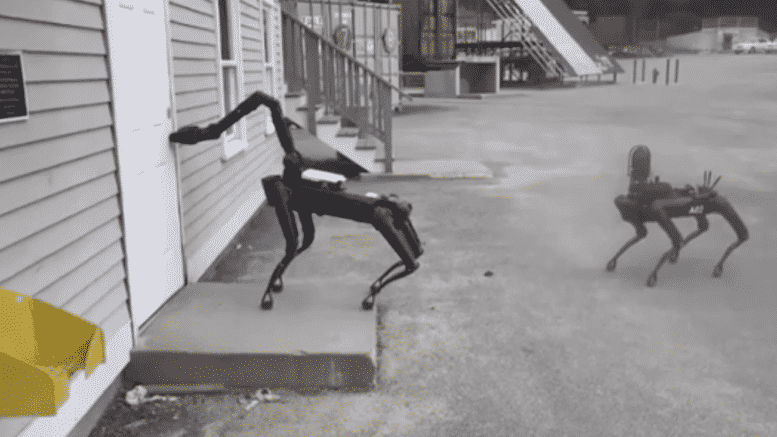 Please Share This Story!
PDF 📄
Short of laws or regulations to control police departments, robotics will play a huge part of future enforcement. Spot the robot dog is seen as a viable replacement for police dots. Future weaponization is almost certain. ⁃ TN Editor

Cops have long had dogs, and robots, to help them do their jobs. And now, they have a robot dog.

Massachusetts State Police is the first law enforcement agency in the country to use Boston Dynamics’ dog-like robot, called Spot. While the use of robotic technology is not new for state police, the temporary acquisition of Spot — a customizable robot some have called “terrifying” — is raising questions from civil rights advocates about how much oversight there should be over police robotics programs.

The state’s bomb squad had Spot on loan from the Waltham-based Boston Dynamics for three months starting in August until November, according to records obtained by the American Civil Liberties Union of Massachusetts and reviewed by WBUR.

The documents do not reveal a lot of details on the robot dog’s exact use, but a state police spokesman said Spot, like the department’s other robots, was used as a “mobile remote observation device” to provide troopers with images of suspicious devices or potentially hazardous locations, like where an armed suspect might be hiding.

tate police say Spot was used in two incidents, in addition to testing.

Boston Dynamics vice president for business development Michael Perry said the company wants Spot to have lots of different uses, in industries ranging from oil and gas companies, to construction, to entertainment. He envisions police sending Spot into areas that are too hazardous for a human — a chemical spill, or near a suspected bomb, or into a hostage situation.

“Right now, our primary interest is sending the robot into situations where you want to collect information in an environment where it’s too dangerous to send a person, but not actually physically interacting with the space,” Perry said.

Spot is a “general purpose” robot, with an open API. That means customers — whether a police department or warehouse operator — can customize Spot with its own software. (State police say they didn’t use this feature.) It has a 360-degree, low-light camera, and an arm.

For all of its potential, Boston Dynamics doesn’t want Spot weaponized. Perry said the lease agreements have a clause requiring the robot not be used in a way that would “physically harm or intimidate people.”

“Part of our early evaluation process with customers is making sure that we’re on the same page for the usage of the robot,” he said. “So upfront, we’re very clear with our customers that we don’t want the robot being used in a way that can physically harm somebody.”

That’s one of the reasons why the company is opting for lease agreements, rather than a sale, Perry said. Boston Dynamics wants to be selective in which companies get access to Spot — and have the ability to take the equipment back if the lease is violated.

Through Procopio, state police said the department never weaponized any of its robots, including Spot.

But while Spot and other tactical robots aren’t designed to kill, they still can. In 2016, Dallas Police sent a bomb disposal robot armed with explosives to kill a sniper who had shot at police officers and killed five. Experts said it was the first time a non-military robot had been used to intentionally kill a person.

That deadly potential, and lack of transparency about the state police’s overall robotics program, worries Kade Crockford, director of the technology for liberty program at the ACLU of Massachusetts. Crockford said they want to see a policy from state police about its use of robotics and a conversation about how and when robots should be used. State police didn’t say whether there’s a current policy about the use of robots, and the ACLU’s records request to the agency didn’t turn one up.

“We just really don’t know enough about how the state police are using this,” Crockford said. “And the technology that can be used in concert with a robotic system like this is almost limitless in terms of what kinds of surveillance and potentially even weaponization operations may be allowed.”