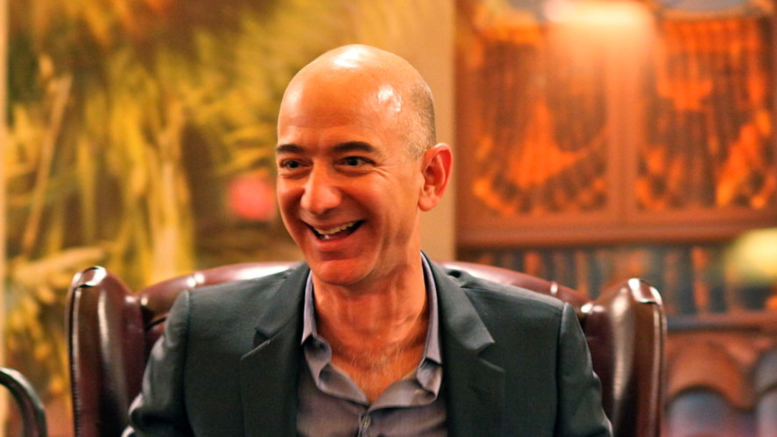 Please Share This Story!
PDF 📄
Amazon is a monopoly in the book publishing industry and has taken to banning existing books from its system that management does not agree with. Other publishers that use Amazon’s print-on-demand services are now refusing new books that it knows Amazon will ban. ⁃ TN Editor

If you wanted to eliminate disfavored ideas from a society, you’d begin by aggregating most of the world’s books onto a single platform. You’d hope to create a global network of gargantuan warehouses, automated to allow next-day fulfillment of customer desires. If you were wildly successful, your company might one day control five sixths of U.S. book sales and generate a market capitalization that rivals the GDP of Canada.

If you also delivered groceries, clothing, and hardware during a pandemic, and hosted businesses’ websites, too—you might become so integral to people’s lives, they would be hard-pressed to quit you. Customers spoiled by the miracle of having milk and toilet paper delivered same-day to their door would be disinclined to protest as you began eliminating books, especially if it was just a few at a time. You’d have become the hand that feeds them; they’d be smart enough not to bite.

Writers themselves might object. But their agents would fall silent; they’d have other clients to think of. Publishers—whose continued viability depends on this central pipeline—would be loath to offer more than token resistance. A momentary stifling of conscience would seem small sacrifice to ensure their other books were spared.  Forget the “firemen” from Fahrenheit 451: You needn’t burn forbidden books if people can’t buy them in the first place.

Last week, Ryan Anderson’s When Harry Became Sally: Responding to the Transgender Moment, vanished from “the world’s largest bookstore.” The hardbacks, the paperbacks—even the used copies of When Harry Became Sally sold by third-party sellers through Amazon—poof, gone. When questioned by Anderson’s publisher, Amazon lamely pointed to a new policy that permits it to bar “inappropriate and offensive” works and also “hate speech.” It never bothered to offer proof or explain how Anderson’s book ran afoul of these guidelines; it apparently didn’t think it needed to.

The New York Post’s editorial board attempted to explain why Amazon targeted this particular three-year old book: Anderson’s “scholarly analysis of transgenderism . . . questions politically correct sacred cows.” But there are plenty of other politically-incorrect volumes sold on Amazon, including Anderson’s 2012 book, What is Marriage? Man and Woman: A Defense—a conservative objection to gay marriage. I suspect What is Marriage’s home on Amazon.com will remain undisturbed—not for lack of controversy, but for lack of relevance.

And here we get to the key difference between the two books: The legality of gay marriage has been settled in America. Whatever people’s private feelings about gay marriage, its legality in America is beyond dispute, and its acceptance by American society, widespread. Opposing it is a dead issue, a loser. And as Amazon well knows, no book is likely to change that.

But transitioning minors—that’s another story. For all the sloganeering about how the sanctity of affirmation-based treatment is settled practice, it isn’t. Leading psychotherapists have challenged “affirmative care” and its abuses have been acknowledged in open court. J.K. Rowling’s well-publicized alarm at the spike in transgender identification among teen girls, followed by the publication of my book, encouraged a widespread backlash against the idea that it is wrong or repressive to question the protocols governing the medical transition of minors.

More importantly, the very week Anderson’s book disappeared, the U.S. House of Representatives passed the Equality Act, which is now headed for a vote by the Senate. If it passes, it will grant biological males who self-identify as “women” an all-access pass to girls’ and women’s sports and safe spaces.

Should a biologically male convict gain access to a women’s prison based only on self-identification as a “woman”? Should a biologically male high school student be entitled to compete in women’s wrestling or sprinting? Anderson’s book argues “no,” for reasons lawmakers might be curious to discover. Which is why, in the end, Amazon picked this week to delete a three-year old book.

Some will argue it is Amazon’s right to drop a book. Though it possesses many of the frightful powers of government and few of the limitations—Amazon is not the government. As a private company, many argue, it retains the right to stock its shelves with whatever it chooses. As someone put it to me on Twitter, “Publix stopped carrying my favorite salad dressing. You know what? I went to another store and bought it.”

This is the “Colorado Bakeshop” argument, which the Supreme Court considered in Masterpiece Cakeshop v. Colorado Civil Rights Commission: Private businesses might have the right not to sell certain things customers want. It’s my cakeshop, damn it, runs the argument. If the proprietor doesn’t want to create a cake celebrating a gay wedding, or anything else that violates his conscience—maybe he shouldn’t have to.

But the argument is inapt: Amazon isn’t a neighborhood bakery. Small independent bookstores can (and often do) claim to be in the business of promoting a certain kind of speech. There are Christian bookstores and feminist bookstores and everything in between. And forcing such stores to sell books they don’t like would compromise the owners’ free-speech rights by forcing them to engage in what is arguably a form of compelled speech. But Amazon operates on a vast scale. Scale is the difference between homicide and genocide, a pickpocket and Bernie Madoff.

Amazon gladly carries Mein Kampf without fear that anyone will attribute its anti-Semitism to the bookseller because Amazon distributes millions of titles.

Nor is it honest to argue that we can impose no restraints on private companies. Businesses are already thoroughly regulated—in terms of whom they may refuse to serve, the minimum pay, and maximum hours and workplace conditions owed to employees. Thanks to the recent U.S. Supreme Court decision, private employers may even be barred from insisting that male employees wear a male uniform. Forcing a multinational on which nearly every American publisher depends to carry the widest array of books imposes no more significant limitation on its freedom.

But most importantly, the Colorado Bakeshop comparison fails because when a small bookshop refuses to carry a specific title, that act carries no significant market consequences. A reader could march into another bookstore and order Anderson’s book. Not so with the pipeline through which five-sixths of America’s books flow.

As a direct result of Amazon’s action, many outstanding books will now go unwritten; they will not be commissioned whenever Amazon’s distribution is the slightest bit in doubt. As I write this, authors are being dropped by agents or politely refused representation, based on what the agents now know Amazon will not carry. “I’m just thinking of your career,” agents will say. “Why not try something a little less inflammatory?” (A little more Amazon-friendly). Publishers will apply endless euphemisms for “no,” to otherwise worthy proposals. Why should publishers spend sleepless nights worrying that Amazon will unaccountably vaporize their investment?

This is the “chilling effect” of censorship, John Milton called the “greatest displeasure and indignity to a free and knowing spirit that can be put upon him.” When censorship is imposed by the government—or the world’s third largest multinational—it forbids new life like a frost.

Had the government banned Anderson’s book, Anderson would now be headed to federal court, where he would prevail. When Amazon acts, the independent writer has nowhere to go. Anderson’s recourse? He can complain about it on Twitter, which hosts any of us only as long as it feels like it.

In a time marked by so much suppression of speech by Big Tech, the muggings can begin to run together. We are already growing accustomed to cancellation. But of all the violence to free inquiry we’ve witnessed in the last year, the deliberate disappearance of a mainstream conservative book is among the very worst.

Remember where you were in February of 2021. Congress fought over a second impeachment of an ex-president. The states debated whether forced truancy would make life easier for America’s teachers. And earth’s largest bookseller—(Internal motto: “Work Hard. Have Fun. Make history.”)—began quietly deleting books.

There are lots of places online to buy books (usually used, but most of the time in pretty good shape). I never buy new books anymore, haven’t for years.