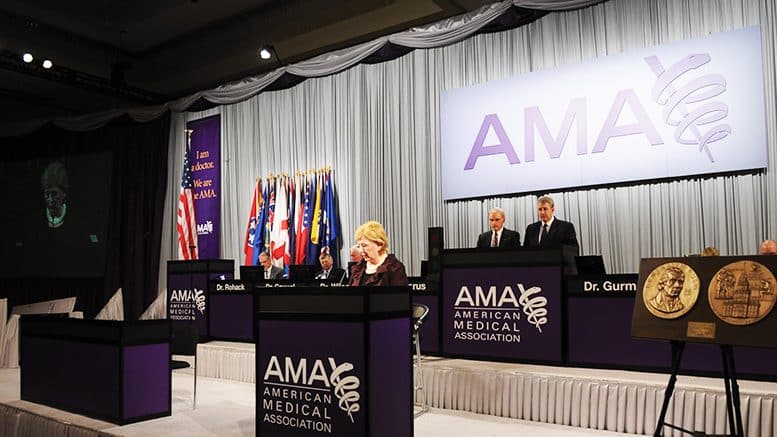 The AMA has long since turned on its would-be patients, thanks to Technocrats within who grant very little value to the human life they are supposed to protect. Furthermore, ethics and morality do not interest the Technocrat mind whatever, leaving only efficiency and pragmatism as goals; indeed, it is the ‘science of social engineering’ that they are pursuing. ⁃ TN Editor

The AMA’s Code of Medical Ethics is a cautionary tale of what happens when medical ethics are grounded in social policy and personal intuitions rather than timeless, universal, and immutable moral truths.

In his prophetic work, The Abolition of Man, C.S. Lewis foretold humanity’s final conflict as a revolution against ourselves, or, more specifically, our human nature. In case you hadn’t noticed, the battle is well underway. Nowhere is this struggle more evident than in the realm of medicine, where stunning technological advances have opened the door to metaphysical mischief.

A microcosm of this conflict can be seen in the American Medical Association’s (AMA’s) Code of Medical Ethics. Curiously, nowhere in this document does the AMA explain its foundational moral principles—a conspicuous omission for a code of ethics. Even more curious is the other conspicuous omission: us. You and me. Oh, sure, there are several mentions of various body organs, human genes, and the like, but nowhere in the text’s eleven chapters will you find any discussion of our human nature. The qualities that ground patient rights and physician duties are simply never mentioned. It is as if the AMA has abandoned human nature as a meaningful determinant of medical ethics.

The AMA’s code makes a drive-by reference to “moral principles, values, and practices,” but never defines them. While it enumerates a short list of “Principles of Medical Ethics,” these are primarily statements of professional hygiene (e.g., physicians should provide competent care, uphold standards of professionalism, respect the law, etc.). The only telling revelation appears in the document’s preamble, which defines medical ethics as also encompassing “matters of social policy.” This is our first clue that the AMA’s code of ethics is something other than a search for universal and immutable moral truths.

The pernicious effect of this approach manifests itself in several of its ethical guidelines and opinions. For example: “The conflict regarding research with embryonic stem cells centers on the moral status of embryos, a question that divides ethical opinion and that cannot be resolved by medical science.” In a literal and very limited sense, this statement is true—a metaphysical definition of life is necessary before science can tell us whether embryos meet that definition—but the AMA’s statement is also grossly misleading.

If it wants to speak for the medical profession on matters of morality and ethics, the AMA must contribute to the discussion by affirming scientific truths about human life at all of its stages—truths that provide support for moral status and its attendant protections. Like, for instance, the fact that every human embryo is a human being, a whole and complete human being. It would also be helpful for the AMA to clarify (given an epidemic of confusion on this point) that our biological nature does not change on the basis of our developmental state, functional capacities, or health.

Granted, it is not the AMA’s job to define human nature, a task properly led by philosophers and theologians. However, medical science has a duty to contribute to this discussion. The AMA’s statement about embryos is an obvious equivocation designed to sidestep scientific truths that are inconvenient to its particular point of view. Regarding a foundational moral issue—what qualities compose membership in the human family and what protections are owed to its smallest and weakest members—the AMA has nothing to say. Irrespective of one’s viewpoint about this particular issue, this sort of evasion should be deeply troubling to all.

Even more troubling is what comes next. Immediately after demurring on the moral status of embryos, the AMA declares: “Embryonic stem cell research does not violate the ethical standards of the profession.” In other words, after telling us that the embryo’s moral status is above its pay grade, it affirms the moral permissibility of embryo-destructive stem cell research. This bewildering display of ethical doublespeak is offered without explanation.

The document is laced with similarly inexplicable statements, seemingly backed up by nothing more than the personal intuitions of its author(s). For instance, regarding gene therapy: “Because of the potential for abuse, genetic manipulation of non-disease traits or the eugenic development of offspring may never be justifiable” [emphasis mine].

The operative word in the above sentence is “may.” They could have written “isnever justifiable” but instead wrote “may never be justifiable.” This is a crucial distinction. The AMA defines its use of the word “may” to mean “that an action is ethically permissible when qualifying conditions are . . . met.” So, I must ask, exactly when is eugenics permissible? If the AMA chooses to leave the door open to a practice most consider abhorrent, we deserve to know what qualifying conditions might lead them to view it as permissible. Even if such circumstances as rare exceptions, it owes us a list of those exceptions. Clarity is a minimum prerequisite for honest discussion. Left as is, this strange statement implies an ethic grounded in power and supremacy rather than equality.

An ethical code formed from timeless moral truths is itself timeless precisely because it is built on truths discovered by discerning thinkers over millennia. By contrast, when an ethical code is grounded only in human thought and human will, as the AMA’s appears to be, the rules can change as quickly as social tastes and preferences shift. That sort of inconstancy should be a grave concern for everyone, but especially for the weakest and most vulnerable among us. As Aristotle taught us over two thousand years ago, moral law is not a mirror used to reflect back to us current cultural trends or fickle personal preferences. Rather, it is the essential and unvarying form of our true (and common) nature as human beings. Our task is to discover the objective truth of moral law, not to concoct it from personal opinions.

Absent from the Battle for Human Nature

Whether by design or accident, the AMA caters to postmodern relativism by excising human nature from its discussion of medical ethics. It also exposes the analytical and deductive pitfalls awaiting those who attempt this approach.

A case in point is its guideline concerning physician-assisted suicide (PAS) and euthanasia. It writes that these practices are “fundamentally incompatible with the physician’s role as healer, would be difficult or impossible to control, and would pose serious societal risks.”

I wholeheartedly support the AMA’s longstanding opposition, and tragic eventsin the Netherlands and elsewhere demonstrate the truth of its statements. Still, we should notice what is missing from this argument defending human life: the person undergoing these deadly procedures.

In my view, this is a stunning omission. None of the AMA’s arguments for opposing PAS and euthanasia respond to the primary question: Are these lethal acts morally justifiable? To answer that question, one must begin by considering the patient and whether that patient’s life has intrinsic value (and if so, why). If human life has innate dignity and value, if human life comprises universal goods that we must promote and defend, then physicians have a duty to protect every human life.

Watch reruns of House M.D., while I enjoy the show very much, it illustrates the premise that Technocrats grant very little value to the human life they are supposed to protect. This attitude is made to seem fun and ingenuous. The doctors in the show couldn’t care less about the life of the patient only killing the disease. I am not sure if this is predictive programming or just an insight to how medicine is actually practiced. Having no medical credentials, who am I to say this isn’t the way things “should” be done.