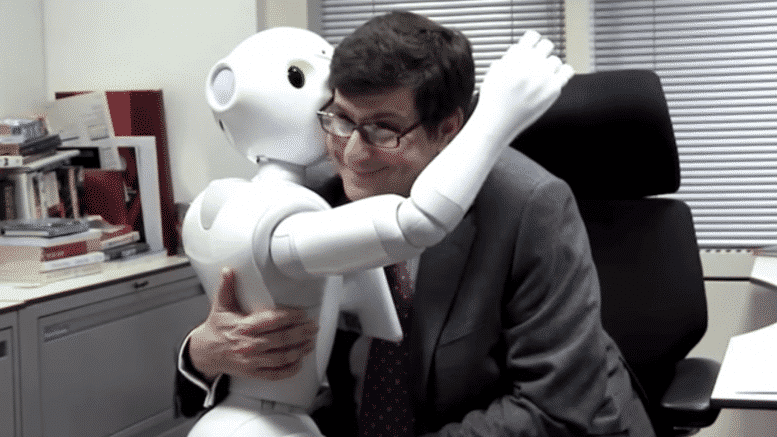 TN Note: Unfortunately, this is the future of health care, and it will be coming to the U.S. soon. When there is no money to pay for actual health-care workers, robots will be a cheap substitute. Nursing homes and elder-care facilities will be easy targets. As the fourth industrial revolution expands, robots are expected to displace humans in virtually every conceivable type of job. Will this be the ‘end of work’ for humans? In a fully-managed science-based society, Technocracy would answer ‘Yes’.

Robots have already invaded the operating room in some hospitals, but in Belgium they will soon be taking on the potentially more difficult task — for robots, at least — of greeting patients and giving them directions.

The Citadelle regional hospital in Liège and the Damiaan general hospital in Ostend will be working with Zora Robotics to test patients’ reactions to robot receptionists in the coming months.

Zora already has experience programming the diminutive humanoid robot Nao to act as a chatty companion for the elderly, offering it as a form of therapy for those with dementia.

Like Nao before it, Pepper has already found work as a receptionist in Japanese hotels, an environment where visitors are likely to be less nervous and more familiar with their surroundings than those arriving at a hospital.

Pepper has a couple of advantages over Nao in the hospital environment. It’s a lot taller — about 1.2 meters high — making it more visible and less likely to be knocked over in a crowded lobby. It also has a tablet computer mounted on its chest, so if spoken communication fails due to background noise or language problems, it can always fall back on the written word, images, and maps.

“From the moment Pepper is not understanding you, everything is shown on the tablet and you can click on the button: You have the same information,” Zora co-CEO Tommy Derrick said.

Zora will begin by putting a robot in each hospital, initially for a couple of hours a week as it gathers data on the robots’ performance, then gradually increasing their presence, Derrick said.

In the first phase, Pepper will just welcome people. “Normally you will have a letter telling you to come to the hospital, so you can go to Pepper and say, ‘I am patient X, here is my card, tell me where to go,'” Derrick said. Pepper will then tell the patient where her appointment is and explain, perhaps using videos, how to get there.

In the second phase of development, the robot could accompany the visitor to her destination, he said.

“Her” destination. Deleting men from public concern, one pronoun at a time.

Is this the Marshall lentini with joint problems? please reply if so, I need to talk to you. Thanks. Vargasfeldman @ gmail.com