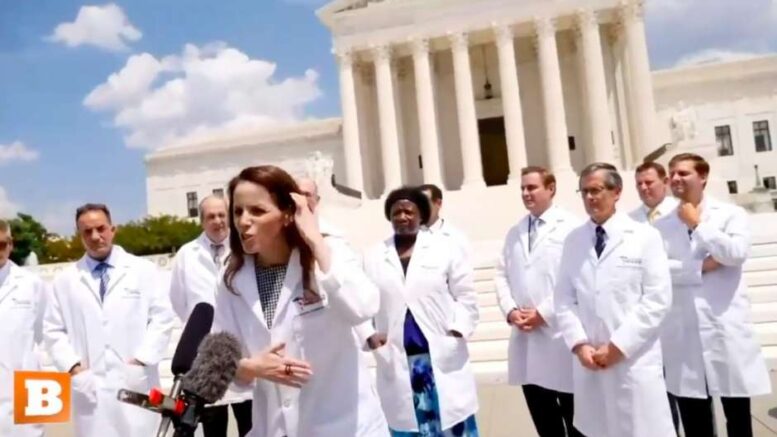 Please Share This Story!
PDF 📄
Apparently, micro-minded Technocrats at a leading website hosting company Squarespace know better how to treat COVID-19 than do highly-trained doctors actually treating patients. This is the utter and Orwellian hypocrisy of Technocracy, claiming pseudo-science to be real and real science to be fake. ⁃ TN Editor

Website hosting provider Squarespace has shut down the website of the group America’s Frontline Doctors following a press conference they held in Washington D.C., according to Dr. Simone Gold. According to a screenshot posted by Gold, the web hosting service shut down the group’s website for “activity that’s false, fraudulent, inaccurate or deceiving.”

Breitbart News recently reported that the Masters of the Universe quickly censored a live stream published by Breitbart News of a press conference held in Washington D.C. by the group America’s Frontline Doctors and organized and sponsored by the Tea Party Patriots. Rep. Ralph Norman (R-SC) was featured at the event and doctors at the event shared their views on the coronavirus pandemic and the medical community’s treatment of the virus.

Footage of the livestream on Periscope, Twitter’s livestreaming platform, had generated 1 million views before being removed by the site. Footage on Facebook had accumulated over 17 million views within 8 hours and had 185,000 concurrent viewers at the time it was streamed. On YouTube, a clip from the event received 80,000 views before being removed by the platform for “violating YouTube’s Community Guidelines.”

Now, the founder of America’s Frontline Doctors, Dr. Simone Gold, stated in a recent tweet: “Our website host @Squarespace has just completely and arbitrarily shut down our website, claiming a violation of their terms of service.”

Gold included a screenshot of an email sent by Squarespace in which the hosting provider stated that the group’s site was “in violation of Section 3.1 of our Acceptable Use Policy regarding activity that’s false, fraudulent, inaccurate or deceiving.”

I read the article: https://healthimpactnews.com/2020/frontline-doctors-on-censorship-were-coming-after-you-big-tech-we-will-not-be-silenced/ The ‘front line doctors’ are really coming after big tech? Really? Can any of these ‘front line doctors’ or anyone else in the medical field for that matter provide a scientific report that shows the alleged SARS-COV2 virus has been isolated and proven to be pathogenic and the actual cause of the COVID19 illness according to the gold scientific standard known as Koch’s postulates? I watched the interview of Dr. Andrew Kaufman by Dell Bigtree https://www.youtube.com/watch?v=E5meH2iAjIU and looked up the four scientific reports he referred to in that interview. Only one of those reports mentioned using Koch’s postulates… Read more »

I saw a portion of the frontline doctor’s cv19 reports. One doctor stated that 200 mg of hydroxy… drug twice a week with a daily dose of zinc had been used with success in treating cv19. I appreciate the truthfulness, dedication and courage of these doctors. I appreciate every doctor who cares about human health and are working to eliminate suffering and disease. But in today’s propagandized, fearmongered, delusional society. It is best in my humble opinion to not let the left hand know what the right hand is doing. I’m sure you all have heard that loose lips sink… Read more »