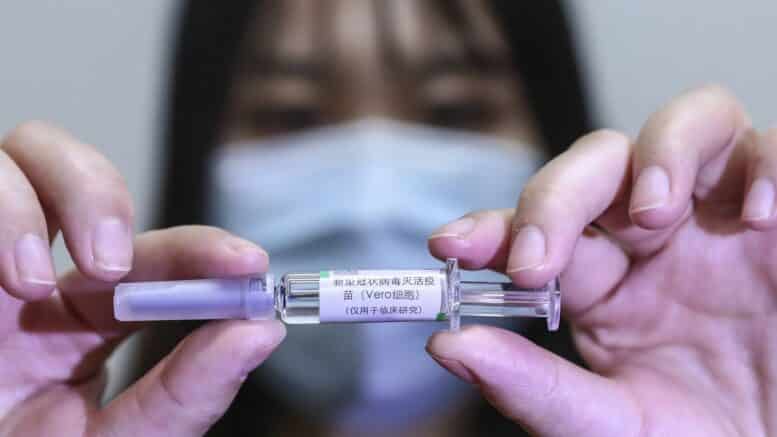 Please Share This Story!
PDF 📄
As a Technocracy, China plays fast and loose with the health of its citizens. Whatever scientists in the West can do, China thinks it can do it better and faster. Chinese citizens are viewed as expendable, human capital. ⁃ TN Editor

First, workers at state-owned companies got dosed. Then government officials and vaccine company staff. Up next: teachers, supermarket employees and people traveling to risky areas abroad.

The world still lacks a proven coronavirus vaccine, but that has not stopped Chinese officials from trying to inoculate tens of thousands, if not hundreds of thousands, of people anyway. Three vaccine candidates are being injected into workers whom the government considers essential, along with many others, including employees of the pharmaceutical firms themselves.

Officials are laying out plans to give shots to even more people, amounting to a big wager that the vaccines will eventually prove to be safe and effective.

China’s rush has bewildered global experts. Many of the injections appear to be taking place outside the typical drug approval process. The vaccine candidates are in Phase 3 trials, or the late stages of testing, which are mostly being conducted outside China. The people in those trials are closely tracked and monitored. It is not clear that China is taking those steps for everyone who is getting the shots within the country.

The wide use of vaccines also raises issues of consent, especially for employees of Chinese vaccine makers and state-owned companies who might feel pressure to roll up their sleeves. The companies have asked people taking the vaccines to sign a nondisclosure agreement preventing them from talking about it to the news media.

“My worry for the employees of the companies is it may be difficult for them to refuse,” said Dr. Kim Mulholland, a pediatrician at the Murdoch Children’s Research Institute in Melbourne, Australia, who has been involved in the oversight of many vaccine trials, including those for a Covid-19 vaccine.

While China is racing the United States and other countries to develop a vaccine, its rivals are moving more cautiously. American companies have pledged to thoroughly vet a vaccine before wide use, despite pressure from President Trump to go faster. In Russia, the first country to approve a vaccine even before trials were completed, the authorities have yet to administer it to a large population, according to health officials and experts.

It is not clear how many people in China have received coronavirus vaccines. Sinopharm, a Chinese state-owned company with a vaccine candidate in late-stage trials, has said hundreds of thousands of people have received its shots. Sinovac, a Beijing-based company, said more than 10,000 people in Beijing had been injected with its vaccine. Separately, it said nearly all its employees — around 3,000 in total — and their families had taken it.

Hong Kong-based Phoenix Television said this month that its Chinese journalists had been given the Sinopharm vaccine.

Tao Lina, a vaccine expert in Shanghai, said part of the government’s motivation was to “test” the public’s willingness to take a vaccine, laying the groundwork for wider acceptance.

“I think this is our country feeling us out,” said Mr. Tao, a former immunologist at the Shanghai Center for Disease Control and Prevention. “That is to say, even without an epidemic, everyone should consider the possibility of a resurgence and weigh whether they want to get a shot or not.”

The vaccine candidates in Phase 3 trials have been previously tested on smaller groups of people. Phase 3 involves administering a candidate and a placebo to hundreds more, to see whether they are safe to take and effective in stopping the coronavirus. Roughly 100,000 people are involved in those trials, based on Chinese company disclosures. Virtually all of them are in other countries, however, because the coronavirus has been largely tamed in China.

Still, the Chinese government had already approved three vaccines for emergency use on others at home. In July, it said it would prioritize medical workers, epidemic prevention personnel, border inspection officials and people who “ensure basic city operations” to receive vaccines.

Now, it appears that those groups could be expanding.

The mass killings may begin …

It’s so interesting that in this incredible suppressive and manipulating social engineering environment no one even seems to think about ‘blanks’, ‘fake vaccinations’ that do not include any active component, just to get the masses to accept the ‘totally safe’ vaccination. But no one knows what’s in them when they are mass distributed. I am not speaking only about China….. If they do what we see what they do, they certainly are capable of every dirty trick in the old CIA-book….

I will not believe anything that comes out of their mouths. Remember who started all this crap in the first place. Those poor people that lived there may god have mercy on their souls.

Do we know if this Chinese vaccine will be an RNA one like in the West?