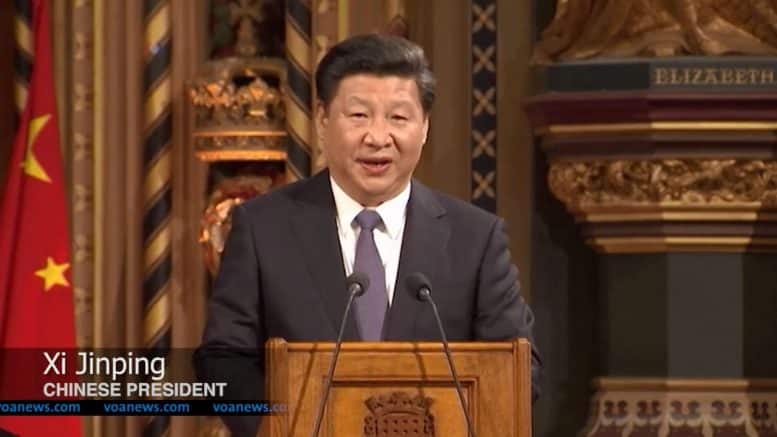 Please Share This Story!
PDF 📄
China intends to conquer the world with authoritarian Technocracy rather than guns and missiles. Thus far, they are excelling and the rest of the world is regressing. There is no give and take in China; it’s their way or the highway. The rest of the world is just starting to figure this out. ⁃ TN Editor

It already seems that the biggest struggle in the 21st century may be between the competing models of Chinese technocratic authoritarianism and Joe Biden’s hopes for a revitalised democratic West. Unless the climate crisis dooms us all, of course.

Since the early days of the American and French revolutions towards the latter part of the 18th century, it has become an increasingly accepted truism globally that their democratic example has been appropriate, valuable, and beneficial to those nations which practise it — and where their citizens live under its logic and structures. US politicians have traditionally boasted that their nation served uniquely as “a light among the nations”. Meanwhile, the French have argued for centuries that their national mission was to carry out a “mission civilisatrice” to the rest of the world — and especially the places it colonised.

A corollary to such statements has been an understanding that expanding democracy’s writ is a particularly worthy, virtuous action. (The Marxist view, of course, was that those deeply embedded, all-encompassing economic forces largely prevented the real expansion of liberties and freedom for the mass of people until the power of those underlying forces were fundamentally broken. That perspective, at least as far as governments are concerned, has now largely been swept away following the end of the Soviet experience.)

While there are deep roots for democracy as a philosophical and political construct that reach back more than two millennia to ancient Greek thinkers and the (albeit limited) experiences of the Athenian polity, as a practical matter, democratic government, even in its rudimentary or partial forms, has been a relative newcomer. It was developed in a world that had long witnessed absolute monarchies, miscellaneous forms of despotism, autocracies, totalitarian dictatorships and expanding empires by the dozens, along with the more troubling intervals of Hobbesian chaos and anarchy in many parts of the world throughout history.

In our present circumstances, rather than any realistic threats of new absolute monarchies or old-style all-encompassing, totalitarian dictatorships arising freshly in democratic nations, there are two real threats to the primacy of the ideal and idea of democracy.

The first is that the threat/challenge/temptation from a seemingly powerful, alternative idea — something increasingly being labelled as Chinese technocratic authoritarianism.

The second comes from within ostensibly already democratic societies and nations that aspire to become such. This threat stems from the increasing intolerance within such societies and by leaders towards some of the basic core ideas a democratic state is based upon.

For the first challenge, the basic argument of its largely Chinese proponents has been based on its apparent efficiency in resource use (and often ignoring externalities) and its effective allocation mechanisms in the delivery of infrastructure, goods, and services to the population, but determined by a small ruling elite. This success, therefore, comes at a price. There is little of the citizenry’s engagement in the process of determining who actually makes these major decisions, or who actually gets to determine all those outcomes.

Nevertheless, advocates of this system argue that their undeniable success in lifting many millions out of the abject poverty that had been the lot of the majority of Chinese for thousands of years is, effectively, the self-evident proof of it being a recipe for one great-tasting pudding. Their effectiveness, for example, in building a vast, ultra-fast rail network reaching virtually every major city throughout China in record time becomes a self-evident proof that this fusion of technocracy and authoritarianism works best for the present — and the future. And for everyone. QED.

For proponents, none of that outdated, selfish nonsense about all those formal, Western-style civil rights, the rights of minorities, or the right for all to have a real voice in the choosing of rulers that just stand in the way of constructing a world-leading nation. It may not be all that new an approach. In fact, it actually appropriates much from modern, Western-style capitalism, as well as from the technocracy movement that was popular in the 1930s.

That social movement essentially advocated replacing all those confusing, bickering politicians and selfish businesspeople with scientists and engineers who had the technical expertise to appropriately manage the economy best, with the best of all possible solutions to problems. By now, of course, there is very little being drawn from the Marxism that their technocratic-authoritarian state’s leaders ostensibly say it is firmly grounded in.

Not surprisingly, for the Chinese and their acolytes elsewhere, this technocratic authoritarianism is the wave of the future. Moreover, promoting it has become a hallmark of a new, increasingly assertive, self-assured Chinese diplomacy — something very different from the behaviour of the old China on the world stage.

Chinese representatives now freely chastise Western nations over their sanctimoniousness regarding China’s domestic affairs, but especially direct their criticisms towards the US for being on the path towards becoming a failing, flailing state, increasingly ill-equipped to deal with the manifold challenges of the present and the future. Moreover, in that view, the US is now fatally compromised by the lack of any overarching national social cohesion and far too much individualism, traits that inevitably lead to bureaucratic incoherence and state failure.