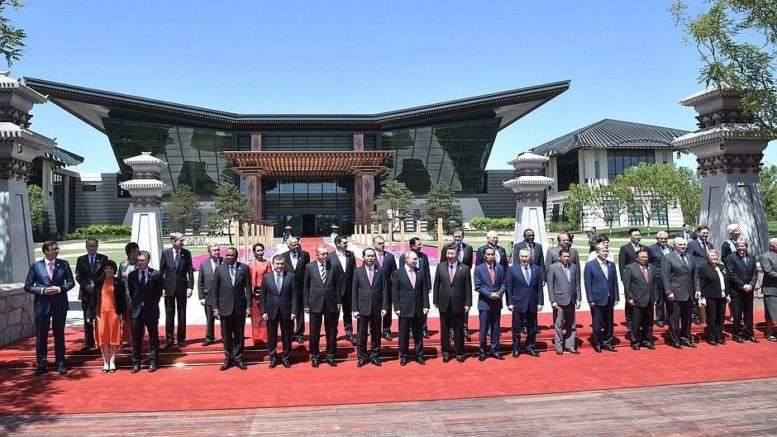 Please Share This Story!
PDF 📄
As a Technocracy, China is driven to create infrastructure and develop the global supply chain, both of which are central to its Belt and Road initiative. Europe is playing both sides of the fence with America on one hand, and China on the other. ⁃ TN Editor

The multipolar transformation that is occurring across the Eurasian continent confirms the industrial and diplomatic cooperation between China and the European continent in spite of strong opposition from the United States.

Xi Jinping’s visit to Europe confirms what many of us have been writing about over the past few months and years, namely, the reality of an ongoing global transformation of a world dominated by the United States to a pluralistic one composed of different powers collectively shaping a multipolar world.

Europe therefore finds itself in fortuitous position, balanced as it is between its old world links to the United States on the one side and the fledgling Eurasian one being ushered in by Russia and China on the other.

Countries like Germany and France, but even the United Kingdom, have long implemented commercial policies that encourage integration between the countries of the Eurasian supercontinent. In 2015, the United Kingdom was among the first Western countries to join the Chinese Asian Infrastructure Investment Bank (AIIB), which finances projects of the Belt and Road Initiative (BRI).

The Chinese BRI mega project kicked off in 2014 with the ambitious goal of integrating trade between China and Europe by sea and by land, in the process incorporating all the countries in between. The idea, as a natural consolidation of trade, is to shorten the delivery times of goods by rail and integrate sea routes. The project covers not only ports and rail lines but also the construction of technological infrastructure to achieve global interconnectivity using the 5G technology developed by the Chinese tech giant Huawei.

Germany and France have over the years deepened their partnerships with Beijing. Paris in particular boasts historical ties with China stemming from the nuclear cooperation between China General Nuclear Power Group (CGNPC) and Électricité de France (EDF) stretching back to 1978, as well as the aerospace one between Airbus and the Chinese aviation companies that has been ongoing since 1985.

Italy has in recent months approached the BRI as a result of the new government consisting of the Lega Nord and Five Star Movement (M5S). The decision to sign a memorandum of understanding between Beijing and Rome underlines how the new government wants to maintain a balanced position between Washington and Beijing in certain sectors. This is exactly the approach of Germany, which has elected to continue deepening its ties with Moscow vis-a-vis hydrocarbons and Nord Stream 2 in the face of pressure from Washington. Moreover, both Germany and Italy have confirmed that they want to rely on Huawei for the implementation and management of 5G traffic, which is fundamental to a world dominated by the internet of things.

The decisions of Germany, France and Italy to continue their cooperation with Moscow and Beijing in various fields flies in the face of the narrative advanced by the American-controlled scaremongering media controlled that attempts to discourage European politicians from acting in the interests of their countries and engaging with Russia and China.