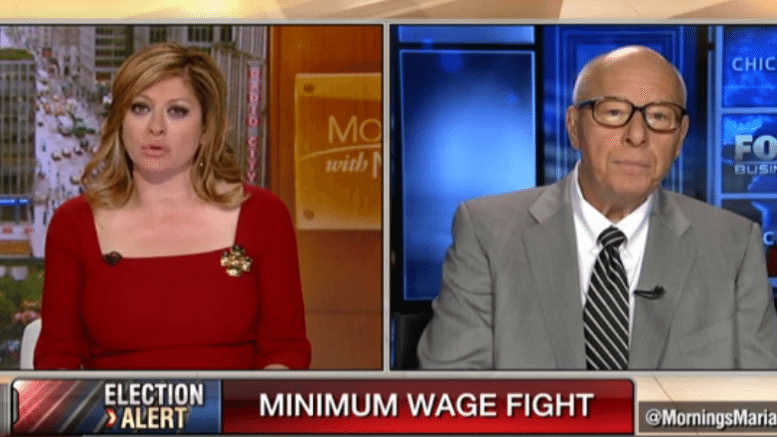 TN Note: Rensi’s take-a-way quote: “it’s very destructive and it’s inflationary and it’s going to cause a job loss across this country like you’re not going to believe.”  Technocracy marches on and promises to dislodge millions from the job market with robotics and AI.

As fast-food workers across the country vie for $15 per hour wages, many business owners have already begun to take humans out of the picture.

“I was at the National Restaurant Show yesterday and if you look at the robotic devices that are coming into the restaurant industry — it’s cheaper to buy a $35,000 robotic arm than it is to hire an employee who’s inefficient making $15 an hour bagging French fries — it’s nonsense and it’s very destructive and it’s inflationary and it’s going to cause a job loss across this country like you’re not going to believe,” said former McDonald’s (MCD) USA CEO Ed Rensi during an interview on the FOX Business Network’s Mornings with Maria.

According to the Bureau of Labor Statistics, 1.3 million people earned the current minimum wage of $7.25 per hour with about 1.7 million having wages below the federal minimum in 2014. These three million workers combined made up 3.9 percent of all hourly paid workers.

“It’s not just going to be in the fast food business. Franchising is the best business model in the United States. It’s dependent on people that have low job skills that have to grow. Well if you can’t get people a reasonable wage, you’re going to get machines to do the work. It’s just common sense. It’s going to happen whether you like it or not. And the more you push this it’s going to happen faster,” Rensi added.

Dōmo arigatō, Mr. Roboto? In time AI/robotics will end entry level service industry jobs and hopefully bring us back to $.99 unhealthy meals. The 4th wave is coming and it will be the worst impact to the workers yet. In theory as advances in technology occur man’s life improves. In practice most of the people that can’t adapt suffer and wealth increasingly concentrates in the hands of fewer and fewer people. The fewer people do not share their wealth and income inequity grows. Very soon this place will look something like Elysium only Matt Damon (or whoever) will not be… Read more »