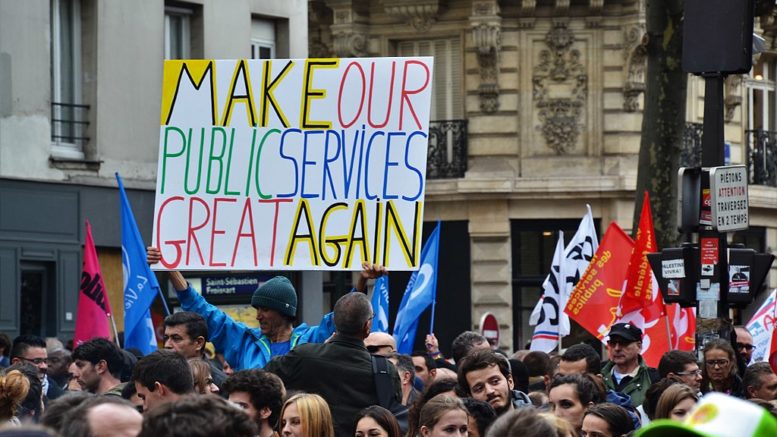 Please Share This Story!
PDF 📄
French protestors are ripping France’s oppressive carbon-based tax, and intend to topple the French president altogether. This is evidence of a world-wide movement that is totally fed up with global warming fraud and political chicanery. ⁃ TN Editor

The single most effective weapon in the fight against climate change is the tax code – imposing costs on those who emit greenhouse gases, economists say. But as French President Emmanuel Macron learned over the past three weeks, implementing such taxes can be politically explosive.

On Tuesday, France delayed for six months a plan to raise already steep taxes on diesel fuel by 24 cents a gallon and gasoline by about 12 cents a gallon. Macron argued that the taxes were needed to curb climate change by weaning motorists off petroleum products, but violent demonstrations in the streets of Paris and other French cities forced him to backtrack – at least for now.

“No tax is worth putting in danger the unity of the nation,” said Prime Minister Édouard Philippe, who was trotted out to announce the concession.

It was a setback for the French president, who has been trying to carry the torch of climate action in the wake of the Paris accords of December 2015. “When we talk about the actions of the nation in response to the challenges of climate change, we have to say that we have done little,” he said last week.

Macron is hardly alone in his frustration. Leaders in the United States, Canada, Australia and elsewhere have found their carbon pricing efforts running into fierce opposition. But the French reversal was particularly disheartening for climate-policy experts, because it came just as delegates from around the world were gathering in Katowice, Poland, for a major conference designed to advance climate measures.

“Like everywhere else, the question in France is how to find a way of combining ecology and equality,” said Bruno Cautrès, a researcher at the Paris Institute of Political Studies. “Citizens mostly see punitive public policies when it comes to the environment: taxes, more taxes and more taxes after that. No one has the solution, and we can only see the disaster that’s just occurred in France on this question.”

“Higher taxes on energy have always been a hard sell, politically,” said Gregory Mankiw, an economics professor at Harvard University and advocate of carbon taxes. “The members of the American Economic Association are convinced of their virtue. But the median citizen is not.”

In the United States – where energy-related taxes are among the lowest in the developed world – politicians, their constituents and their donors have repeatedly made that clear.

President Bill Clinton proposed a tax on the heat content of fuels as part of his first budget in 1993. Known as the BTU tax, for British thermal unit, it would have raised $70 billion over five years while increasing gasoline prices no more than 7.5 cents a gallon.

But Clinton was forced to retreat in the face of a rebellion in his own party. “I’m not going to vote for a BTU tax in committee or on the floor, ever, anywhere. Period. Exclamation point,” said then-Sen. David Boren, D-Okla.

The state of Washington has also tried – and failed twice – to win support for a carbon tax or carbon “fee.” In 2016, the state’s voters rejected a ballot initiative that would have balanced a carbon tax with other tax cuts. In 2018, a wider coalition sought backing for an initiative that would have poured fee revenue into clean energy projects, job retraining and early retirement plans for affected workers. The fee would have started at $15 a ton and gone up $2 a ton for 10 years. It, too, failed.

To be sure, some climate-conscious countries have adopted carbon taxes, including Chile, Spain, Ukraine, Ireland and nations in Scandinavia. Others have adopted cap-and-trade programs that effectively put prices on carbon emissions.

Only around 12 percent of global emissions are covered by pricing programs such as taxes on the carbon content of fossil fuels or permit trading programs that put a price on emissions, according to the International Monetary Fund.

Policy experts say that to some extent the prospects of carbon taxes may depend on what happens to the money raised.

Using the revenue for deficit reduction, as was planned in France, is a no-no.

“Even in the best of times, carbon taxes must be carefully crafted to avoid political pitfalls,” said Paul Bledsoe, a former Senate Finance Committee staffer and Clinton White House climate adviser. “In particular, much of the revenue raised must be recycled back to middle-income workers. Macron’s approach put the money toward deficit reduction, stoking already simmering class grievances.”

Last year, a group of economists and policy experts – including former treasury secretaries James Baker III and Lawrence Summers and former secretary of state George Shultz – advocated a tax-and-dividend approach. It would feature a carbon tax of $40 a ton, affecting coal, oil and natural gas. The revenue would be used to pay dividends to households. Progressive tax rates would mean more money for lower- and middle-income earners.

“Because the revenue is rebated equally to everyone, most people will get more back than they pay in carbon taxes,” said Mankiw, who is part of the group. “So if people understood the plan, and believed it would be carried out as written, it should be politically popular.”

So far the group, called the Climate Leadership Council, has not been able to generate much support from members of Congress.

But Canada is about to offer a test case.

Prime Minister Justin Trudeau has unveiled a “backstop” carbon tax of $20 a ton, to take effect in January, for the four Canadian provinces that do not already have one.

Trudeau was elected partly on a promise of this sort of measure, but it’s costing him more political capital than expected. Conservative premiers oppose the plan, which looks set to become an election issue.

Trudeau’s policy, however, is designed to withstand criticism. About 90 percent of the revenue from the backstop tax will be paid back to Canadians in the form of annual “climate action incentive” payments. Because of the progressive tax rates, about 70 percent of Canadians will get back more than they paid. If they choose to be more energy efficient, they could save even more money.

The first checks will arrive shortly before Canadian elections.

Climate policy doesn’t only suffer from lack of enthusiasm. It also arouses the ire of right-wing populist movements.

Many of the people most angry at Macron’s tax come from right-wing rural areas. The German right-wing opposition party Alternative for Germany has called climate change a hoax. And in Brazil, a new populist president had indicated he will develop, not preserve, the Amazon forests that pull CO2 out of the air and pump out oxygen.

President Donald Trump, who has said he does not believe climate science, also took to Twitter to say Macron’s setback showed Trump was right to spurn the Paris climate agreement.

“I am glad that my friend @EmmanuelMacron and the protestors in Paris have agreed with the conclusion I reached two years ago. The Paris Agreement is fatally flawed because it raises the price of energy for responsible countries while whitewashing some of the worst polluters in the world,” he wrote. “American taxpayers – and American workers – shouldn’t pay to clean up others countries’ pollution.”

Fuel taxes, however, generate revenue that stays inside home countries without going to pay for others’ pollution. And the Paris agreement placed much greater responsibilities on developing countries than ever before.

A member of Trump’s beachhead transition team at the Energy Department also took to Twitter to celebrate the collapse of Macron’s fuel tax plan.