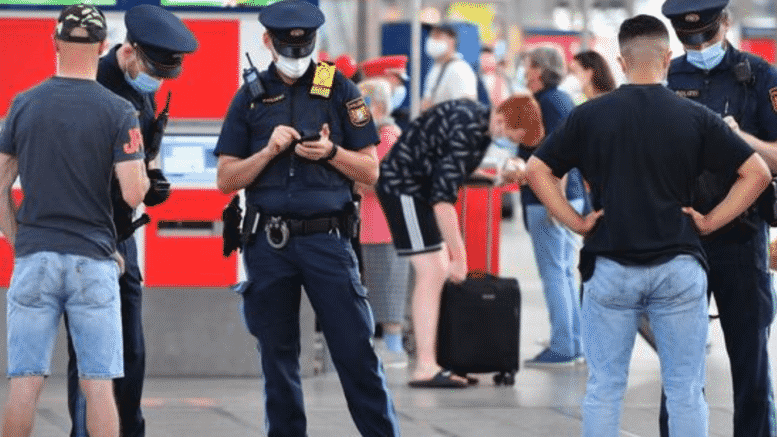 A uniform nationwide fine of at least €50 will be slapped on people who don’t wear a mask when it’s obligatory, a government draft agreement states.

That’s according to a draft plan put together by the government ahead of a meeting with Chancellor Angela Merkel and state premiers on Thursday.

In view of the increasing number of new coronavirus infections, Merkel, of the centre-right Christian Democrats (CDU), wants to tighten measures to stop the spread of Covid-19 in Germany.

The new regulations, set to be approved later in the day, will apply nationwide and include a minimum fine of €50 for people who don’t wear a mask when they are required to.

As part of the measures to stall the spread of the virus, people in Germany must wear a covering over their face and mouth when riding on public transport and in certain closed areas such as shops.

However, states have differed hugely on how they deal with people who flout rules. Some states have been imposing strict checks and fines, while others have chosen not to.

Penalties have varied wildly, from €40 in Hamburg to €250 in Bavaria.

Meanwhile, the western state of North Rhine-Westphalia decided earlier in August that those caught without a mask on public transport face paying an on-the-spot fine of €150.

Earlier in the summer, the Berlin public transport service, Berliner Verkehrsbetriebe (BVG), said their staff had spotted around 30,000 violations of the mask rules in three weeks.

The mask obligation (Maskenpflicht) has also proved controversial, with some people saying the rules on wearing face coverings should be loosened to encourage more people to go shopping to support businesses.

A poll by The Local Germany showed huge support for face coverings during the crisis, with 89 percent of readers on our Facebook page supporting the measure.

For the first time since June, state premiers of the federal states are discussing the coronavirus strategy in Germany with Merkel.

The draft agreement states that large events will be banned until December 31st, private parties should be limited to 25 people and free coronavirus tests for people returning to Germany from non-risk areas will be abolished after summer.

“Meanwhile, the western state of North Rhine-Westphalia decided earlier in August that those caught without a mask on public transport face paying an on-the-spot fine of €150.”
Yes, but I live in Cologne, which while not the State capital is the most prominent city in NRW, and my feeling is that like petty motoring offences it’s just another excuse to milk the public. Someone ought to challenge the ridiculously inflated figure in the courts; I’m too poor.

Luckily, and happily, it’s nice to know that, at least, there’s a great number (hopefully, possibly, lol), enough citizens of that great and beautifully country to….as Michael Jackson sang….MAKE THAT CHANGE!
I spent two years over there, with the Army, about 15 years ago, and still recall the beauty of that land. And soooo, from this same educational and groovy website, we have the REST of the story (or we can surely wish…)

Oh chit, I’d be racking up the tickets today, lol 😂. Spent all day going from shop to shop getting my hair cut and eating inside a restaurant all without donning the face diaper! Amazingly folks were nice and I got no grief from anyone. What did sadden me as I did not see one other person out there unmasked, are people really this stupid? Boi are we in trouble. Todays Sheeple need to get a backbone or grow a pair as the guys would say and stand up to this tyranny and just say NO! I have an immune… Read more »

That’s because they’re Nazis!! WHY is it that pretty much NO ONE wants to talk about the FACT that The Nazi Party NEVER SURRENDERED at the end of WW II?!?!?!?!?! They’ve LIVED ON since then. I don’t remember the exact number (10, 20 30,0000), but an enormous number came to the US (and UK and some went to the Soviet Union). It was called ‘Operation Paperclip’ and people SHOULD KNOW THIS! They went to (IN CHARGE of) NASA, our school’s & colleges, in to other parts of our GOVERNMENT, the CIA & FBI, in to our Mega Corps (Boeing, Lockheed… Read more »

I don’t know what the supposed differences are. I consider fascists, communists, marxists, nazis and socialists as being a part of one big devilish family. I guess you could label those systems as political witchcraft cults. The devil is the god of those systems and the people who practice and impose that satanism on others.

https://haveyenotread.com/occult-ritual-transformation-and-coronavirus/ I thought this was an interesting article my friend send. Yes, I believe it! Where I live they promote witchcraft widely. The lady at the meat department has 2 pentagrams one on each forearm. The local news paper is promoting ‘art magic’. The dog grooming lady wears one around her neck. The lady who runs the sporting goods store practices harry potter rituals with her grandchildren. I know a lady who has grand children who are looking for crystals among the rocks to practice witchcraft with and most of the trinket stores sell spell books and voodoo dolls for… Read more »

I don’t get it. We were told the lie that the masks were going to stop the spread of covid19. The last time I looked on the CDC and the OSHA websites. It was stated that masks don’t stop the spread of CV19! Some of us already knew that a healthy immune is the best defense against virus and disease. And after 4 plus months of mandated mask wearing. I’m still hearing about a continual rise of covid19 cases. Since vaccines and a health immunity passport (covid pass) was the goal. I don’t understand the point of mandatory mask wearing… Read more »