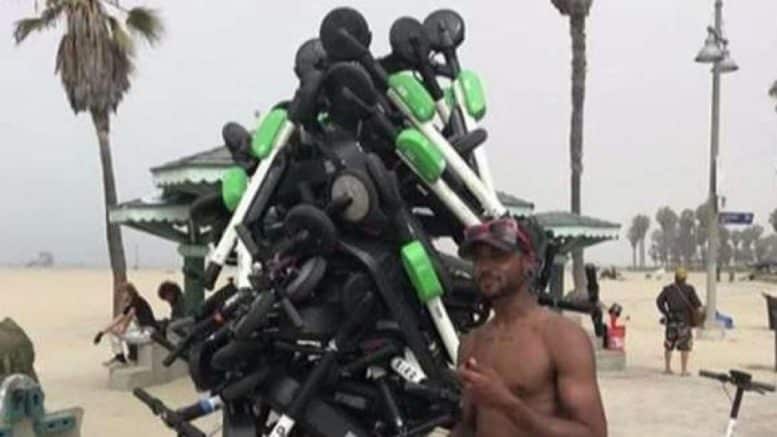 Please Share This Story!
PDF 📄
E-scooters were promoted as a holy grail for sustainable living in cities, cutting down on carbon-guzzling cars and providing recreation for all. Now, pedestrians just about everywhere loathe E-Scooters and want them dumped. ⁃ TN Editor

Singapore became the latest city to target electronic scooters on Tuesday, when a ban on riding the devices loved by commuters but loathed by pedestrians took effect.

E-scooters have become a common sight on city streets from Berlin to Paris, but they have been blamed for accidents including the death of an elderly lady in Singapore this year.

Anyone riding an e-scooter on the city’s sidewalks now faces up to three months in jail or a fine.

Here are five other countries that have restricted or banned e-scooters.

Paris has banned e-scooters from sidewalks, with offenders facing a fine of 135 euros ($150).

A speed limit of 20km (12 miles) an hour has been imposed on the motorized vehicles across the capital, where scores of people have been injured and a man in his 80s was killed in April.

German lawmakers voted in May to legalize e-scooters on roads and cycling paths but ban them from sidewalks. Riders must be aged 14 and above, and comply with a 20 km per hour speed limit.

Last year Madrid banned e-scooters from pedestrian areas and from roads with speed limits of 50 km an hour or more.

It is illegal to ride e-scooters on public roads, cycle lanes and pavements and offenders can face a fine of £300 ($387), although there have been recent calls for the ban to be lifted.

Some cities have imposed restrictions on e-scooters and a study in September found they were involved in a rising number of injuries, often involving young men who are drunk or stoned.

I’ve said it before–cyclists whether on a bike or scooter will not typical act responsibly toward pedestrians when they are straight, let alone young men who are drunk and/or stoned. It’s not a good combination for foot traffic and motorized vehicles to be funneled onto the same avenues. Motorized vehicle riders are simply not trustworthy.

However, city planners/promoters of such concepts appear to be deaf and dumb when it’s just good common sense not to mix them. DUH.