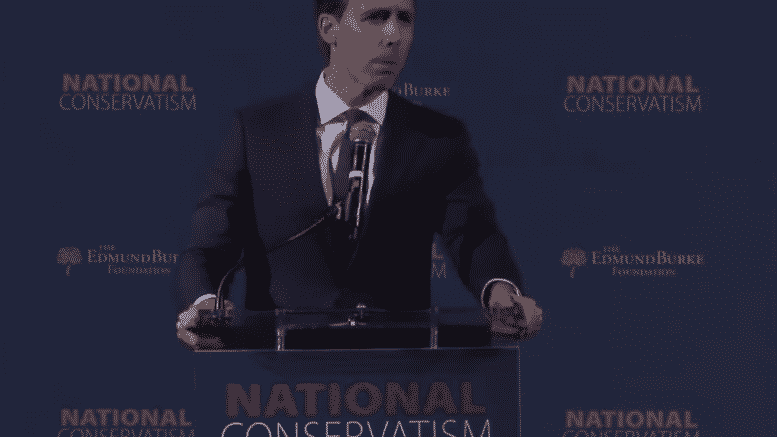 Please Share This Story!
PDF 📄
Sen. Hawley has correctly nailed the big picture, except to name those who created weaponized globalization in the first place. TN readers can start with The Trilateral Commission and its New International Economic Order. ⁃ TN Editor

The ruling class’s consensus in support of globalizing the American economy is working “quite well” for its architects, the “cosmopolitan class,” while leaving behind the “great American middle,” Sen. Josh Hawley (R-MO) says.

During his keynote address at the National Conservatism Conference, Hawley slammed what he called the “political consensus that reflects the interests not of the American middle, but of a powerful upper class and their cosmopolitan priorities” that has been supported by both Republicans and Democrats for decades.

The goal of the “cosmopolitan class,” Hawley says, is mass globalization, not only of the American economy but of the American way of life, with efforts for “closer and closer economic union, more immigration … more trade on whatever terms” to blur the “boundaries between America and the rest of the world” and eliminate land and economic borders.

“Call it the cosmopolitan consensus,” Hawley said of the ruling class’s globalist priorities.

The goal is to build a global consumer economy, one that will provide an endless supply of cheap goods, most of them made with cheap labor overseas, and funded by American dollars. [Emphasis added]

But it’s about more than economics. According to the cosmopolitan consensus, globalization is a moral imperative. That’s because our elites distrust patriotism and dislike the common culture left to us by our forbearers. [Emphasis added]

The cosmopolitan elite look down on the common affections that once bound this nation together: things like place and national feeling and religious faith. They regard our inherited traditions as oppressive and our shared institutions—like family and neighborhood and church—as backwards. [Emphasis added]

The cultural and economic model that has been foisted on American citizens by the ruling “aristocracy,” Hawley said, is one entrenched in “a progressive agenda of social liberation in tune with the priorities of their wealthy” counterparts around the globe.

This “cosmopolitan economy” and culture has “worked quite well” for the ruling elite, but has left the American middle class behind with economic and social destruction, according to Hawley.

“Whom it has not served are the people whose labor sustains this nation,” Hawley said. “Whom it has not helped are the citizens whose sacrifices protect our republic. Whom it has not benefited is the great American middle. Because in this bargain, foreign competitors get to make the goods, and we just buy them. And then they buy up American companies with the profits.”

“And yes, in this bargain there are lots of jobs—jobs on Wall Street, or in Hollywood, or in Silicon Valley,” Hawley continued. “Because the truth is, the cosmopolitan economy has made the cosmopolitan class an aristocracy. At the same time, it has encouraged multinational corporations to move jobs and assets overseas to chase the cheapest wages and pay the lowest taxes.”

This, Hawley said, has left middle America with “flat wages, with lost jobs, with declining investment and declining opportunity” that has translated into a social crisis for the working class, declining rates of marriage, declining birth rates, falling life expectancy, as well as an opioid and drug addiction epidemic.

Is it any surprise that in the last half-century, as our leaders have pursued a program the American middle does not espouse, does not support, and does not benefit from, that public confidence in American government has collapsed? Is it any wonder that American voters regularly tells pollsters they feel unheard, disempowered and disrespected? [Emphasis added]

Because who now listens to the American middle? The cosmopolitan agenda has driven both Left and Right. The Left champions multiculturalism and degrades our common identity. The Right celebrates hyper-globalization and promises that the market will make everything right in the end, eventually … perhaps. [Emphasis added]

A comprehensive survey by Pew Research Center released in March reveals an overwhelming divide between the country’s working and middle class and the ruling class, as well as their allies in the donor class.

About 73 percent of Americans said the gap between the rich and poor will continue to grow, a plurality of nearly 40 percent said the country will be weakened culturally due to a growing multicultural population, 44 percent said the standard of living for Americans by 2050 will be worse than today’s standard, nearly half of the working class said automation will take their jobs in the future, and majorities across economic groups said the lower class is likely to increase and the middle class is set to decrease.

This Senator like all the rest has shown his special talent for being hoodwinked. Globalization is the globalization of poverty of the masses. It is the inventory and control of all assets on the planet including every human. “They hate us for our freedoms” is quite true. It is just that the ‘they’ was never defined as the globalists and their sycophants in govt. and heading all its agencies. The wonder is in how well they have put the people to sleep while they rob them blind enough to leave them all in the poor house.

The GOP passed NAFTA and GATT and that killed off US manufacturing and thus the middle class and the GOP was a major partner in this destruction. This was all perfectly predictable and was predicted by James Goldsmith and you can hear his warnings that predicted this catastrophe in this video.
https://www.youtube.com/watch?v=4PQrz8F0dBI