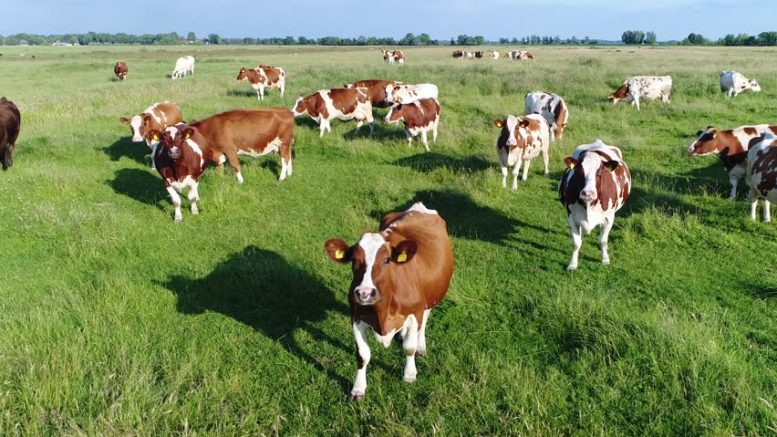 Please Share This Story!
PDF 📄
In a panic to cut CO2 emissions, demands are being made to end factory farming and shut down large scale animal operations like feed lots. There are strong overtones of radical veganism and vegetarianism in this movement. ⁃ TN Editor

This week, a petition signed by more than 100,000 people was delivered to Congress, outlining issues that should be addressed in Representative Alexandria Ocasio-Cortez (D-NY) and Senator Ed Markey’s (D-MA) Green New Deal. This petition shows overwhelming support for the Green New Deal, and calls for more attention to be brought to how our food system can be reformed to combat climate change. With the food and farming sector being the United States’ largest employer, and the country being one of the highest contributors toward climate change, citizens are calling for action to be taken to protect our world.

As someone in their mid-twenties, I have grown up seeing how climate change is actively impacting me and my community. Here in California, I expect droughts in the summer and extreme wildfires or mudslides in the fall; learning from a young age to always conserve water because the next shortage is just around the corner. Young activists from all across the U.S. have seen similar changes in their home states, and we recognize that our future depends on action being taken to stop the climate crisis before it is too late.

A unique opportunity to address climate change can be found in our agriculture sector—an area which must be made sustainable if we’re going to survive. Climate scientists have identified agriculture as one of the largest contributors to climate change. This an opportunity to shift agricultural practices away from the large scale, conventional farms that currently dominate our food system to a regenerative, locally-focused, small-scale system that values the welfare of the land and those who work it. CFS has identified several focus points that should be implemented with the passing of the GND resolution to cut back greenhouse gas emissions and create a healthier, more sustainable food system.

The future of agriculture lies in the shifting of practices away from large scale monocultures towards small and medium-sized diversified farms. We must wean away from the mass amounts of toxic chemical pesticides and fertilizers being used, and instead integrate regenerative practices such as cover cropping, the use of compost, and the implementation of hedgerows as alternatives that not only add nutrients into the soil, but provide many other ecosystem services. Among these, regenerative agriculture protects biodiversity, including the native bees and pollinators that are currently being decimated by conventional agriculture. Our “Regenerating Paradise” video series covers many practices currently being practiced in Hawai’i—including several that can be implemented nationwide—to reduce carbon emissions and protect our soils. Implementing these practices can sustain our food production all while sequestering carbon, protecting pollinators, and promoting on-farm biodiversity.

Switching to these regenerative agriculture practices will not be easy, but it will be beneficial. Despite research showing the vast benefits that come from cover cropping and other regenerative practices, farmers have been slow to start implementing them. Government and university grants, technical assistance, and further research should be funded to help promote these practices, transition farms, and aid the continuous education of farmers and farmworkers. This investment will have far-reaching effects on farms—preserving native pollinator habitat, sequestering carbon, and providing climate-smart food to local communities.

Disinvestment from factory farms is necessary, not only from a climate standpoint, but from a larger human and environmental health perspective as well. Large scale animal operations pollute the water, lead to a higher risk of disease in humans, and contributelarge amounts of methane and other greenhouse gases into the air. Cutting back meat consumption, purchasing meat from local sources, and shifting toward plant-based sources of protein are all ways that individuals can help. More people than ever, especially young people, have recognized the harmful impacts of meat consumption and we are turning toward a flexitarian diet, vegetarianism, and veganism as a way to cut back on our carbon footprint. The government has the opportunity to support this effort on a larger scale by providing financial support and technical assistance to ranchers to help them transition to pasture-based and integrated livestock operations that reduce livestock’s impact on climate change and help sequester carbon in the soil.

CFS’s recently launched EndIndustrialMeat.org, a website that highlights some of the negative impacts that come with factory farming, including the vast amount of carbon released into the air and heavy metals being drained into the ground; serious consequences that disproportionately affect rural populations and disadvantaged communities. The GND’s goal to secure clean air and water, healthy food, and a sustainable environment for all communities mean that shutting down these harmful operations is imperative.

3. Reverse the trend of consolidation within the agriculture sector

For decades now, there has been increasing consolidation of seed, livestock, and other agriculture-related companies. These mega-corporations have purchased vast quantities of land and set the rules for how a farm has to run, undercutting disadvantaged farmers and farmworkers, and wrecking rural communities. GND policies can be used to break up these mega-farms, and empower local communities to take back the food system. Breaking up these predatory mega-farms would not only reinvigorate the economies of rural areas, but it would also give these communities access to the healthy, climate-friendly food necessary to slow the rate of climate change.

The growth of small and medium-sized farms would allow farmers and farmworkers to set fair wages and provide safe and humane conditions for themselves and a future for their children. Doing so would not only allow current farmers to continue their operations, but also would open the door for young farmers to have access to the land, resources, and funds needed to operate for a viable, sustainable farm.

“NOW the Spirit speaketh expressly, that in the latter times some shall depart from the faith, giving heed to seducing spirits, and doctrines of devils; Speaking lies in hypocrisy; having their conscience seared with a hot iron; Forbidding to marry, and commanding to abstain from meats, which God hath created to be received with thanksgiving of them which believe and know the truth. For every creature of God is good, and nothing to be refused, if it be received with thanksgiving.” 1 Timothy 4:1-4.