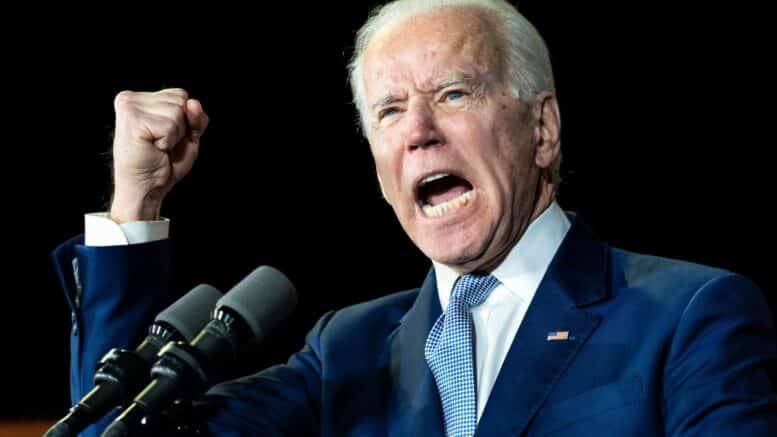 Posted By: Joy Pullman via The Federalist October 13, 2021

Please Share This Story!
PDF 📄
Since the Great Panic of 2020 began, America has been ruled by executive orders and CDC guidelines. Now it is being ruled by a press release. The nation’s businesses and governments have been thrown upside down over vaccine mandates that never materialized and have zero basis in law. By any other definition, this is perilously close to an outright scientific dictatorship. ⁃ TN Editor

Yes, we’ve heard all about Joe Biden’s alleged vaccine mandate for private companies employing 100 or more people. It was all over the news even before he announced it on September 9. His announcement has jeopardized the employment of millions of Americans and increased worker shortages in critical domains such as health care.

There’s only one problem. It’s all a mirage. Biden’s so-called vaccine mandate doesn’t exist — at least, not yet. So far, all we have is his press conference and other such made-for-media huff-puffing. No such rule even claiming to be legally binding has been issued yet.

That’s why nearly two dozen Republican attorneys general who have publicly voiced their opposition to the clearly unconstitutional and illegal mandate haven’t yet filed suit against it, the Office of the Indiana Attorney General confirmed for me. There is no mandate to haul into court. And that may be part of the plan.

According to several sources, so far it appears no such mandate has been sent to the White House’s Office of Information and Regulatory Affairs yet for approval. The White House, the Occupational Safety and Health Administration (OSHA), and the Department of Labor haven’t released any official guidance for the alleged mandate. There is no executive order. There’s nothing but press statements.

Despite what you may have been falsely led to believe by the media fantasy projection machine, press statements have exactly zero legal authority.

“There is nothing there yet that gives employers any mandate,” Stephanie McFarland, spokeswoman for the Indiana Occupational Safety and Health Administration, told me Oct. 6. “The president made an announcement on this asking OSHA to do it, but we’ve not yet seen anything come from it yet,” she also said. When the state agency gets any further information, she said, they’ll review it.+

To impose the public perception of a mandate, the Biden administration is following an unusual rule-making process it also employed earlier this year, called an emergency temporary standard (ETS). The spring ETS rule took nearly six months to issue. Meanwhile, companies are telling reporters their vaccine mandates will have at the latest December deadlines. (For those who can’t calendar, that’s four months after Biden’s non-existent mandate was proclaimed. According to OSHA, an ETS takes up to six months to go into effect after the initial mandate is issued in the Federal Register — which, again, for the proclaimed 100-employee mandate hasn’t happened yet.)

Lawyers for big business were blunt about their love for this mandate mirage: “Everybody loves this cover,” Minneapolis employment lawyer Kate Bischoff told Bloomberg Law in September. “Many were already looking down the road at doing this, but the fact that they get to blame Biden is like manna from heaven.”

Using the ETS procedure instead of normal federal rule-making processes both allows the Biden administration to push its demands faster and without any public input or requirement of responding to public input, which is normally required of even legally laughable federal rule-making like this one would be. That is part of why ETS rules have been overwhelmingly overturned in courts.

“OSHA has used that legal authority only 10 times in 50 years,” David Rivkin Jr. and Robert Alt wrote in the Wall Street Journal in September. “Courts have decided challenges to six of those standards, nixing five and upholding only one.”

There are many other reasons any federal vaccine mandate would be obviously illegal and unconstitutional, Rivkin and Alt write, including that “The states have plenary police power to regulate health and safety. Congress has only those limited powers enumerated in the Constitution. That wouldn’t include the authority to impose a $155 fine (today’s equivalent of the $5 at stake in Jacobson) on an individual who declines to be vaccinated, much less to prevent him from earning a livelihood.”

But who needs the Constitution when you have an American people conditioned for compliance with even wildly outlandish things the screen people insist they must think and do?

Earlier this week, the Wall Street Journal published a letter from Bruce Atkinson making several excellent observations about the nonexistent mandate, including the following:

The mandate’s nonexistence shields the Biden administration from legal challenges that may ultimately restrict the Occupational Safety and Health Administration’s authority. Yet the mandate is still effective at compelling industries and companies into compliance, as it leaves room for any eventual issuance to target noncompliant entities. This implied cudgel is particularly effective on industries and companies that are dependent on federal spending or the goodwill of federal regulators. The nonexistent mandate also allows so-inclined state and local governments and companies to issue their own mandates, seemingly in lockstep with Washington.

The Biden White House has been well-served by presenting a nonexistent mandate as a done deal.

Now, let me see, what presidential administration does all this remind you of? Why, that of Mr. “Pen and Phone” himself, Barack Obama.

His also wildly unconstitutional Deferred Action for Child Arrivals was simply a two-page memo, for example, but it is still allowing some 616,000 people to simply ignore major U.S. laws, and could easily be reinstated by courts as litigation continues nearly a decade later. It seems that, given such unchecked gains from openly lawless actions Democrats have turned into standard operating procedure over the years, Joe Biden feels free to reduce that constitutional contempt to simply a phone now.

Legal or not. Doesn’t matter.
My line is drawn.

It says this rule has not been published. They don’t want us to know what the rule is.

Seems to me that businesses (local, state, federal or private) would have investigated to be sure that Biden’s mandate was more than a verbal one before implementing it. Seems to me many companies were eager to blackmail people into getting jabbed anyway.

There may be financial kickbacks or tax breaks available for those morons. As for those companies who go along with the covid jab insanity. May they crash and burn. Some of them wouldn’t be missed if they closed up shop tomorrow. The hospital killing machines deserve financial collapse too.

Sorry but this is a flim flam. The Biden administration knew of this. This is a cover story to take heat off of Biden and I don’t believe it for a nanosecond. If it was not true that it came from the desperate White House, it would have been debunked when the media told the lie and not several days later. Even if it is true, why did it take so long for tthe White House to say anything about it?

Like I wrote earlier. NO MANDATE HAS BEEN FILED. THE BIDEN ADMINISTRATION IS/HAS BEEN BLUFFING its way through while increasing their threatening language via the masters’ Totalitarian FakeSM propaganda machine which runs a 24/7 FEAR GAME on the ‘mass formed’ public. This is what happens when business owners believe lies told as truth. AND is the central reason employees were told to make the employer fire you! AMERICAN BUSINESS OWNERS COMPLIED OUT OF FEAR and SUPIDITY rather than a bit of intelligent research into the ACTUAL FACTS. It appears they can no longer tell the difference between reality and a… Read more »

My husband’s company is one of those enforcing the mandate here in Texas. They are ignoring Gov. Abbott’s executive order, and proudly proclaiming such. This company is a partner of the WEF. They are one of the largest military contractors in the world. Amazingly, they are willing to lose up to 1/4th or 1/3rd of their workforce (here in our part of Texas) by December 8th. This is very perplexing, as their employees are all highly specialized in their individual knowledge. They all also have security clearances. A company does not easily replace such employees. So, why are they complicit… Read more »

Take look at Deagel forecast for USA 2025 reduction of 54 million people, military budget decreases, global agenda is DEPOPULATION. I will keep you and your family in my prayers know we ARE NOT PEOPLE of this world but of Heaven, passing through a valley of tears. Cannot be guaranteed happiness in this life… but in the next?