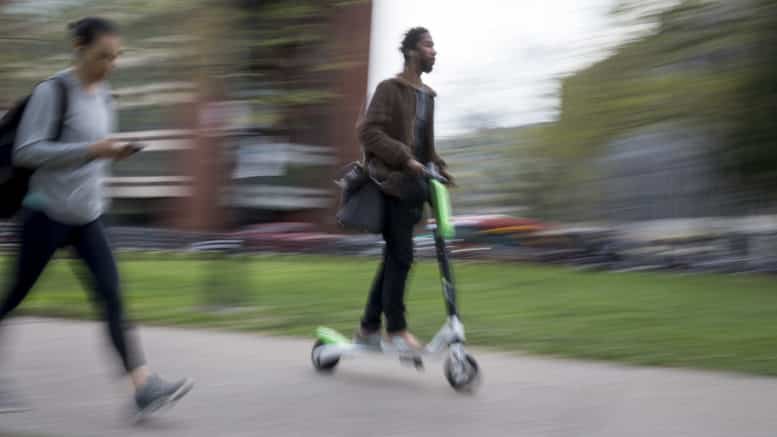 Please Share This Story!
PDF 📄
The UN’s Agenda 21 and 2030 Agenda are personified by this propaganda: “walking comes first, bicycles and scooters second and public transport third. Cars should only come in fourth place.” That’s right, you can walk wherever you need to go. ⁃ TN Editor

Last year, EU institutions agreed on new CO2 emission standards for cars and vans, and discussions are ongoing about limits for heavy-duty vehicles. The EU’s Energy Union Commissioner Maroš Šefčovič says the new rules will force the car industry to modernise and become more competitive on the world market. But others doubt the ability of carmakers to adapt. What do you think?

I agree with Mr Šefčovič. It can be done. The Croatian company Rimac Automobili founded by Mate Rimac is a good example. He is extremely innovative. He is considered a technological leader in his field. He focuses exclusively on sports cars, but his technologies can impact other industries as well. And they are spreading thanks to cooperation with other carmakers.

This example shows us, that even countries like Croatia can make the difference on a global level. It is very important to have leaders like this in Slovakia as well.

Yes, because they can pave the way for alternative producers that are coming to the market with innovations.

During the past ten years, China strongly supported “new energy vehicles”. Now, China is on the verge of becoming the global leader in this field. That is the so-called global competition that is threating our own industries.

If we do not realise this, Chinese carmakers will outcompete ours. In the next ten years, we will see massive development of e-mobility.

If we do not adapt, will we end up buying Chinese e-vehicles in Europe?

It’s possible, yes. One reason for modernising car manufacturing is boosting local production. Another is global competitiveness. The third and possibly most important reason is the ongoing shift in business models. It is not about cars as such anymore. It is about the charging infrastructure having an important position in the energy sector, because it is part of smart grids.

More importantly, we will see a transition to the shared economy. In the future, we will not own cars. Judged by efficiency, it is nonsense. Up to ten people can share one vehicle. The car industry argues that car making is expensive and difficult, that they don’t have enough production inputs for such a high number of cars. But why would they need to produce so many of them?

Maybe they will naturally come to that conclusion on their own. They will find out that not owning an automobile is more comfortable and cheaper. It will be a rational consumer decision. It just doesn’t make sense to pay ten times more for transport just because I want to own a car.

In the future, car ownership could end up being only reserved for super-luxury vehicles and super-rich people. But considering efficiency, it is definitely not the way to go. Transport networks will be optimised, emissions will be cut down. Sharing will allow cheaper and less time-consuming transport. Shared costs will make the way for new technologies.

Yet cities should allow mobility solutions, in which walking comes first, bicycles and scooters second and public transport third. Cars should only come in fourth place.

I am sure there are many places where this is true. Many where it is impossible

Rural America will never ever agree with this.Oh,that’s right,AGENDA 21 STACKS US IN THE CITIES LIKE CORD WOOD.

If anyone has ever had a one car family, they know the car means freedom to go where and when you want to go. Because you don’t have that.

No, individual transportation ownership will never, ever be totally supplanted by mass transport. Only under totalitarian rule. But today’s city folk believe so many things which are just not true, that we are headed that way.

“commissioners” (faceless fat people who wear thick glasses) and other shadow organizations who love communism will get into local power and try ram this down. Get your guns ready.

The entire US federal regime is a lawless, shadow organization. Many state and local “governments” too.

Their incompetent “management” has led to acknowledged deficit of 20+ trillion. Their criminal theft of 21+ trillion and subsequent classification after-the-fact is yet another crime to add to their standard operating procedure. Their 9/11 false flag cemented the coup and changed our “governance” completely. Washington’s foreign policy is nothing more than an international crime spree.

No doubt, everyone should be consuming less fuel, walking and biking more for a healthy body and leaving the car behind when possible. However, the article doesn’t state HOW their car revolution works outside a large city–huh? As usual, those who envision/fund changing the world do so from an ethnocentric POV (that of the indoctrinated globalist). They can’t or won’t see the BIG PICTURE. Example: The American continent, all it’s countries, is highly rural. The largest part of the population lives on either coast as on other continents but the population is spread over thousands of miles in-between. The economy… Read more »