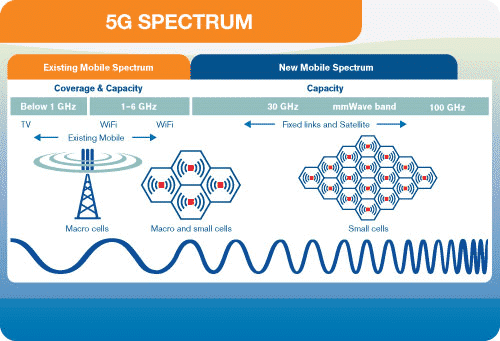 Technocrats are in hot pursuit of lighting up the Internet of Things by implementing 5G world-wide. This desire far outweighs any human health risks that are demonstratedly  present. To the Technocrat mind, human life has little value. ⁃ TN Editor

In recent months there’s been a lot of talk about 5G – the next generation of wireless technology. 5G is being touted as a necessary step to the ‘internet of things’ – a world in which our refrigerators alert us when we’re low on milk, our baby’s diapers tell us when they need to be changed, and Netflix is available everywhere, all the time. But what we’re not hearing is that evidence-based studies worldwide have clearly established the harmful effects of human exposure to pulsed radiofrequency radiation from cell towers, cell phones and other devices – and that 5G will make the problem exponentially worse.

Most people believe that the Federal Communications Commission (FCC) carefully assesses the health risks of these technologies before approving them. But in testimony taken by Senator Blumenthal of Connecticut, the FCC admitted it has not conducted any safety studies on 5G.

Telecom lobbyists assure us that guidelines already in place are adequate to protect the public. Those safety guidelines, however, are based on a 1996 study of how much a cell phone heated the head of an adult-sized plastic mannequin. This is problematic, for at least three reasons:

+ living organisms consist of highly complex and interdependent cells and tissue, not plastic.

+ those being exposed to radiofrequency radiation include fetuses, children, plants, and wildlife – not just adult male humans.

+ the frequencies used in the mannequin study were far lower than the exposures associated with 5G.

5G radiofrequency (RF) radiation uses a ‘cocktail’ of three types of radiation, ranging from relatively low-energy radio waves, microwave radiation with far more energy, and millimeter waves with vastly more energy (see below). The extremely high frequencies in 5G are where the biggest danger lies. While 4G frequencies go as high as 6 GHz, 5G exposes biological life to pulsed signals in the 30 GHz to 100 GHz range. The general public has never before been exposed to such high frequencies for long periods of time.

This is a big deal. It turns out that our eyes and our sweat ducts act as antennas for absorption of the higher-frequency 5G waves.[1] And because the distances these high-energy waves can travel is relatively short, transmitters will be required closer to homes and schools than earlier wireless technologies: the build-out will add the equivalent of a cell tower every 2-10 houses.

But former FCC Chairman Tom Wheeler has made it clear the Telecom-dominated FCC does not put health first: “Stay out of the way of technological development,” he said. “Unlike some countries, we do not believe we should spend the next couple of years studying… Turning innovators loose is far preferable to letting committees and regulators define the future. We won’t wait for the standards.” In response to questions about health concerns, Mr. Wheeler said: “Talk to the medical people”.[2]

The “medical people” have conducted over 2,000 international evidence-based studies that link health impacts with pulsed radiowave radiation from cell towers, routers, cell phones, tablets, and other wireless devices. These studies tell us that RF radiation is harmful at even low and short exposures, and that it impacts children and fetuses more rapidly than adults. Among the findings are that RF radiation is carcinogenic, causes DNA damage, affects fertility and the endocrine system, and has neurological impacts. Pulsed electromagnetic frequencies have also been shown to cause neurological symptoms: depression, anxiety, headaches, muscle pain, attention deficits, insomnia, dizziness, tinnitus, skin tingling, loss of appetite, and nausea.[3]

The U.S. Government has known of these risks since at least 1971, when the Naval Medical Research and Development Command published a bibliography containing 3,700 references reporting 100 biological and clinical effects attributed to microwave and radio-frequency radiation.

Recent findings, such as the $30 million 2018 U.S. National Toxicology Program (NTP) Study, have corroborated the findings of all well-designed heart and brain cancer studies of people with 10 or more years’ exposure to cellular radiation from cell towers and cell phones. They all agree: RF radiation causes cancer.[4]

What has been the response to these findings?

Scientists are urging the World Health Organization (WHO) to update its classification of RF from a Group 2B Carcinogen to a Class 1 carcinogen – making RF and 5G comparable to arsenic and asbestos. Annie Sasco, former Chief of WHO’s Research Unit of Epidemiology for Cancer Prevention, says, “Enough is enough, how many more deaths would be needed before serious action is taken? Evidence just continues to accumulate.”

Anyone with any knowledge of the work of Royal Raymond Rife in the 30s would be really freaking out. Dr Rife has filmed cells being destroyed by high frequency (through resonance), there’s video of that actually happening in front of your eyes, the cell just exploding. And if I’m not mistaken, the frequencies were in the 100GHz neighborhood. In his case, the frequencies were well researched and tuned to each specific microorganism (each has its own resonance frequency), so the frequency destroys only that. By the looks of it and the lack of research, not even God would know what… Read more »

Thanks for this comment on Rife. Very good information.

It’s been clear from the beginning of his ‘reign’ that Prince Tom Wheeler is a technocrat of a future evil empire scenario. We thought his predecessor was bad; he was. However, Wheeler is no improvement. He talks and acts like a mob boss. He hates the public–that is clear from his historical comments beginning day one of his FCC position. He is a hardliner with his Rothschild-like approach to gaining power over all things through technology. He works tirelessly for his masters knocking the public aside at every turn to support a profit-at-all-costs technology company vision. With someone like Wheeler… Read more »

But…don’t the sheeple deserve it? There is probably only 2-3% resistance people who deny it in their neighbourhood. The sheeple are smiling all over their faces and think they are on a “future” train. Researching the matter the only reason to find for this roll out is Agenda 21 and its sustainable 1 billion on the planet. Ultrasound Smart meters frequency give bleeding in ears on dolphins and whales. EMF Smart meters gives cancer, eye deceases, and autism. 5G should be even worse than the previous. A cocktail to kill the 6 billion middle class and leave the Royals and… Read more »

Well, that’s one position to take. I have felt so myself many times in great frustration because the 99% showed me they were docile, complicit, buyable and just plain stupid. However, I still have hope for them. Hope is a strange thing. The moment you think you’ve lost it you find a reason to continue.