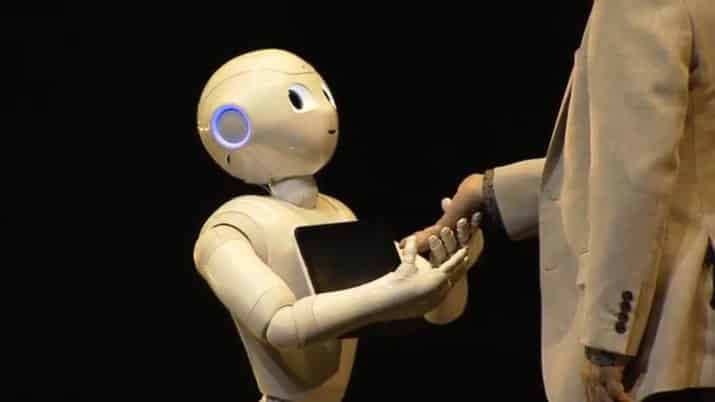 Please Share This Story!
PDF 📄
Is a robot worth more than a human? Apparently. The banking industry will soon be inundated with robots, displacing hundreds of thousands of human employees around the world, redefining the term “personal banking’ as an oxymoron. ⁃ TN Editor

Ground zero for the robot takeover of financial services is an HSBC branch in midtown Manhattan.

Here, crowds of camera phone-toting tourists cooed and clapped at Pepper, an adorable 4-foot-tall robot with a high-pitched voice and a tablet screen strapped to its chest, during a recent test run. HSBC executives are posting seven of the machines, created by SoftBank Robotics, in the lobby of their Fifth Avenue branch starting Tuesday to interact with customers and signal that the London-based bank is serious about technology.

“How may I help you?” Pepper asks in a cheerful voice, urging onlookers to select among a half-dozen options, including tutorials on self-service channels like mobile banking and ATMs.

In one demonstration, after pitching a credit card and summoning a human colleague to help close the deal, Pepper helped a user kill time by dancing hypnotically to a techno beat. The robot also poses for selfies and tells jokes.

After decades of portrayals in science fiction, robots are beginning to appear in everyday settings, doing menial tasks from vacuuming homes to flipping burgers. In finance, big banks including J.P. Morgan Chaseand Bank of America have focused on software rather than physical robots, pouring billions of dollars into artificial intelligence and machine learning to speed transactions, resolve complaints and improve service. HSBC is the first to employ humanoid robots in a U.S. bank branch.

“This is going to drive more people into the door,” said Pablo Sanchez, HSBC’s head of retail banking and wealth management for North America. “But once they’re in, it has to go beyond the gimmick. If it’s just people taking selfies, in two weeks that’ll be over. So we wanted to make sure it could do some really valuable things for our customers, educate them on our product set, be able to point them in the right direction.”

The bank, which worked with Softbank for six months to train Pepper, is tracking customers’ wait times and how well the robots are helping to sell more products and services, Sanchez said. If the machines help improve users’ experiences, the bank will roll them out to more of its 228 U.S. branches. Locations in California including Cupertino and Silicon Valley are next in line to get the robots.

The bank plans to gradually increase Pepper’s capabilities, allowing users to complete product applications on its tablet, and eventually introduce other improvements to its branches. HSBC spent $131 million on the robots and other upgrades, including voice identification and new digital banking apps.