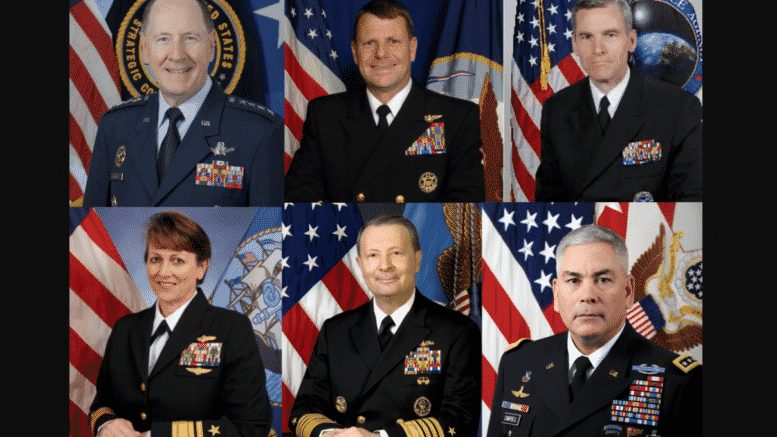 Posted By: Jeremy Loffredo and Max Blumenthal via The Gray Zone November 4, 2021

Please Share This Story!
PDF 📄
This is an absolutely must-read article to understand the meaning of the phrase, “Deep State”.  America is being driven by unelected and unaccountable Technocrats clustered in private think-tanks that could not possibly exist in the public sector. All of it is unwittingly funded by taxpayers.

Collusion between the military and Big Tech was warned about by President Dwight D. Eisenhower in his farewell address. This has since morphed into the heart of what Shoshana Zuboff has described as “Surveillance Capitalism”, which is also a perfect description of modern Technocracy.  ⁃ TN Editor

Described as “the most important organization you’ve never heard of,” MITRE rakes in massive security state contracts to pioneer invasive spy tech. Now it’s at the heart of a campaign to implement digital vaccine passports.

While vaccine passports have been marketed as a boon to public health, promising safety, privacy, and convenience for those who have been vaccinated against Covid-19, the pivotal role a shadowy military-intelligence organization is playing in the push to implement the system in digital form has raised serious civil liberties concerns.

Known as MITRE, the organization is a non-profit corporation led almost entirely by military-intelligence professionals and sustained by sizable contracts with the Department of Defense, FBI, and national security sector.

The effort “to expand QR code vaccine passports beyond states like California and New York” now revolves around a public-private partnership known as the Vaccine Credential Initiative (VCI). And the VCI has reserved an instrumental role in its coalition for MITRE.

Described by Forbes as a “cloak and dagger [research and development] shop” that is “the most important organization you’ve never heard of,” MITRE has developed some of the most invasive surveillance technology in use by US spy agencies today. Among its most novel products is a system built for the FBI which captures individuals’ fingerprints from images posted on social media sites.

Elizabeth Renieris, the founding director of Notre Dame and IBM’s technology ethics lab, has warned that “as dominant technology and surveillance companies” like MITRE “pursue new revenue streams in healthcare and financial services…privately owned and operated ID systems with profit-maximizing business models threaten the privacy, security, and other fundamental rights of individuals and communities.”

Indeed, the involvement of the military-intelligence apparatus in the development of a digital vaccine passport system is yet another indication that behind the guise of public health concerns, the US surveillance state could be due to enhance its control over an increasingly restive population.

As detailed in the first installment of this series, tech oligarchs like Bill Gates and global capitalist policy hubs such as the World Economic Forum have advanced digital ID and electronic currency systems across the Global South in order to harvest data and profits from populations that were previously out of reach.

The advent of vaccine passports providing access to employment and public life has become the key vector for accelerating their agenda in the West. As the financial consulting firm, Aite-Novarica, declared this September, digital COVID-19 vaccine passports “expand the case for digital IDs beyond COVID-19 vaccination only, and potentially serve as a digital ID as a more comprehensive, universal source of identity information…”

As vaccine passports exclude millions across the West, sparking furious protests and wildcat strikes, the World Economic Forum (WEF) is working with its partners to implement them in digital form.

Italy's Green Pass in action: an old woman is turned away from medical exams at a hospital because she can't produce her mandatory "health" passport. These systems inherently discriminate against members of vulnerable groups and encourage private security overreach, as seen here. https://t.co/Y9Tr12A9jq

Led by German economist Klaus Schwab, who says he is leading a “Fourth Industrial Revolution” that is changing the way people “live, work, and relate to one another,” the WEF is an international network of some of the wealthiest and most politically powerful people on the planet. Based in Davos, Switzerland, the WEF positions itself as the thought leader of global capitalism.

In January 2021, several WEF partners, including Microsoft, Oracle, Salesforce, and other mega-corporations announced a coalition to launch the Vaccine Credential Initiative (VCI), which aims to institute QR code-based vaccine passports across the US.

The stated goal of the VCI is to implement a single “SMART Health Card” that could be recognized “across organizational and jurisdictional boundaries.”

A non-profit established by the Rockefeller Foundation and called The Commons Project is leading the lobbying push for digital SMART cards through the VCI it co-founded. And Commons Project CEO Paul Meyer happens to have been cultivated by the WEF as a “young leader.”

As one of the public faces of the VCI, Meyer markets the campaign’s agenda in the language of progressive inclusion, hammering consistently on themes like “empowerment” in public communications.

“The goal of the Vaccination Credential Initiative is to empower individuals with digital access to their vaccination records so they can use tools like CommonPass to safely return to travel, work, school, and life, while protecting their data privacy,” claimed Meyer.

In a press release announcing the formation of the VCI, MITRE echoed Meyer’s woke language, declaring that it had joined the partnership “to ensure that underserved populations have access to this [digital vaccine] verification.”

But what is MITRE, and why might an organization known for mass surveillance and military technology be at the center of an initiative that offers the possibility of unprecedented monitoring of the global population? The organization did not respond to emailed questions from The Grayzone about its participation in the VCI, however, its documented history makes for unsettling reading.

Based in Northern Virginia, MITRE is a military-intelligence think tank funded to the tune of $2 billion a year by US agencies including the US Department of Defense. It is led almost entirely by former Pentagon officials and ex-intelligence operatives.

MITRE was founded in 1958 as a joint project of the US Air Force and Massachusetts Institute of Technology (MIT) to develop ‘command and control’ systems for nuclear and conventional warfare, as the journal Science and Revolution noted.

In 1963, MITRE tapped a brilliant young linguist from MIT named Noam Chomsky, to assist the “development of a program to establish natural language as an operational language for command and control.” After a few years of work on projects like these, Chomsky said, “I couldn’t look myself in the mirror any more,” and thrust himself into antiwar activism.

MITRE=?(What do the letters stand for?)
Patrick Wood: Have you ever read or heard of “The Report From Iron Mountain on the Possibility and Desirability of Peace”, 1967 Dial Press?

Take anything Max Blumenthal says with a grain of salt. The son of Clinton Foundation employee and longtime Clinton aide Sidney Blumenthal.

Its easy to see the real goal for the tyrants ruining the world now is to place and implement as much AI systems as they can so ppl get used to it…the next phase/generation will go along with it as normal, and that will be when America is completely gone. no more. poof..
America will be run by science, or safety laws based on projected fear of everything.
The Constitution will be mute.
Its actually gone now, with checks and balances non existent.
The DOJ no longer defends American values or rule of law.

[…] >MITRE: The Military Intelligence Group That Drives The Push For Digital Vaccine Passport In America – Here are the anti-American “creatures” that are doing it […]

MITRE: The Military Intelligence Group That Drives The Push For Digital Vaccine Passport In America | Flurry of Thoughts

[…] Source: MITRE: The Military Intelligence Group That Drives The Push For Digital Vaccine Passport In America […]

And now, they’ve apparently hired Chomsky back to talk his way into the public with their new lies. I have to confess, if I looked like Chomsky I wouldn’t be able to look into the mirror either. He needs a bath, his hair brushed and his mouth washed out with DIAL soap.

These ‘military men’ are facilitating the murder of humanity while working under the US Constitution. They should be court-martialed and shot–in public.

MITRE: The Military Intelligence Group That Drives The Push For Digital Vaccine Passport In America | EndTheIllusion.com

Much of this noise was setup by the snake Leon Pannettz. Initially in congress and on up to heading AlCiAda. ‘Ol Leo site on the board of MITRE. They are also in big with household ‘smart’ meters. With all the reportedly strange events with fires lately from foremen, houses burning to a white ash (which previously was unheard of), who could see a problem with this company kontrolling the other end of people’s lives?