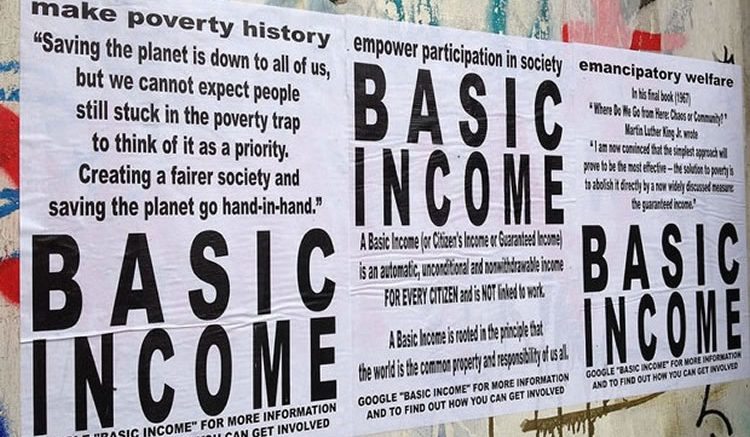 Please Share This Story!
PDF 📄
Universal Basic Income was an original tenet of 1930s Technocracy, but every UBI experiment in modern days has failed. Nevertheless, thirty more mayors have stepped up to the plate to push for UBI. Governments have no source of income to pay for UBI, but that is overlooked. ⁃ TN Editor

In Martin Luther King Jr.’s 1967 book “Where Do We Go From Here: Chaos or Community?” the civil rights leader discussed how to best address poverty in the United States.

“I am now convinced that the simplest approach will prove to be the most effective — the solution to poverty is to abolish it directly by a now widely discussed measure: the guaranteed income,” he wrote.

King was not the first to propose a guaranteed income; political philosophers from Montesque to Thomas Paine also penned their support for what is often referred to as “universal basic income.” And the idea was recently re-popularized by former Democratic presidential candidate and current New York City mayoral candidate Andrew Yang.

However, King stands out as the most visible influence on Mayors for a Guaranteed Income, a coalition of 30 mayors from Texas to Minnesota, who support direct, recurring cash payments for citizens and are starting guaranteed income programs of their own. The organization prominently features King’s words on its website, describing its mission as “rooted” in the civil rights leader’s legacy.

Mayors for a Guaranteed Income, sometimes called “MGI,” was founded by Michael D. Tubbs, then-mayor of Stockton, California in June 2020 after his city launched, and later extended, a basic income program where 125 residents received $500 monthly thanks to funding from the Economic Security Project, a nonprofit that supports other guaranteed income experiments.

CNBC Make It recently spoke with mayors who are pushing the guaranteed income movement forward in their cities — and giving out thousands of dollars in the process.

“When you look at 2020 and the inequities that have been illuminated this year, you’ve also seen the injustices that a lot of Black and Brown people have encountered for generations. It’s systemic,” says Levar Stoney, mayor of Richmond, Virginia where the city is piloting a program in which citizens will receive $500 a month for 24 months. “Some people may think this is a radical idea, but I think there’s nothing radical about helping people.”

Currently, 18 Richmond families have been confirmed for participation after being randomly selected from a pool of Office of Community Wealth Building clients who the city has determined suffer from a “cliff effect” where the family makes too much money to qualify for federal benefits but not enough to live comfortably as measured by the region’s living wage. The city sent a list of participants who met that criteria to an independent research team at the University of Pennsylvania Center for Guaranteed Income Research, who performed a random selection.

Stoney says that his childhood has impacted his support of guaranteed income.

“My father was a high school custodian who did not have a high school education. My grandmother was a domestic laborer working in people’s homes. I was raised on my grandmother’s Social Security check and my dad’s very low working-class salary. As a child, I handled the finances for my family. I had to call the bank and would check and see how much money was in the checking account and sometimes they would tell me we only had $30 left,” he says. “The reason I became a supporter of MGI was because I thought about what my grandmother could have done with that extra $500 a month. It would’ve meant more food and the ability for us to pay our bills.”

The so-called Richmond Resilience Initiative is funded through CARES Act dollars, a $240,000 gift from the Robins Foundation, and a recent $500,000 donation from Mayors for a Guaranteed Income, which was itself funded by a $15 million gift by Twitter CEO Jack Dorsey.

City representatives say that the most recent award of funding will allow the program to expand to include up to 55 families in total.

“For me, this fits right into our justice and equity agenda — ensuring that people don’t fall through the cracks,” says Stoney. “In Richmond, roughly 21% of the population lives under the poverty line and I believe that they, too, deserve the best that Richmond has to offer.”

own nothing and be happy…

Right on que, they all stand together after getting their orders, YEA.. UBI…. after they deliberately made you loose your livlihood or business with no compensation what so ever , now they want to give you a pittance, but to accept it you give up your deeds to a house or property, and you will be HAPPY, as they make billions from your wealth and security theft.. These stanic creatures bneed to dissolved.It gies against the human spirit and joy of life, they hate our imagination and free will, and think we are unworthy of any life at all, leaving… Read more »

Why did God allow poverty? Was it not so that we would cry out to Him? Universal distribution of wealth is an evil against God’s will. It is legalized theft.

Just goes to show you how much currency is really worth when they can just give it away. Why bother working for it at all? They can just print more, right? o_O eesh.

“ I had to call the bank and would check and see how much money was in the checking account and sometimes they would tell me we only had $30 left,” he says. “

I cringe every time I hear or read a comment like this. Schools ought to teach how to balance a checkbook/account, because a lot of parents aren’t doing it. To me, that is part of a parent’s job. Young children can do this, it is basic math.

Universal basic income is simply another trick and a trap of satan and his rulers to deceive the gullible. If politicians, bureaucrats and billionaires cared about supporting the world’s citizens from the cradle to the grave however. They would have been doing so long before I was ever born. No doubt in my mind that UBI will be based upon on a Chinese style social credit score system. Globalists leaders are licking their lips over a digital currency system where they will have total control over how much income you get if you get any. They are living for the… Read more »

I want a list of mayors who supported this filth.