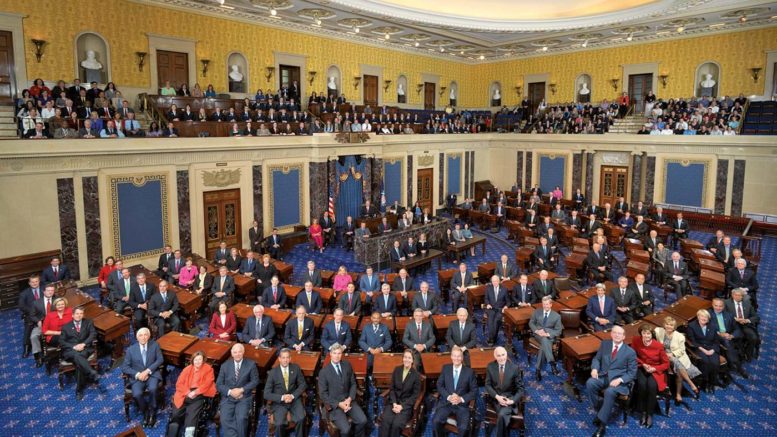 Please Share This Story!
PDF 📄
Cities across America have gone overboard on the UN’s push for ‘resiliency’, driven by panic over climate change. This pushes them all closer to calling for the Green New Deal. ⁃ TN Editor

A committee of 10 Democrats promised to continue studying climate change, holding more hearings and fostering partnerships with governments at all other levels as well as the private sector.

Pittsburgh Mayor Bill Peduto this week called for a “Marshall Plan for the Midwest” and a national challenge to fight climate change, while Honolulu Mayor Kirk Caldwell separately urged the creation of a federal department focused on resiliency.

The pair joined other mayors on Capitol Hill on Wednesday to testify before the first hearing of U.S. Senate Democrats’ Special Committee on the Climate Crisis.

Peduto said the plan would help every city and town left behind by the changing economy to create programs and jobs in renewable energy, build a cleaner economy and address the intersection of climate change and inequity.

“What needs to happen is there need to be federal programs created that aren’t just looking at how much our carbon reduction is, but what the economic benefit will be, what the opportunities for employment will be, how this will help areas that have been left behind,” Peduto said.

The partnerships and collaboration harnessed by the U.S. Department of Transportation’s (USDOT) Smart City Challenge, won by Columbus, OH in 2016, could serve as a model for the battle against climate change, Peduto said.

He added that giving cities and regional groups the opportunity to compete for grant money could be further incentive to look to the future under a contest that could involve “[coming] up with what the next area of transportation will look like that would benefit the planet and people and others, and then forcing us to create partnerships within our own cities to be able to look at a $50 million grant.”

Caldwell and Peduto testified before the committee alongside St. Paul, MN Mayor Melvin Carter, Atlanta Mayor Keisha Lance Bottoms and Portland, OR Mayor Ted Wheeler, addressing cities’ efforts to battle climate change in the face of the federal government’s inaction on the issue.

Government scientists and the United Nations’ Intergovernmental Panel on Climate Change (UN IPCC) have warned that time is running out for the world to act on climate change. But the onus has been on action at the local level after President Trump withdrew the United States from the Paris climate accord and rolled back numerous environmentally-friendly regulations.