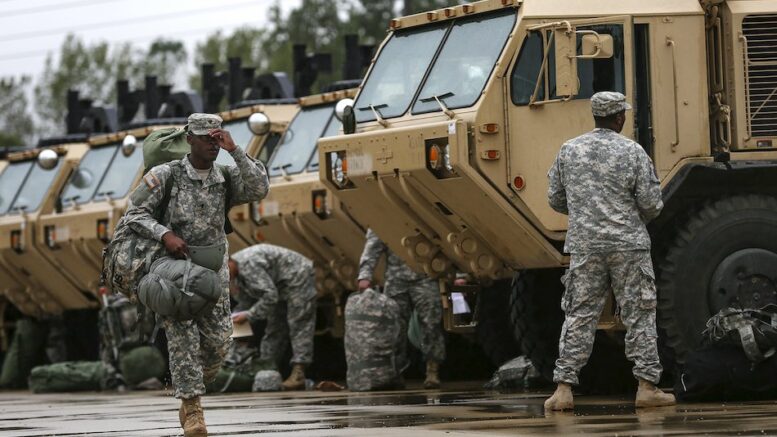 Please Share This Story!
PDF 📄
Technocrats at the CDC and Technocrats at the Pentagon are teaming with Technocrats at Big Pharma to deliver Technocrat-made vaccines to your body. Do you see the picture here? If you think people are scared now, just wait until military Humvees start rolling through the cities. ⁃ TN Editor

The plan breaks with the longstanding precedent that CDC distributes vaccines during major outbreaks through a centralized ordering system.

Nationwide distribution of any coronavirus vaccine will be a “joint venture” between the Centers for Disease Control and Prevention, which typically oversees vaccine allocation, and the Department of Defense, a senior administration official said today.

The Department of Defense “is handling all the logistics of getting the vaccines to the right place, at the right time, in the right condition,” the official said in a call with reporters, adding that CDC will remain in charge of tracking any side effects that emerge post-vaccination and “some of the communications through the state relationships [and] the state public health organizations.”

The plan breaks with the longstanding precedent that CDC distributes vaccines during major outbreaks — such as bad flu seasons — through a centralized ordering system for state and local health officials.

“We believe we’ve actually combined the best of both,” the official said. A second senior administration official stressed the agencies would be working as “one team” to distribute hundreds of millions of doses if any of the vaccines in development are approved in the coming months.

Private companies are also likely to join the effort. The first official said the government is bringing in people to integrate CDC IT capabilities with “some new applications that we’re going to need that the CDC never had.”

The background: The Pentagon will be guiding not just distribution logistics but also manufacturing and “kitting,” the process of safely packaging a vaccine with its necessary equipment such as syringes and needles.

“The DoD is handling all of those logistics — that is where their comparative advantage is,” said the first senior official. “And the CDC, some of their IT systems, relationships with the states following post-vaccination will belong to them.”

Pentagon chief spokesperson Jonathan Hoffman told reporters earlier in the day that distribution would be “a collaborative process” between the private sector and the military.

Operation Warp Speed, the government’s coronavirus vaccine and drug accelerator, is examining “how do we take advantage of the commercial capability of the private sector to handle things like distribution, and where will either DoD step in to help manage that process, or if necessary, will DoD be required to step in and actually physically deliver items itself,” Hoffman said.

If you are getting your information from Politico, then you are going to the wrong place. I would trust them as far as I can throw their computers.

Any story in the world that directly relates to Technocracy is likely to appear on Technocracy.News.

Darryl,i understand that,but this is a fact,that was already reported on many reliable news media,alternative,news,we know about operar=tion Warspeed,EO,from September 19,Trump said it in his own mouth and added,that many people will be vaccinated,very,very rapidly,he appointed Army General Gustave Pedra and Glaxon ,most crooked Executive,to partner with we are doomed from both sides,cau

Doesn’t matter. There’s a point made, and I’m for reading anything and everything about it, as I want to know, EVERY detail, the who, the how, the why, the when, and DEFINITELY, the “WHERE”, and etc etc. of ANY detail about the vaccines, because as soon as the “mandatory” vaccine comes around, I want to be ready to run and/or hide. I’m not letting “them” put those poisons in ME!! They’d have to catch me, and if they somehow do, they’ll have to take me kicking, and screaming!! The only other thing that could make me feel any stronger about,… Read more »

This will begin making people sick, they will have continuous inflammation from rna programmed dna in the cells. Many will be dead within 10 years.

according to Judy M. ,about 50 million,just for the start and the rest with horrible sufferings

With what “they” are going to be putting IN those vaccines, I’m going to sure be watching those, that get the vaccine! I’m sure betting that the MANY people who are volunteering (what dummies they are) for these experimentally vaccines, will definitely be having something happening to them, whether being sick, or something. And of course, no matter what bad or awful, or horrible symptoms they have, it’ll be said, that their just having virus symptoms, or “they” will come up with some crazy explanation, because they won’t want ANYONE to know, that these people are getting sick or dying… Read more »

This story does not say that the military will assist in actually administering the vaccines. We don’t want to make a mountain out of a molehill … yet.

Just think about all the intelligent folk, who know better, and will refuse getting these vaccine poisons, because they have the knowledge, of what’s in those vaccines, and KNOW what’s going on. They’ll be so many, that they’ll HAVE to call in the military, of that I have no doubt! Watch and see…!! But unfortunately, they’ll be more dumb ones, than smart ones, and those are the ones, that listen and do everything, that our government, and all their “alphabet organizations”, like the CDC, tell them to do. The ones that will happily stand in long lines, and give their… Read more »

The ‘mask’ is coming off faster than anyone would have expected.

I hadn’t heard anything about the military administering the covid19 vaccine during operation warp speed. It wouldn’t surprise me if they are instructed to do so. If the military will be used to distribute a vaccine. I can’t figure out why they would be needed for that. The ruling class need to cut the crap about caring about anyone’s health besides their own. Their policies are the cause of most human suffering and diseases to begin with. Personally I don’t need anyone tampering with my health or rearranging my DNA. I’ve been blessed and have learned enough to properly attend… Read more »

We should see both sides of an issue. I think this video is important as we need to be vigilant as to how evil things are getting. https://www.youtube.com/watch?time_continue=186&v=C65e1YSIcgA&feature=emb_logo