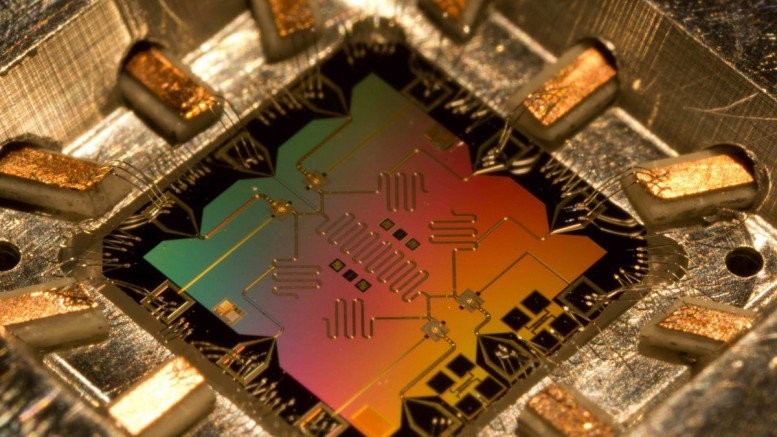 Please Share This Story!
PDF 📄
The usefulness of quantum computers is a hotly debated topic, from those who think it is quackery to others who say it’s the future of computing. Regardless, scientists are pouring billions of research dollars into proving commercial uses, such as a hack-proof quantum Internet. ⁃ TN Editor

The fast train from Paris to Rotterdam was an hour late leaving the Gare du Nord. When it finally deposited me in the Dutch city, I discovered that the onward train to Delft had been suspended because of maintenance work on the tracks. It took two circuitous bus journeys and a taxi ride before I finally made it to my destination.

Given that I was there to learn about the future of communications, this seemed appropriate. My trip was a reminder that while shipping people from place to place is still fraught with unforeseen glitches, gargantuan amounts of data flow smoothly and swiftly all day, every day through the fiber-optic cables connecting cities, countries, and entire continents.

And yet these data networks have a weakness: they can be hacked. Among the secret documents leaked a few years ago by US National Security Agency contractor Edward Snowden were ones showing that Western intelligence agencies had managed to tap into communication cables and spy on the vast amounts of traffic flowing through them.

The research institute I was visiting in Delft, QuTech, is working on a system that could make this kind of surveillance impossible. The idea is to harness quantum mechanics to create a flawlessly secure communications network between Delft and three other cities in the Netherlands by the end of 2020 (see map below for the planned links).

The QuTech researchers, led by Stephanie Wehner and Ronald Hanson, still face a number of daunting technical challenges. But if they succeed, their project could catalyze a future quantum internet—in much the same way that Arpanet, which the US Department of Defense created in the late 1960s, inspired the creation of the internet as we know it today.

The internet is vulnerable to the kind of hacking revealed by Snowden because data still travels over cables in the form of classical bits—a stream of electrical or optical pulses representing 1s and 0s. A hacker who manages to tap into the cables can read and copy those bits in transit.

The laws of quantum physics, on the other hand, allow a particle—for example, an atom, an electron, or (for transmitting along optical cables) a photon of light—to occupy a quantum state that represents a combination of 1 and 0 simultaneously. Such a particle is called a quantum bit, or qubit. When you try to observe a qubit, its state “collapses” to either 1 or 0. This, explains Wehner, means that if a hacker taps into a stream of qubits, the intruder both destroys the quantum information in that stream and leaves a clear signal that it’s been tampered with.

Because of this property, qubits have been used for quite some time to generate encryption keys in a process known as quantum key distribution (QKD). This involves sending data in classical form over a network, while the keys needed to decrypt the data are transmitted separately in a quantum state.

China has demonstrated some impressive applications of QKD. Last year, it used a satellite called Micius to transmit quantum keys to two ground stations, one in Beijing and the other in Vienna. The keys were then used to decrypt classical data for a secure video call between the two cities. Any attempt to intercept the communication containing the keys would have destroyed them, making it impossible for the spies (or anyone else) to decrypt the video call. China has also built a land-based QKD communications network from Beijing to Shanghai that banks and other companies are using to transmit sensitive commercial data.

However, the approach has limitations. Photons can be absorbed in the atmosphere or by materials in cables, which means they can typically travel for no more than a few tens of kilometers. The Beijing-Shanghai network gets around this by having 32 so-called “trusted nodes” at various points along it—similar to repeaters that amplify the signal in an ordinary data cable. At these nodes, keys are decrypted into classical form and then re-encrypted in a fresh quantum state for their journey to the next waypoint. But this means trusted nodes really shouldn’t be trusted. A hacker who breaches their security could copy the classical keys undetected, as could a company or government running the nodes.

Wehner, Hanson, and their colleagues at QuTech aim to overcome these limitations to build a completely secure quantum internet.

The approach they’re using is called quantum teleportation. This may sound like science fiction, but it’s an actual method of transmitting data. It relies on a phenomenon known as quantum entanglement.

Entanglement means creating a pair of qubits—photons of light, for this purpose—in a single quantum state, so that even if they travel off in opposite directions, they retain a quantum connection. Changing the state of one photon will instantaneously change the state of the other one in a predictable way, no matter how far apart they are. Albert Einstein called this “spooky action at a distance.”

Quantum teleportation, then, requires first sending a pair of entangled photons to two people—call them Alice and Bob. Alice receives her entangled photon and lets it interact with a “memory qubit” that holds data she wants to transmit to Bob. This interaction changes the state of her photon, and thus changes the state of Bob’s photon too. In effect, this “teleports” the data in Alice’s memory qubit from Alice’s photon to Bob’s. The illustration below lays out the process in a little more detail.

Another way to think of it: the entangled pair of photons are like the two ends of a virtual, one-time-only data cable. Each time Alice and Bob want to send data, they first receive a new cable, and because each of them holds one end, only they can use it. That’s what makes it secure from eavesdropping.